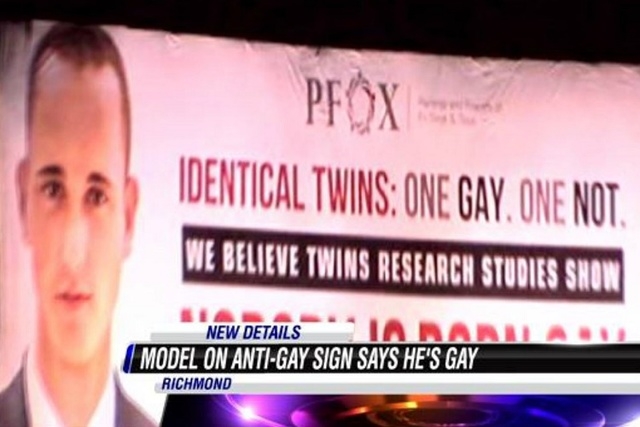 An already controversial billboard in Richmond, Va. is drawing even more attention after the openly-gay South African model featured spoke out about it.

The anti-gay billboard reads “Identical twins: One Gay. One not. We believe twins research studies show nobody is born gay.”

The billboard, paid for by a group called Parents and Friends of Ex-Gays and Gays, features a pair of male twins around the text.

Model Kyle Roux contacted NBC 12 calling himself an “out and proud” gay man and said the photo is over a decade old. He also said that he doesn’t have a twin.

“I was obviously quite shocked,” Roux said. “It just seems like there no place in today’s world for an organization that is promoting this as being some kind of deviant or distasteful lifestyle, because I’ve lived my life openly gay and happy for my entire life.”

A former board member for the group said the issue isn’t the photo, but the science behind the statement.

Roux said that he worries about teenagers struggling with their own sexuality and hopes to empower them.

It is unclear if anyone is pursuing the removal of the billboard.