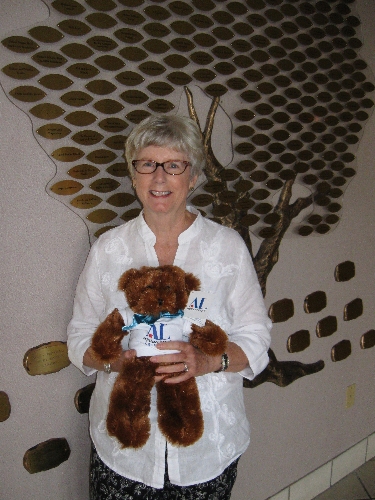 Since 1988, Las Vegas Metropolitan Police Department officers have equipped their squad cars with an unlikely accessory. In the trunk, nestled among the spike strips, traffic cones and crime scene tape, is a brown, fuzzy teddy bear.

Officers give the bears to children who have experienced a traumatic event, such as a robbery.

“We usually keep three or four (bears) in the trunk at all times,” said Jose Hernandez, a spokesman for the department and former patrol officer. “They’re useful. It’s nice to have them in the car with us.”

The furry friends are part of the Bear Program run by the nonprofit Assistance League of Las Vegas, 6446 W. Charleston Blvd.

The police department is one of 25 agencies in Las Vegas that receive the bears, including the valley’s fire departments and organizations such as The Shade Tree, 1 W. Owens Ave., and the Rape Crisis Center, 6375 W. Charleston Blvd.

The league provides bears as needed, year-round, with the goal of comforting children who are in crisis.

“The bears are so important; I can’t even explain,” said Joyce Carr, the Assistance League’s vice president of philanthropic programs. “It’s just something to hold, to have near, to love.”

Assistance League President Nancy Leslie has volunteered with the organization for seven years and has been the president for seven weeks. She said it is not just the traumatic event that can take a toll on a child.

“The police and firemen who give out the bears can be scary to children, too,” she said. “The bears help to ease their anxiety.”

In 2011, the nonprofit gave out 3,600 bears, each one dressed in a teddy bear-sized T-shirt with the organization’s logo. Every month, members dress an entire shipment of around 200 to 300 bears in shirts and bows.

“We want to give out as many bears as needed,” said Community Programs Chair Kathy Barnson. “But it’s always a good thing when there’s less of a need for them.”

Children brought in for immunizations are given a bear to help calm their nerves.

Low-income, expectant parents at the center are also given bears, as well as a set of clothing for the newborn.

“They make the mothers feel better,” Barnson said. “When the baby is born, the baby then has something to cherish.”

Last year, 576 newborns were given bears and a set of clothing.

The league purchases the bears with funding generated by grants, donations and income from its thrift store.

According to Public Relations Chair Karen Martin, the organization’s 256 members volunteered a total of 37,453 hours in 2011.

The seven programs implemented by the nonprofit are intended to comfort and enrich the lives of the community’s children, Barnson said, adding that one of the most rewarding parts of her work is when the organization receives thank you letters from those helped.

One woman, involved in a car accident in August 2011 that sent her to the hospital, wrote an email thanking the league for the bears her daughters were given at the scene of the accident.

“It is amazing how in the midst of a tragedy something as small as a bear can make all the difference,” she wrote.