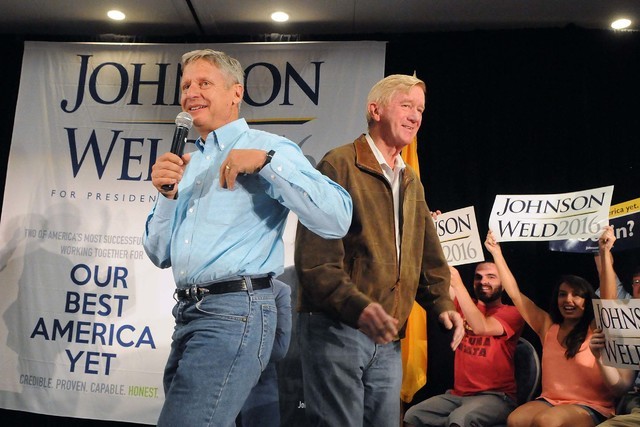 He didn’t make the cut to appear on the stage of the first presidential debate because of the Presidential Debate Commission’s criteria for an average of 15 percent or higher ranking in the average of five national polls. He has an average of 8.4 percent.

The Libertarian presidential candidate is still holding out hope for a prime-time moment in October, when two subsequent debates are planned, including the final one in Las Vegas on Oct. 19 at UNLV.

Johnson’s political luck might not change, even for Las Vegas. The former Republican governor of New Mexico will need to turn the tide in national polls quickly if he wants to see three podiums instead of two in Southern Nevada.

Yet his candidacy carries the potential to affect the outcome of the presidential election, particularly in Nevada, a Western state with an independent, libertarian streak that eschews government overreach. The Silver State’s six electoral votes could swing toward Democrat Hillary Clinton or Republican Donald Trump depending on how many votes Johnson siphons away from voters who are equally wary of either candidate in the White House.

Johnson’s campaign has a presence in Nevada, albeit on a smaller scale that doesn’t garner the media attention of a Trump rally or Clinton town hall.

The campaign has two offices in Las Vegas, and a third is likely to open in Reno, said Carlos Sierra, national field director for the campaign. Johnson himself has visited the state three times in recent months, including a town hall event for presidential campaigns in Las Vegas.

Five paid campaign staffers are in Nevada, and the state has “well over a couple thousand volunteers,” Sierra said.

A recent Monmouth University poll pegged Johnson’s support at 8 percent among 406 likely Nevada voters polled in September. That poll had a margin of error of 4.9 percentage points; 44 percent of voters supported Trump and 42 percent supported Clinton. The poll didn’t include Green Party candidate Jill Stein because she hasn’t qualified for the Nevada ballot.

Johnson’s run, combined with his Republican background, has the potential to attract GOP voters and turn the tide in a tight presidential race, said Fred Lokken, a political science professor at Truckee Meadows Community College in Reno.

“In a close presidential election it makes a difference, and especially if you’re down to a handful of states that ultimately decide the electoral count,” Lokken said.

Jason Weinman, national youth director for the Johnson campaign, has the job of building college chapters to mobilize youth. Three are in Nevada at UNLV, the College of Southern Nevada and the University of Nevada, Reno. He said he hopes to see national numbers reach the “low five-figures.”

Libertarians, including Johnson, espouse traditional Republican views such as limited government and spending, combined with Democratic social leanings such as being pro-choice and not opposed to gay marriage.

Weinman, who is also active in the Nevada Libertarian Party, said the party is working to grow. He said the time is right given the disenchantment with Clinton and Trump.

“People are sick and tired of the old parties and all the of the problems that have come with putting the same people in charge for so long,” he said.