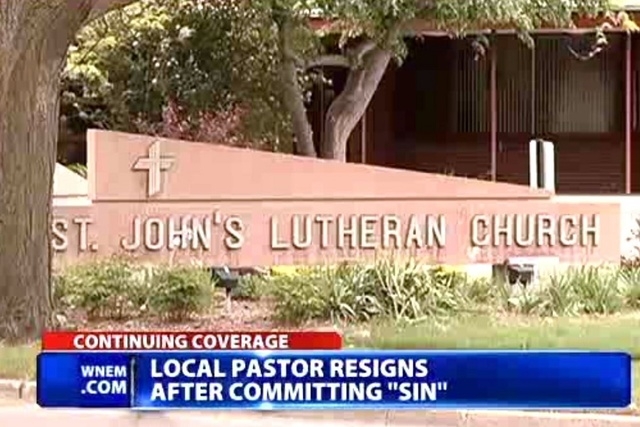 Makela, a husband and father of five has since resigned from his position at St. John’s Lutheran Church. (Screengrab, WNEM)

A mother came forward with new accusations against the local pastor who resigned after being outed as gay.

She said what that pastor told her son nearly drove him to suicide.

Jennifer Kish is angered over the recent revelation that Matthew Makela might be gay, not because of his alleged sexual preference, but because of how he treated her son while they were parishioners at his church.

Makela is a Midland pastor who resigned after being outed by a website. The website said it outed Makela because of his outspoken stance in recent years against homosexuality, a stance one woman said was particularly harmful to her family.

Jennifer Kish said her then 17-year-old son Tyler suffered from serious depression and was considering suicide because he was told by Makela he was going to hell because he was gay.

“If he was going to go to hell for being gay then he might as well go to hell by committing suicide,” Jennifer Kish said, regarding what Makela told her son.

Makela is the subject of scrutiny because of the alleged hypocrisy.

The website Queerty posted a conversation it claims shows Makela soliciting sex with another man on the app Grindr, an app geared toward gay and bisexual men.

The website Queerty said Makela confirmed it was in fact him in the Grindr conversation, but he didn’t offer anything further.

Makela, a husband and father of five has since resigned from his position at St. John’s Lutheran Church.

The website said Makela had been vocal on his own Facebook page about his strong beliefs against the LGBT community and same-sex marriage.

Jennifer Kish said the pastor also became vocal on social media about how he felt her son being gay was wrong and that as a parent she shouldn’t support him.

She said she confronted pastor Makela about the message he was sending her son and every other young gay person.

“Kinda set me into action, tell him what he could have done, other kids didn’t have a support system like Tyler had,” Jennifer Kish said.

TV5 could not reach Makela for comment on the matter, but St. John’s released a statement saying they are aware the pastor’s sin is out there for everyone to see. They want to remind people this was never about the details of the sin and they don’t matter. The statement goes on to say “we are hurting, but the God who is faithful will not forsake us.”

Tyler Kish said what Makela told him about homosexuality made him consider suicide.

“Deep down I think I knew what he was saying was wrong, but it was just hard being a kid and an adult telling you that,” Tyler Kish said.

He flushed with emotion when he thought back to the day he went to his pastor at Midland’s st. John’s church to tell him he was gay.

Tyler Kish said Makela told him the sin of being gay is no different than the sin of committing suicide.

Tyler Kish’s mom said she couldn’t believe the man they turned to for guidance would do that to her child.

“What I took away from it was that I needed to repent and hold on to the hope that God could change me,” Tyler said.

He said he felt worthless and was in fact contemplating suicide. Jennifer Kish was so angry she confronted Makela.

“He wasn’t understanding and it was a right or wrong thing for him and he really didn’t care how it affected Tyler,” she said.

Makela has set off a fire-storm of alleged hypocrisy on the internet. Pictures are surfacing of a shirtless Makela obtained by the website Queerty. They claim to be from a conversation on the gay app Grindr of Makela soliciting sex with another man.

The website claims Makela confirmed to them that he was indeed the one on the Grinder app and soon after he resigned from his role at the church.

For Tyler Kish, he can’t help but feel his pastor turned his back on him.

“Honestly feel very bad for him, because looking at it everything he was telling me, he was telling himself too, and I think that he was really kind of self destructing and hurting people around him,” Tyler Kish said.

A hurt that could’ve changed this family’s lives forever, but Tyler Kish said love conquers all and he has found it in his heart to forgive the person he once blamed for his darkest days.

“He may very well decide that it’s the sin, blame the sin, and try to fix himself, and I don’t think there’s anything to fix, and I wish him happiness, but only as his true self,” he said.