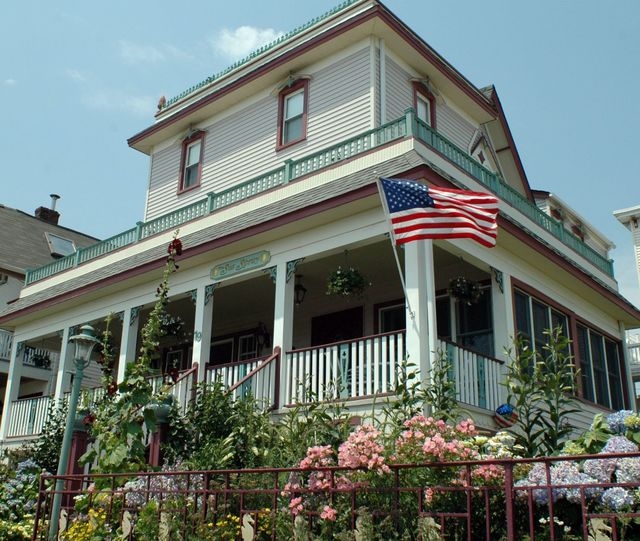 Hurricane Sandy caused The Sea Spray Inn, a bed and breakfast in Ocean Grove, N.J., to be shut down and evacuated. Innkeeper Mary Ellen Tellefsen and her husband lost their possessions; worked on cleaning it up every day, including two weeks without electricity; and competed for construction workers and an SBA loan. (Courtesy Sea Spray Inn)

Business owners often become very attached to their businesses, so much so that when a natural or man-made disaster strikes, causing huge losses, their tenacity and determination pull them through. This refusal to give up separates them from many workers in traditional jobs.

Superstorm Sandy whacked the Sea Spray Inn in Ocean Grove, N.J., a vacationers’ Victorian bed and breakfast built around 1875 that first served as a boarding house. Innkeeper Mary Ellen Tellefsen says Ocean Grove’s historic district has the nation’s most concentrated area of authentic Victorian architecture. Mandatory evacuation put Sea Spray out of business, but that wasn’t all. Because the Tellefsens live there, the 5 feet of water took away everything they owned, including childhood possessions. They and their dog lived with friends for six weeks.

John Drabkowski, vice president of operations and co-founder of Lightning Marketing Group LLC in North Miami Beach, Fla., tells of another disaster. Unethical search engine optimization practices by an outsourced company shut down his website, which offered concert tickets. After Google pushed the site to page 10, a four-month total of almost 1 million visitors subsequently dropped to nothing.

A fire from an unexplained industrial accident in a plant shut down PCI Synthesis Inc., a drug substance manufacturer in Newburyport, Mass. Chemical engineer Ed Price, the company’s president and CEO, says there were no serious injuries, just damage to the building, which he didn’t own, and equipment.

The entrepreneurs drove themselves. In the first two weeks of the cleanup, the Tellefsens survived without electricity and began five months of agony waiting for a Small Business Administration loan. They also competed with other businesses for construction resources to reopen in the spring. The question lingered: Would they declare bankruptcy or reopen?

For six months, Price couldn’t manufacture while he operated in another facility. His staff of 35 shrank to 18.

“Before the deal was closed in a new plant,” he says, “we were sending people to put systems in place (sandwiched between) calls to and from the owner, a chemical company in Norway. We couldn’t get it financed, because we were shut down.

“The site was also a mess,” he adds. “I signed a letter of intent to acquire the multimillion-dollar site and had 89 days to find financing.”

The down payment came from the insurance settlement, but two years passed before he bought the Norwegian company out.

The few visitors at Lightning Marketing from Yahoo and Bing didn’t cover monthly expenses for this heavy Google advertiser, which continued despite the shutdown of that part of the business. Drabkowski started over, renamed and branded the site redhotseats.com.

“This was it,” he says, “nine months of nothing. It was terrible.”

Each business owner had a different reason for persevering.

“It’s hard to give up something you put so much time in,” Price says.

Memories of 80 percent business travel for a Manhattan financial institution reminded Tellefsen that she’d found what she wanted to do in life — help people relax and enjoy the shore and have a lovely vacation.

Also, after three summers, the business was doing well.

“Knowing that the competition was still out there and we weren’t … we knew we could do it and knew we were better than some. You don’t want to hang your uniform up. You want to keep going.”