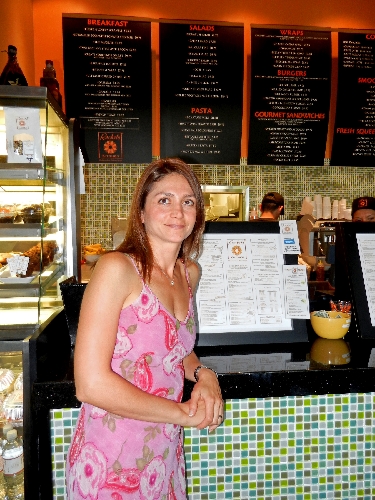 Rachel’s Kitchen is on the move, literally and figuratively.

Owner Debbie Sofer Roxarzade, who named the California-style bistro after her daughter, has found a new home for her restaurant at 3330 S. Hualapai Way, Suite 190. It originally opened in September 2006 at 3645 S. Town Center Drive, but that location was tiny, only 1,000 square feet.

It was so cramped, Roxarzade said she had to rent refrigerated storage space on Tropicana Avenue for supplies and food deliveries.

"It was bad from Day 1," she said. "We were going back and forth on a daily basis as we ran out of stuff. It was dysfunctional."

The new site, which opened July 28, has 2,100 square feet and seats 50 indoors and about 25 on its private patio. The first one could accommodate only 20 people inside, at best. The new site has plenty of space in back for storage. And it’s still in the Summerlin area, one of her criteria.

Fans who knew of the move followed her. Others found her again.

"Rachel’s was always our meet-up place," said Daphne Gastis, who was there chatting with friends. "I saw the sign when I went to Starbucks and said, ‘Ah, that’s where it went.’ So today I brought prisoners."

Another diner, there with prisoners of her own, remarked on the ambience.

"The staff is super friendly, and I love the healthy options," said Natasha Bello.

Rachel’s Kitchen is on the move in another way. Roxarzade is looking for franchisees to advance her brand further. Getting the franchise paperwork together while operating a business was a two-year process. She hired an attorney to handle the legal aspects, but a lot of the legwork fell to her.

She had to write manuals, outline procedures, specify suppliers and release her recipes. The last part was a leap of faith, as she has held her ingredients and preparation instructions close to the vest. But it had to be done to ensure consistency, she said.

"The last thing I want is for someone to have a salad and have it taste different (between locations)," she said.

Her first franchise leasee, Chris Connors, was a fan who opened a Rachel’s Kitchen in The District at Green Valley Ranch in 2009.

"And then the economy tanked," she said.

It wasn’t just the economy that stalled her plans. Roxarzade is careful about who will take the reins and open another location. As many as 50 people have approached her but didn’t make the grade for one reason or another.

She’s still looking and said she hopes to have 20 franchised locations, each 1,500 to 1,800 square feet, within the next five years.

Roxarzade said the timing was ripe for motivated people and that with so many restaurant vacancies and construction workers available for interior build-outs, a new location could cost $100,000 to $200,000 in startup costs, as opposed to $200,000 to $300,000.

What did she learn about herself?

"That I’m a crazy woman, that I have to stay focused and organized," she said. "It’s easy to get overwhelmed."