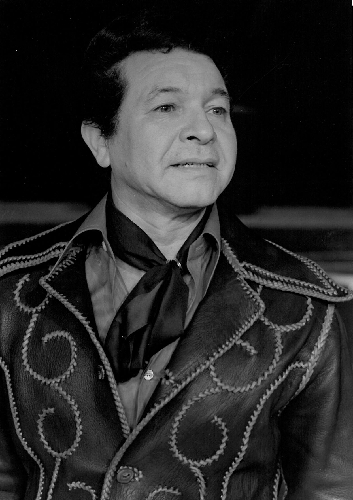 Joseph Wellington McIntosh, better known in the dance world as Rene de Haven, was born on May 8, 1922, on his father’s 100-acre farm just outside Tulsa, Okla.

They were Creek Indians, one of the six civilized tribes. His great-grandmother actually walked the “Trail of Tears” from Alabama to Tulsa.

He had a comfortable childhood, riding his father’s horses. He and his high school sweetheart had a son, Richard Hamilton, who was the world karate champion from 1996 to 1998, is a jet pilot and is gorgeous.

In 1942, Joe McIntosh joined the Navy in San Diego. When he left the Navy, he went to Hollywood. He had become well-known for Indian-style dancing. He joined the Lester Horton Dancers in Hollywood, then hooked up with beautiful blond dancer Sonny Knight, who was a friend of Bugsy Siegel.

Bugsy paid him to create a dance act for Sonny. Now Rene de Haven full time, he made it a couple act. The duo were booked all over Mexico and then South America in big, glamorous nightclubs, all the rage then. They were a star act.

So Rene was an international dance star before he came back to Hollywood, joined the Screen Actors Guild in 1951 and danced in many movies. He did the solo Indian dance in “Mohawk,” then did the same dance in “Foxfire,” starring Jeff Chandler.

The then-unknown Bob Fosse hired him for a big Bing Crosby film, “Give a Girl a Break,” with Debbie Reynolds. He also became known for choreography in Hollywood and then especially in Las Vegas.

Rene de Haven is now in hospice care at Golden Villa Care Home. Ministers Diane Thorne and Howie Maurer see him daily. His son Rick is there daily. The phone rings off the wall.

Everybody who knows Rene loves him, including me. He calls me “Lady Bunch.” He calls our friend Clair Fitzpatrick “Clair de Lune.” Joni Sailon is “Little Feathers.” And he never says goodbye. He says “Tri-La-La.”

Sal Angelica, who has danced in every great show on the Strip as well as Juliet Prowse’s act, says, “Rene helped so many people, singers and dancers, to find their place in our wonderful business. He mixed old and new and was still inventive.”

Rene told me his doctor said he would just get weaker and weaker, then drift away. He told his son Rick, who told me, that he didn’t mind going, he’d had a wonderful life that couldn’t have been better. And he’d always been curious about the other side.

Betty Bunch is a former dancer. Today, she works with the national Elderhostel Association. Contact her at bettybunch100@gmail.com.