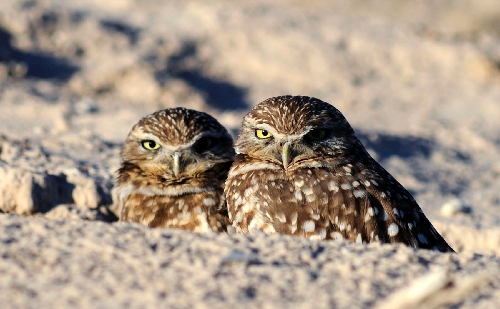 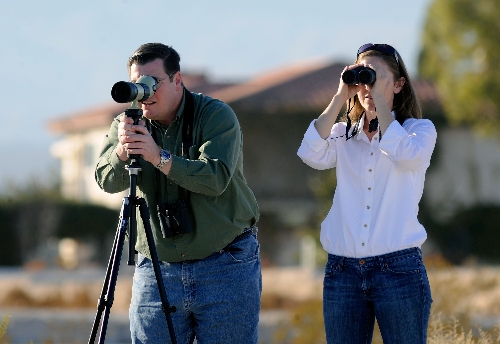 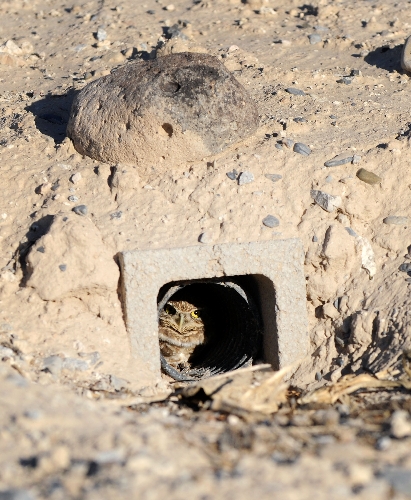 Give a hoot in the name of the western burrowing owl, the U.S. Fish and Wildlife Service asks.

For reasons unknown, dozens of the elusive dwellers call Centennial Hills home. Most of their human neighbors don’t even know that the small, camouflaged owls are there.

But for others, such as the Gilcrease Orchard and Centennial Hills resident Owen Nelson, a fondness of the owls prompted them to partner with the U.S. Fish and Wildlife Service and the Red Rock Audubon Society to raise awareness and protect the sensitive species.

Urban development is a major foe to the bird, as construction threatens to dwindle the burrowing owls’ numbers via habitat loss and destruction.

On a small scale, Nelson has shooed away those tampering with the burrows near his home, where he has monitored the situation for about 12 years.

Through his binoculars, he has marked their breeding habits and revel ed in their diurnal — active during the day — cycles. He has watched them "rest" on one leg, snatch up insects and small rodents and keep watch of their hawk predators. Nelson built an artificial burrow in his front yard welcoming the birds closer to his protective eye, but they haven’t taken him up on the offer.

He was a whistle-blower to the U.S. Fish and Wildlife Service when construction crews were about to blade over the birds’ homes, said biologist for the service Christiana Manville.

"During the development boom years of the early 2000s, it was a concern," she said. "We’d get calls from the public, (some) almost crying, about bulldozers approaching burrowing owls they’ve followed."

The calls prompted the service to draft a brochure for construction companies explaining how to easily comply with service regulations of the birds. Although not endangered, the western burrowing owl is considered a " bird of conservation concern" by the service.

Construction companies have been compliant with the service’s requests in the past.

"Nobody wants to hurt cute animals like this, and they were easy to work with," service spokesman Dan Balduini said. "But we had the boom bust and we don’t know how many are still in business. It’s kind of a hit-or-miss type of thing."

Through partnerships and volunteer efforts, the service has been able to keep record of the owls and relocate those whose homes were jeopardized by development. Last year, the service, the Red Rock Audubon Society and staffers at the Gilcrease Orchard built three artificial burrows for the birds.

Western burrowing owls typically claim the discarded burrows of the desert tortoise, the kit fox or the ground squirrel as homes for themselves, their mate and their average three to four chicks per litter.

The birds can adapt to artificial burrows if conditions are right, Manville said.

"They’re like us — they know their neighborhood," she said.

In February 2010, a pair of burrowing owls occupied the artificial burrows designated in the northeast corner of the orchard.

The owls have been a friend to the orchard, scooping up insects and lizards off crops, orchard director Mark Ruben said. During the busy pumpkin season, the owls’ artificial burrows were a destination for hayrides, he said.

The orchard is exploring expanding the educational potentials of its elusive tenants.

When flood control officials commenced work on a wash adjacent to the orchard last year, the fix to protect one burrowing owl was as easy as moving a fence 3 feet, Manville said.

In two parcels of undeveloped private land across from the Gilcrease Orchard, the groups arranged for the protection of about 10 owls sharing burrows.

"They will move and adapt to a new burrow with our help," Balduini said. "It doesn’t halt work. It’s kind of unique."

"It would be great to have as much community help," she said.

In 2008, Manville organized and developed the Urban Burrowing Owl Monitoring Project. At its peak, 35 volunteers helped keep watch of burrows for and with the service.

"I felt like I had to do something," she said. "I found people are really drawn to this species."

But the effort is short-staffed now, she said. Volunteers are still needed to keep watch or help install new burrows.

Manville said she’s also looking into grant funds to distribute the brochure more wildly and possibly band, or tag, the owls, for better records on their migratory patterns. She hopes more research will help better understand the species and why they flock to an urban area under such delicate circumstances. No matter what, she said, "It’s their home."