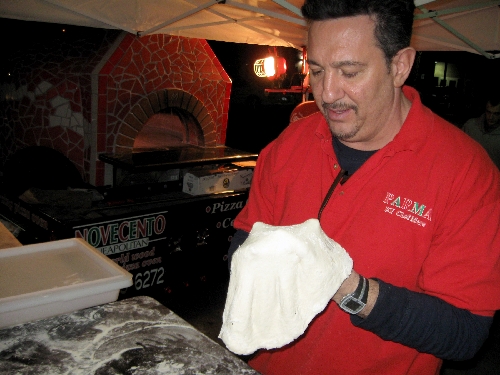 Since he opened his restaurant 2½ years ago, chef Marcus Scrizzi has quietly made the holidays a little more cheerful for those facing cancer by providing them with a free meal.

This past December, he gave away an estimated 60 meals, scattered throughout the month as people’s schedules — and health — allowed.

Most of them ate in the restaurant, Parma Pastavino & Deli, 7591 W. Washington Ave., choosing off the menu. About a dozen others were too sick, and the meals were prepared and packed, picked up and delivered by members of the Leukemia & Lymphoma Society. Any food restrictions were taken into consideration. Otherwise, Scrizzi selected easy-on-the-stomach items.

Indeed, the meal included salad, pasta, a main course and a dessert. It added up to about $45, all of it covered by the restaurant.

Fulgencio Garcia, 42, of North Las Vegas and his family were recipients. Garcia was diagnosed with a rare blood disease in 2005 and has been in and out of hospitals ever since. He is currently undergoing chemotherapy treatments. He was in the hospital and waiting for a bone marrow donor in late December. Doctors allowed him to go home for Christmas, an unexpected occurrence that caught his wife, Rachel, off guard.

Five meals from Parma arrived soon after — one for each of the parents, as well as their three boys, ages 5, 6 and 15.

“It was such a blessing because I wasn’t going to have dinner without my husband here,” said Rachel Garcia. “I didn’t even shop for a Christmas dinner … so it was touching that they offered it to a family who needed it.”

The meals are available to any cancer survivor who is currently in treatment, finished treatment within the last three months or has a financial need. The cancer patients must preregister with the LLS.

“We are providing these free meals to any cancer patient, not just those who are living with a blood cancer,” said Christina Goodman, patient services manager for LLS. “I have had referrals from Nevada Childhood Cancer Foundation, the VA and the American Cancer Society.”

She said patients were very grateful and appreciative.

Blood cancers took the lives of an estimated 53,000 people in 2010. Leukemia causes more deaths than any other cancer among children and young adults under the age of 20.

Scrizzi had his own battle with cancer. He was diagnosed with Hodgkin’s lymphoma at age 27.

He underwent surgery to have his spleen removed, followed up by 10 weeks of therapy treatments. Now, he’s giving back.

“One year, we took the meals to kids in the hospital,” he said. “They all sent thank you notes afterward. One said, ‘It was better than my mom’s cooking.’ “

Scrizzi said he plans to repeat the program in December.