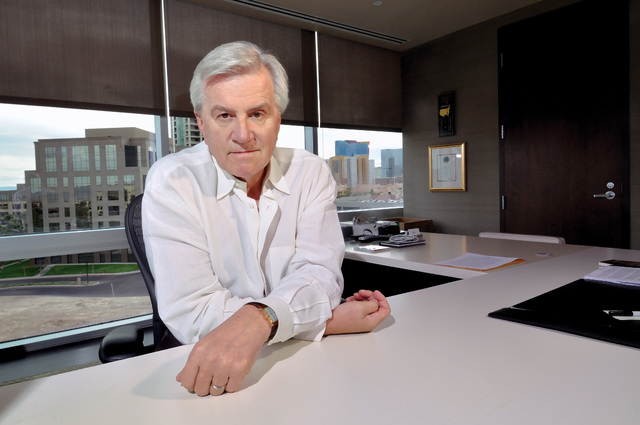 Longtime GOP ad man Sig Rogich on Monday stood by his contention that he came up with the 1988 campaign commercial making fun of Michael Dukakis, awkwardly smiling and popping his helmeted head out of a tank, after Fox News Chairman and CEO Roger Ailes publicly took credit for the spot.

Rogich, who was the director of advertising for the George H.W. Bush campaign at the time, was backed by Jim Weller, the creative director, who said he produced the ad in a Washington, D.C.-area studio based on Rogich’s original script.

Ailes’ role as head of the Bush campaign’s media team amounted to signing off on creating the ad and writing some of the superimposed text that appeared in the ad, according to Rogich and Weller.

“I wrote the first script for that commercial” after seeing news footage of Dukakis in the tank, Rogich said. “I took it to Jim Weller, who worked on rewriting it. The bottom line is, Roger Ailes would like to take credit for every great commercial ever produced, but the truth is he did not produce this commercial.”

Rogich said he started writing at about 1 a.m. and gave the first draft to Weller later that morning.

The controversy emerged after a Politico documentary on the ad won a regional Emmy, and Review-Journal columnist Steve Sebelius last week wrote up an interview he did with Rogich about how he came up with the 30-second spot. Sebelius stands by his column.

“I saw him in a helmet, and I thought it was the worst depiction of a presidential candidate I could imagine,” Rogich told Sebelius. “He didn’t look the part. … I saw him and I thought, ‘What a great commercial.’ ”

Stories over the years usually have credited Rogich with creating the Dukakis tank ad.

But in an email to Sebelius, an ad man named Rick Reed, who worked for Ailes, said it was his boss, not Rogich, who came up with the Dukakis tank spot in the middle of the night after seeing the news footage.

Reed was partners with Greg Stevens, who died in 2007 and who was credited with the ad in a Washington Post obituary.

“Sig Rogich had nothing whatsoever to do with this spot,” Reed wrote.

Reed also emailed the New York Observer, which wrote a story published Monday that concluded it was indeed Ailes and not Rogich who first thought of the ad and had it produced. The story quoted Reed and others who worked with Ailes, including his longtime aide and biographer, Jon Kraushar.

“I worked for 13 years with Roger, and during that time I was aware of every political spot he made. Roger saw the Dukakis news footage on the evening news and wrote the copy for the spot at 3 o’clock in the morning. He called Greg Stevens up and gave him not only the script but very specific editing instructions,” Kraushar told the Observer.

A spokeswoman for Ailes at Fox News backed up the story that Ailes had been behind the ad.

“Roger wrote and created the ad in its entirety,” Ailes spokeswoman Irena Briganti responded in an email to the Review-Journal. “It’s offensive for anyone in the business during that era to claim otherwise.”

Rogich said he believes Ailes is trying to protect his legacy as one of the great media strategists. He said Ailes called him when his unauthorized biography was being written and told him his staff thinks he should be taking credit for the Dukakis ad.

Rogich also questions Ailes’ allies for insisting the director of advertising for the Bush 1988 campaign didn’t have anything to do with a major closing ad of the campaign. Rogich said he was involved in every commercial, big or small.

“That just doesn’t make any sense,” he said. “It’s hard to convince me that the director of advertising wasn’t involved in an ad of that magnitude.”