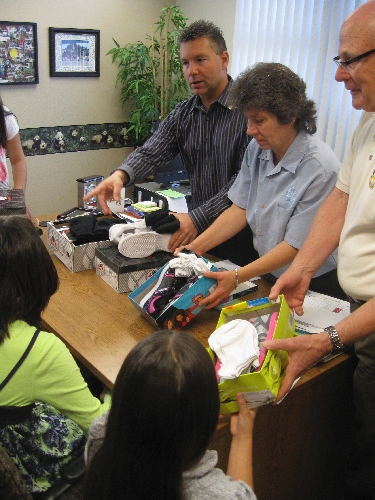 Since 1991, the club has distributed more than 10,000 pairs of shoes to needy North Las Vegas children via a program known as Happy Feet.

The scene when the child receives the new shoes and three pairs of socks is enough to change an outlook, club members said.

Among the first recipients were the three children of a single mother unable to purchase new shoes, Lillis said.

“It’s blown up from there,” Pote said.

The estimated 10,000 pairs of shoes have been donated since to students at 11 North Las Vegas schools and the Boys & Girls Club James Clubhouse, 2530 E. Carey Ave.

Despite an instant and steady reception, the club has struggled to keep up with demand in the wake of the economic downtown.

“We are hurting in our fundraising and income,” Lillis said. “Our motto is ‘Service above self.’ Our goal is to serve.”

The program is year-round, but half of all shoe orders are received within the first two months of school. The second strongest wave is midyear, around January, said club member and Happy Feet coordinator Kenneth Skelton.

Each pair of shoes costs about $15, and most are donated by a large-scale shoe retailer, Skelton said. The club needs monetary donations to help the program keep momentum.

Pote said he was a proponent of the club keeping a low profile for Happy Feet.

“We wanted to protect the privacy of the child,” he said. “I think now it’s time people know about Happy Feet and know the difference it’s made in the North Las Vegas schools.”

Many of the 13 Rotary clubs in the valley and some abroad have adopted a version of the program, Pote said.

Happy Feet officials work closely with school officials, who target needy students. Many have outgrown their shoes or are running around with duct tape keeping the soles on, Pote said.

Pote said he has found that the gift of a pair of new shoes provides some fringe benefits, too.

“The kids are really appreciative,” he said. “That’s how I got hooked into it.”