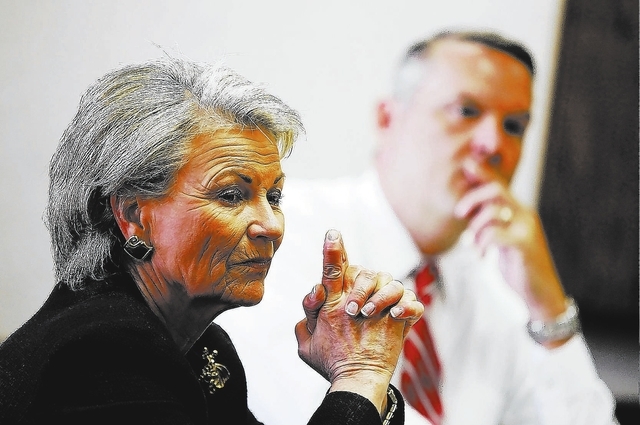 Maybe some complaints will surface next year, when higher water bills begin to land in local mailboxes.

On Thursday, though, Southern Nevada Water Authority board members received virtually no opposition as they voted unanimously to raise rates starting in January to pay down two decades of construction debt totaling more than $3 billion.

“We have a legal obligation to pay this money,” board member and Clark County Commissioner Steve Sisolak said. “We can’t just kick the can down the road. … It’s our responsibility to start making some payments.”

All customers, from the smallest home to the largest resort, will see their bills go up by a similar proportion, though the exact dollar amount will vary widely based on the size of a property’s water line and how much water is used.

The new rates will be phased in gradually through 2017, so the average monthly water bill for a typical single-family home will rise by a little more than a dollar each year for the next four years.

About half of the rate hike comes in the form of a fixed monthly charge while the other half is based on consumption, so customers can save some money by using less water.

The change is not official yet. It must be ratified by the Las Vegas Valley Water District and the cities of Henderson, North Las Vegas and Boulder City, each of which will hold public hearings of their own in the coming months.

The increase is expected to bring in roughly $45 million a year by 2017 to help the authority make its yearly principal and interest payments, which are scheduled to increase by 80 percent over the next four years to $239 million annually.

Officials said the new rates also will help protect the authority’s credit rating by maintaining a reserve fund of at least $280 million — about one year’s worth of debt payments for the valley’s wholesale water supplier.

To fund major infrastructure projects, the authority used to rely on connection charges from new homes and businesses under a philosophy that growth should pay for growth.

But the agency saw its primary sources of both money and water dry up at the same time about five years ago, when the economy tanked in the midst of a record drought on the Colorado River.

By then, the valley’s wholesale water supplier had amassed $2.5 billion in debt during a building binge that included a second water treatment plant, a second intake pipe and pump station at Lake Mead and new water transmission lines to feed the valley’s newest neighborhoods.

The drought added another $817 million in debt, as the authority launched the most expensive construction project in its history: a new, 3-mile-long intake system to draw water from the deepest part of a shrinking Lake Mead.

It will mark the seventh rate hike for valley water customers in the past decade and the second in as many years.

Even with the increase, water rates in Las Vegas remain substantially lower than those in other Western cities such as Los Angeles, San Diego, San Francisco, Phoenix, Tucson, Ariz., and Santa Fe, N.M.

The committee was assembled more than a year ago after the authority launched a controversial new infrastructure surcharge that drew criticism from business leaders because it doubled and even tripled the bills of commercial properties with large water lines feeding fire sprinklers and hydrants.

A number of committee members attended Thursday’s meeting, and several of them spoke in support of the new rate plan and the lengthy process used to develop it.

The only person to speak against it was Ed Uehling, a frequent critic of the water authority and a regular at its meetings. He said the agency handpicked all the rate committee members “and — surprise! — they said yes to everything.”

Authority officials were certainly prepared to hear more public input than they did on Thursday. The meeting room was expanded to allow for a bigger audience, but most of the extra seats went unfilled.