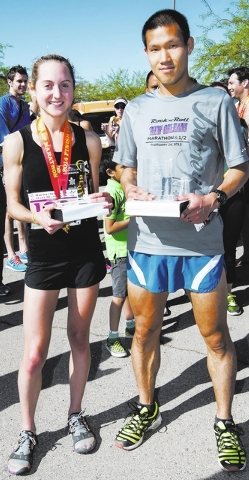 The 2014 Summerlin Half Marathon, in partnership with The Leukemia & Lymphoma Society, drew a record crowd of more than 500 runners who were primarily from Las Vegas, and also included participants from as far away as Canada, Turkey, Nova Scotia, South Africa, Australia and New Zealand. The 13.1 mile loop, which started and ended at JW Marriott, trekked through some of Summerlin’s most picturesque neighborhoods. The annual signature Summerlin event is open to the public and promotes an active lifestyle and healthy living that is paramount in Summerlin. This year included families from VCC, the contractor building The Shops at Summerlin and Team In Training, a training and fundraising team in support of LLS that raised more than $18,000 for blood cancer research.