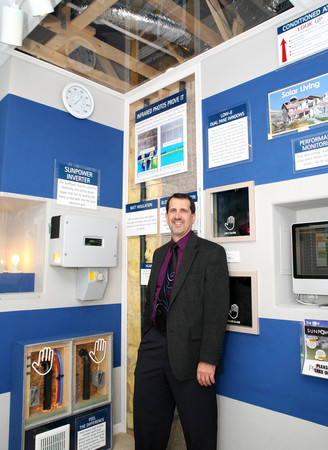 “In 2010, I’d like to see some stability return to the market. I’d like to see us get our arms around some of the major issues we’re grappling with, such as the (low) appraisals on new homes loaded with the latest features and technologies that are being compared with existing homes that may be bank repos and in poor condition.”

Hodgson was elected president of the Southern Nevada Home Builders Association, the oldest and largest trade association serving the residential construction industry in Nevada, and the local affiliate of the National Association of Home Builders based near Washington, D.C. According to Hodgson, the Las Vegas real estate industry continues to face unprecedented challenges, but also some rarely seen opportunities as well, such as extraordinary declines in land prices for builders and housing prices for buyers.

His background in the Marines, along with quality assurance work for the McDonnell Douglas Aircraft Co. and Pulte Homes has trained him to lead the home-building organization and industry, which are entering the fourth year of the worst housing and economic downturn since the Great Depression of the 1930s.

Hodgson, a native of Maryland, is the vice president of construction and customer service for Pulte Homes and Del Webb Communities, Las Vegas Division. He is the first representative of a publicly traded, national home-building corporation to serve as president of the association. Past presidents were the owners or top executives at privately held local companies.

For a number of years, Pulte Homes has ranked among the largest home builders in terms of sales in Southern Nevada, and also enjoys consistently high rankings in the annual J.D. Power and Associates new-home builder customer satisfaction studies.

He joined the local home builder association in October 1998 and became involved in the association’s work on behalf of the industry and home buyers. He has served as a member and chairman of committees, including codes, energy conservation, utilities and offsites, quality assurance, community planning and development, legislative and green building. He has also served on the board of directors and executive committee. He is a recipient of the Builder Member of the Year Award for outstanding service to the association and the industry. He also received a prestigious Spike Award for his successful efforts to recruit new members to the association.

As a member of the green-building committee in the mid-2000s, Hodgson was instrumental in the formation of the Southern Nevada Green Building Partnership, a joint program of SNHBA and the Green Building Initiative of Portland, Ore. Pulte Homes was the first major builder to enroll in the program and produce verifiable, certified green homes.

In October 2008, Gov. Jim Gibbons appointed Hodgson to serve on the Nevada State Contractors Board, a state agency charged with promoting public confidence and trust in the competence and integrity of contractors, and to protect the health, safety and welfare of the public.

Hodgson recently sat down with Monica Caruso, SNHBA director of public affairs, to answer a few questions as he begins his tenure as president.

A: No one has a crystal ball, but I can tell you that I hope to see some stability return to the industry. We’re still dealing with a lot of the same issues relative to the downturn in the economy and the housing industry. The good news is that local home builders are looking for finished lots because product needs to be ready when demand finally does increase.

Q: What are your goals as president of the association?

A: My main goal is to lead us back to recovery. I plan to be very involved in the issues that are critical to our existence. We need to resolve the problem of low appraisals, which has been a huge challenge for the industry. There’s no real, actual system for determining the value of a house like we have with determining the value of a car. It’s an archaic system of considering the sales prices in the surrounding area, so they’re valuating brand-new homes with trashed repos (repossessed houses). We need a more empirical, methodical system for the valuation of houses, something like the Kelly Blue Book system for valuation of automobiles. Appraisers need guidelines and standards to determine the value of a home. That would blunt the negativity of inflated appraisals and low-ball appraisals. The association has a special appraisal committee, headed by builder David McEntire of Amstar Homes, to deal with that issue, and we’re going to continue working on it this year.

We’re facing the adoption of new building codes that as of right now will add about $5,800 per floor plan, per municipality, to the cost of building a home, and that’s just for the engineering and plans-approval process. After that, there’s the potential the new codes will add another few thousand dollars more to the cost of a new home.

We have to make a strong case to the local governments to streamline the entitlement and plans-approval process to keep costs down for the industry, the home buyers and the municipalities, too.

And, we’re still fighting the construction defect litigation battle. It’s the biggest, worse issue in our industry. I’m committed to continue our fight to resolve this problem once and for all. The system we have in place isn’t helping anyone except a handful of trial lawyers. This can’t continue.

Q: Of what benefit is the association to its members and the home-building industry?

A: The Southern Nevada Home Builders Association is a strong organization representing its members’ interests with the governments, the public and others. Over the years, I’ve learned that there really is strength in numbers when you want to get something done. It costs less, and it’s more efficient, to solve our common problems, and achieve our common goals, through a united effort, which is handled by the association. It’s impossible, expensive and time-consuming for an individual company to keep up with all the issues impacting the business. The association promotes the principals of the free enterprise system, and works to protect and advance the interest of the building industry and the related trades.

Q. Of what benefit is the association to our community?

A: The association is looking out for the interests of the home buyers and new-home owners in our community. It’s our goal to enhance the quality of life in this community by meeting the community’s need for affordable, quality housing, and we’re working on that every day. We’re building this city. When we drive around, we take great pride in seeing our projects when they’re completed and families are enjoying life. They’re beautiful contributions to the character and identity of this community. People in this community can feel good about having a strong, quality and ethical home-building industry organization looking out for them.