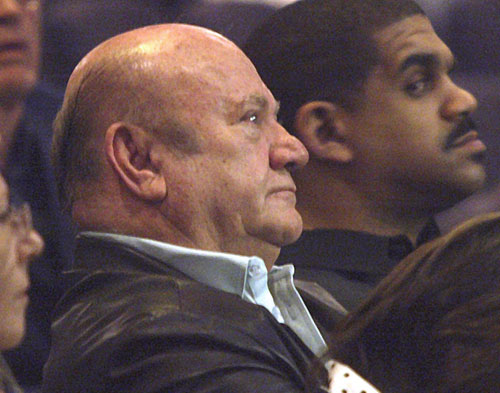 The Las Vegas pantheon of topless saloon bosses is an eccentric bunch. Few have enjoyed as much success combining skinny girls and whiskey as Jack Galardi.

Galardi died Saturday at his Circle G Ranch outside Jackson, Ga., in a place called Flovilla. Services are set for noon Saturday, Dec. 8, at St. Mary’s Church in Jackson. Galardi will be buried on his Circle G Ranch.

The ranch played host to a large number of his old Las Vegas pals over the years, judges and cops among them. Although Galardi at one time possessed 30 topless cabarets from Las Vegas to Miami, at the time of his death at 81 he owned nine clubs, including Cheetahs, a short cab ride from the Strip.

In recent years Galardi battled the ravages of age in the form of a variety of medical maladies. He was diagnosed with nasopharyngeal cancer, underwent what was thought to be successful radiation treatment but then was faced with a series of complications, daughter Teri Galardi says. A lung was removed after a bout of pneumonia, but, his daughter says, “My father never complained. He always had a smile for every visitor. He was the bravest, strongest man I’ve ever known in my life.”

Consider the doting daughter a defender of Galardi’s rough-hewn character.

“He was not mafia-connected in any way,” she says. “He was a self-made man and a wonderful entrepreneur who helped hundreds of people. Many men came up to me and called me and told me he was more like a father to them than their own fathers."

Galardi’s image trouble, his loyal friends say, was that he emerged as the owner of the Paradise Road Crazy Horse after the violent demise in May 1981 of the club’s mobbed-up previous owner, Tony Albanese, whose head was found on a desert roadside. Authorities believed the previous owner had ties to the Bonanno crime family, and his murder was unrelated to the Crazy Horse.

That sort of image would tend to add to any legend.

These days, Galardi is probably best known locally as the adoptive father of Michael Galardi, a central figure in the FBI’s G-Sting public corruption case that sent four former Clark County Commissioners to prison. Jack Galardi was not implicated in the investigation.

Michael and Jack Galardi were not on speaking terms at the time of his death. Galardi family members appear to have distanced themselves from Michael.

The elder Galardi, a Korean War veteran, had his share of trouble with law enforcement as a young man. In recent years, he was compelled to defend his license at one club after some of his employees were criminally investigated, but through four decades in the business he navigated the treacherous legal and political waters successfully.

Perhaps it was only coincidence that he also maintained plenty of friendships in the local judicial and political arenas, employing a number of former Metro police veterans and remaining best friends with the late Municipal Judge Seymore Brown. Galardi’s Saturday backyard barbecues became must-attend events for many politicians seeking campaign funds, including a few who ascended to the statehouse and Congress.

Annabelle Stanford, the local Republican Party icon, befriended Galardi decades ago and sings his praises. He was not only a regular contributor (to both major parties, actually), but he was also a soft touch for charitable causes and a member of the Las Vegas Chamber of Commerce.

Stanford worked with Galardi on the design of Mr. G’s, his entrée into the tops-on nightclub scene in 1980s Las Vegas. Mr. G’s was popular with a younger crowd, and it also drew its share of free-spending outlaws.

Jack Galardi didn’t like reporters, certainly not this one, but he did have a soft spot for the late Review-Journal columnist Ned Day, who once marveled in print after two paychecks he’d lost while doing extensive late-night research at the old Crazy Horse were returned to him by one of the forthright ladies and courtesy of Mr. G.

Even before the G-Sting debacle Galardi had been moving the center of his operations from Las Vegas to Georgia and other Southern states. At the time of his death, he had nine clubs, four clubs operating in Miami.

Now family members will carry on in the place of the tough old topless bar boss.

“I know I can’t fill his shoes, but hopefully I can fulfill his wishes,” Teri Galardi says. “He was a great, great man and loved by many, many people.”