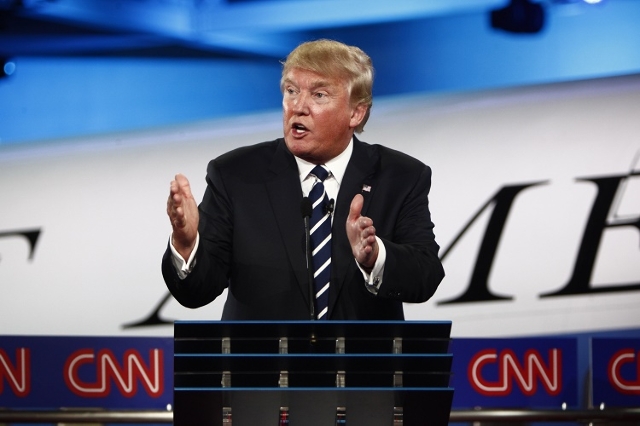 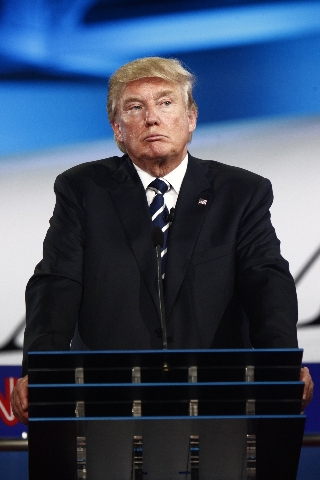 Donald Trump appears on stage at the CNN Republican Presidential Debate in Simi Valley, California on September 16, 2015.
WASHINGTON — Donald Trump came under fire Thursday night for his handling of a question at a town hall about when the U.S. can “get rid” of Muslims, declining to take issue with that premise and an assertion that President Barack Obama is Muslim.

“We have a problem in this country. It’s called Muslims,” an unidentified man who spoke at a question-and-answer town hall event in Rochester, New Hampshire asked the mogul. “You know our current president is one. You know he’s not even an American.”

A seemingly bewildered Trump interrupted the man, chuckling, “We need this question. This is the first question.”

“Anyway, we have training camps growing where they want to kill us,” the man, wearing a “Trump” T-shirt, continued. “That’s my question: When can we get rid of them?”

The real estate mogul did not correct the questioner about his claims about Obama before moving on to another audience member.

“GOP front-runner Donald Trump’s racism knows no bounds. This is certainly horrendous, but unfortunately unsurprising given what we have seen already. The vile rhetoric coming from the GOP candidates is appalling,” Schultz said. “(Republicans) should be ashamed, and all Republican presidential candidates must denounce Trump’s comments immediately or will be tacitly agreeing with him.”

After the event, several reporters asked Trump why he didn’t challenge the questioner’s assertions. Trump did not answer.

But Corey Lewandowski, Trump’s campaign manager, later told CNN that the candidate did not hear the question about Obama being a Muslim.

“All he heard was a question about training camps, which he said we have to look into,” Lewandowski said. “The media want to make this an issue about Obama, but it’s about him waging a war on Christianity.”

Obama, who has spoken openly about his Christian faith, was born to an American mother and Kenyan father in Hawaii. But Trump has been one of the leading skeptics of Obama’s birthplace, saying he did not know where Obama was born as recently as July.

A recent CNN/ORC poll found 29 percent of Americans believe Obama is a Muslim, including 43 percent of Republicans.

Trump is not the first Republican candidate to raise eyebrows over comments involving Obama and his ethnic and religious background. In February, Wisconsin Gov. Scott Walker became embroiled in a brief controversy when he told The Washington Post that he didn’t know if Obama was a Christian.

“I’ve never asked him that,” Walker said. A spokeswoman later clarified that he did believe Obama was Christian, but disagreed with the media’s obsession with “gotcha” questions.

And in 2008, Republican presidential nominee John McCain was booed after he famously told an audience member at a campaign event that Obama was a “good family man.”

“He’s a decent family man … (a) citizen that I just happen to have disagreements with on fundamental issues,” McCain said then. “That’s what this campaign is all about.”