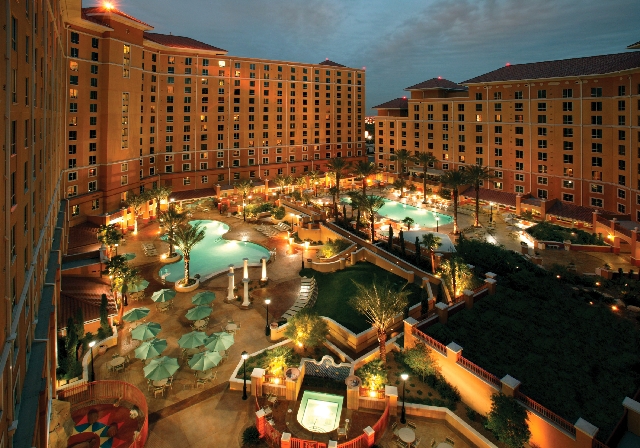 There’s no two ways about it. The recession took its toll on the vacation ownership, or time-share, industry.

Today, however, vacation ownership companies are back on track, with many acquiring new resorts, expanding their properties and hiring personnel.

“We have been recognized as being one of the best places to work in Southern Nevada, and we are definitely hiring. We are definitely looking for sales and marketing professionals,” said Katherine Russo, a director of talent acquisition for Wyndham.

John Gerhart, regional recruiting manager for Las Vegas, Colorado, Utah and Arizona for Wyndham Vacation Ownership, said parent company has rebounded quite well after the recession, citing a resurgent stock price since a $2.80 low in 2008. The stock was trading above $63 per share this week.

Business is booming, he said, and “we just flat out need more people” to handle growing numbers of appointments at Wyndham’s five vacation resorts in Las Vegas. These include the Grand Desert and the Worldmark Tropicana.

Many of the open positions are in sales, which can be a lucrative position, according to Gerhart and Russo. Typical starting earnings for successful salespeople will be $60,000 to $110,000, but can go much higher.

Job candidates don’t necessarily have to have a strong background in vacation-ownership sales or even sales. “We are looking for people with vibrant, upbeat personalities who can relate to people, who can connect to people and who are not afraid of negotiation or rejection,” she said.

Gerhart said the product is a logical, no-brainer for many vacationers. It’s a choice between staying in a hotel room or a vacation ownership resort property with larger accommodations of one-, two- or three-bedrooms, a kitchen and other amenities.

“It’s just a nicer way to vacation,” he said. “It’s larger, it’s less expensive, and they own it and can pass it on to their children.”

Both Gerhart and Russo said working for Wyndham is rewarding. “We’re talking to people on vacation, in happy mode, about making a difference in their lives and making their lives better,” Gerhart said.

Diamond Resorts International also is on a growth trajectory, according to Stevi Wara, company spokeswoman.

“We’ve really been growing the past two years,” Wara said.

The company has 270 managed and affiliated resorts, and services more than 490,000 owners of vacation time shares. In Las Vegas, the company’s resorts include Desert Paradise, Polo Towers and Cancun Resort, in addition to two corporate headquarters locations in Summerlin.

“We’re always recruiting. We’re always looking to hire,” Wara said, adding sales and marketing, resort operations and hospitality positions are among the hiring categories. “It’s very diverse. What’s really fun is we have a lot of additional areas for expansion where we’re looking to grow. We’re doing well with our acquisitions,” she said.

The most recent acquisitions include Pacific Monarch Resorts, adding nine locations to Diamond’s resort network and Aegean Blue Holdings, adding five resorts on the Greek islands of Rhodes and Crete to its resort network.

A career with Diamond offers opportunity for advancement, Wara said, because the company is committed to promoting from its ranks. “That’s important to us — to look to recruit from within.”

In general, Wara said, Diamond is looking for potential employees who have strong ethics, a positive attitude and a willingness to learn. “We need people to keep growing because we’re a growing company,” Wara said. “We have great trainers, “ so if job candidates don’t have vacation ownership sales backgrounds, that’s OK.”

Diamond, she said, is “all about the team environment” and creating cross relationships, so if a guest needs an answer and it’s not an employee’s area of expertise, that employee can still find a way to get that answer for the guest.

“Our company culture is the meaning of ‘yes,’  ” she said. “For our guests, they don’t care what department you work in. We need to work together” to ensure a great experience for the guests.

The company continues to fill vacancies at the property that arise through attrition and normal turnover, he said.

The Marriott Grand Chateau has about 450 villas, but the third phase of development will add another 200-plus villas in a 36-story tower, Kinney said. That will create more jobs, he said.

“We’re in the process of building our third phase, which would require more operations personnel,” he said. That phase is expected to be complete sometime in 2014 .

“We’ll continue to staff on the operations side of things,” he said.

Marriott in general has had “very good success in longevity with fairly low turnover,” Kinney said. “Once people join the Marriott organization, they tend to stay,” he said.

Marriott, he said, has had “very consistent and positive growth,” meeting or exceeding its goals .

“As a market, Las Vegas goes up and down, but we’ve had a tremendous success in that market.” The Grand Chateau property has performed well, Kinney said. “We’re happy with this location. The guest’s experience is great,” he said.

Although the company’s Grand Chateau has room to grow at its current location, Marriott sees no pressing need to add additional properties in Las Vegas, he said. Nevertheless, he said, “We continue to look for other opportunities on an ongoing basis.”

For TLC Liquidators, the recession was the impetus for its business model.

The Las Vegas-based company was created to fill a need created by the large number of vacation ownership units foreclosed upon during the recession,” said Steve Pollaro, director of operations for TLC Liquidators.

“We are a liquidator. In other words, several years ago, when the economy got into trouble, a lot of good hardworking owners lost their jobs or incomes. A lot of the first things to go were the luxury items, and those included vacation units,” he said.

Pollaro explained that once developers sell out a vacation ownership property completely, the homeowners association uses dues from members to operate.

“If their member base all of the sudden drops, they can end up having trouble,” Pollaro said.

That’s where TLC Liquidators comes in. TLC has contracts with major vacation unit homeowner associations across the country to liquidate units that have been foreclosed upon or are otherwise returned to the associations.

“When they get the inventory back, they contract with us to find another owner for the property. All of these properties have been 100 percent paid. (So) we’re able to sell them for a fraction of the cost for someone who originally bought them from a developer,” Pollaro said.

One of the major selling points for vacation unit owners is their access to RCI exchange points that allow people to earn points on their units but then exchange them to stay in other units around the world. Many people seek a vacation ownership unit where they can get the most amount of points for the least amount of money and fees, said Pollaro, who has spent more than 30 years in the vacation ownership industry.

“It allows us to offer a very good product to people that is affordable to them, and they get a good value for what they buy,” he said.

That takes salespeople. “We’re actually looking right now for additional sales agents. We’re an expanding company,” Pollaro said, adding that the Las Vegas-headquartered company has offices not only in Las Vegas, but also Reno, Colorado, Utah and in the Poconos.

“We’re a fast-growing company — there’s a lot of opportunity,” he said. “We provide a good service to the community, and we provide a lot of jobs.”

TLC looks for salespeople with a genuine quality about them, Pollaro said.

“You don’t have to have a time-share background. You just have to have the right attitude and right way about yourself,” he said. “The whole thing is to have the ability to be yourself, be honest, talk to the folks, look them in the eye (and explain the product). We have a product that doesn’t need to be embellished. It’s a great value,” he said.

Often, he said, those interested in TLC’s units are already vacation unit owners. “When they see, for lack of a better term, wholesale, they see the value of it.”

In addition, Pollaro said the business model also enables people who may not have been able to afford vacation ownership in the past to get in on it now

“The nice thing is we get people involved from all walks of life. It makes sense,” he said, adding many people can easily spend $3,000 or $4,000 on a vacation.

“Unless you’re going to go home and burn your suitcases, it doesn’t take much to make it pay for itself,” Pollaro said.