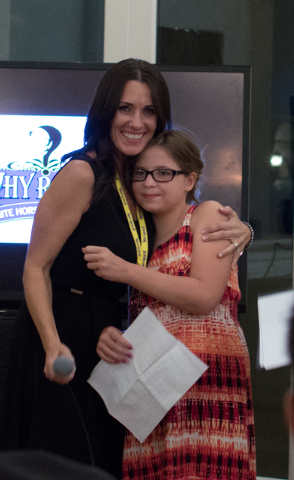 Colleen Drive is a small street but came as a big surprise to its namesake Colleen Brown, who found out about the moniker through a colleague. (Caitlyn Belcher/View)

Few people can say they had a street named for them.

Even fewer can say they had a street named for them without their knowledge.

Brown said she worked for the Clark County Planning Department at the time when a subdivision mapmaker began naming streets across the valley for women in the department.

“Naming streets is not an easy thing, believe it or not,” Brown said. “You have to meet a certain criteria, and it happened to be during a time of a lot of growth. I suppose he just ran out of ideas.”

Brown, 69, said she never noticed the street until a colleague pointed it out.

“I was brand-new from a small town in Minnesota, and I was still learning all the other roads out here,” Brown said. “I didn’t know anything about it. I think it’s kind of cool, really.”

Born in Coon Rapids, Minn., Brown moved to Las Vegas with her parents after high school. She started working for the county in the planning and public works departments.

“I’ve been in Nevada for 50 years,” Brown said. “I went to UNLV and eventually graduated in 1981 with my bachelor’s in business administration.”

After graduation, Brown transferred to work for the city of Henderson until she retired in 1995 as a city clerk.

“I have 31 years of local government experience,” Brown said. “I would like to tell you I planned it that way, but I was just lucky.

“The thing I enjoyed most was providing service for the people. I took great pride in that.”

A few years into retirement, Brown received an offer to serve on the Henderson Libraries Board of Trustees. Mayor Andy Hafen appointed her in 2002.

“Libraries have always been a special interest to me,” Brown said. “My grandmother taught me how to read before I was in school. I later joined the library club at school and volunteered in the library. It became a great passion of mine.”

For 12 years, Brown helped approve budgets and set policies for Henderson libraries. She resigned in April.

“For the last year, I worked with her on the board, and I treasured every moment,” said board member Mark McGinty. “She’s a warm, caring person who’s very passionate about reading, which made it so great to have her on the board.”

McGinty met Brown many years ago working for the city of Henderson.

“She’s a person who gave her life to public service,” McGinty said. “She still continues to do that, even though she retired many years ago. It’s a beautiful thing.”

In September, Brown remarried after being a widow for 13 years. She enjoys scrapbooking, traveling and visiting with her grandchildren.

“I’m more retired now than I have ever been,” Brown said. “I was a very young retiree, so I was volunteering almost full-time. When I got remarried, I decided it was time to cut back a little.”

Brown said she still tells people about the little street named for her.

“I particularly tell family and friends from out of town,” Brown said. “It just blows them away.”