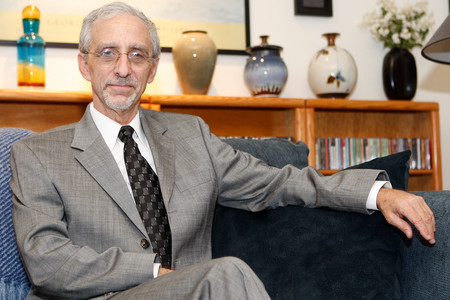 Gary Peck, vociferous leader of the American Civil Liberties Union of Nevada, has left the organization after 13 years as its executive director.

Peck, 58, wouldn’t discuss the specific details of his departure, which came quietly at the end of July. He said only that he “felt it was just time to move on and look for something different to do.”

“The reasons I left are a lot less important than the fact that the whole thing is entirely amicable,” Peck said Thursday.

Peck was largely credited with revitalizing the civil rights group after he took its helm in November 1996. Previously, the floundering organization was known primarily for its efforts to combat police brutality.

Under Peck’s leadership, the ACLU of Nevada fought battles for the homeless, voters, immigrants, women, homosexuals, indigent defendants in the criminal justice system, religious minorities, people of color, and those seeking to engage in free speech.

“This was the period of the strongest growth and development of the Nevada affiliate,” said Richard Siegel, president of the ACLU of Nevada. “Gary came in at a very low point.”

The organization recently prevailed after a 12-year legal battle over advertising and solicitation activities at the Fremont Street Experience. It previously won a similar fight over the distribution of handbills on Strip sidewalks.

In June, Peck joined hundreds of people at the Rio to celebrate the passage of Nevada’s domestic partnership law, which takes effect Oct. 1.

“I certainly feel that I am going out on a high note, given the passage of the historic domestic partnership law last legislative session and the ongoing work of the (Nevada) Supreme Court’s indigent defense commission to reform the state’s indigent defense system,” Peck said.

Peck was the ACLU of Nevada’s only full-time employee when he was hired. He said the group had $20,000 in the bank and “no program to speak of.”

“Today the organization is on very solid financial footing that ensures its long-term sustainability, it has a staff of nine and a dynamic program that is widely respected throughout the state,” Peck said. “I’m exceedingly proud of these accomplishments.”

Siegel, who has been with the ACLU of Nevada since 1967, praised Peck for his abilities to raise money, communicate with the news media and develop issues in the public.

Peck said the organization “attained a high public profile” during his tenure. Indeed, a search of the Review-Journal archives for the past year alone shows 47 articles with the name “Gary Peck” and 104 with the acronym “ACLU.”

It wasn’t unusual for reporters and editors to have voicemail messages from Peck, an early riser, waiting for them when they arrived at work.

And Peck didn’t wait for return calls when he had an issue he wanted brought to light. He called back — again and again.

Peck frequently worked in tandem with Allen Lichtenstein, a private attorney who has contracted with the ACLU of Nevada to operate as its general counsel since 1997.

Lichtenstein described Peck, an avid jogger, “as a dynamo of energy and determination.”

“In the 12 years that I worked with Gary, I found him in a sense inspirational, because while I might get tired or depressed about having to fight the same fight over and over again, Gary with his energy and determination was always able to remain focused on the job we had to do,” Lichtenstein said. “So I feel that I was privileged to be able to work with him for all of these years.”

Without Peck’s efforts, Lichtenstein said, Nevadans would have “far fewer rights here — on the streets, sidewalks and elsewhere.”

Lichtenstein acknowledged that his longtime friend sometimes ruffled feathers by going against majority opinion but said that’s a sign he did his job well, “because the Bill of Rights was specifically designed to protect unpopular rights.”

Sheriff Doug Gillespie said Peck is on the Metropolitan Police Department’s multicultural advisory committee, and he appreciates the different perspective Peck brings to the table.

“I won’t even try to make you think we always agreed, but I think there was a mutual level of respect,” Gillespie said.

He described Peck as professional and “committed to his beliefs.”

“At times I wish he wasn’t so quick to go to the media in some situations,” the sheriff added.

District Attorney David Roger said he often found himself on the opposite side of issues with Peck. “However, I always found him to be a fierce advocate for his cause and always a gentleman.”

Siegel said Peck made the decision to leave his job.

“We were told by Gary that he had decided to look for other opportunities,” Siegel said.

The board president said Peck had gone through years of “extraordinary stress” with the organization and “had taken on ever-increasing levels of responsibility.”

Siegel said the board of directors will meet within the next week to decide whether to name an interim director. He said a national search for the permanent director, who will earn an annual salary in the range of $70,000 to $90,000, already has begun.

Peck said he looks forward to spending some quality time with his 4-year-old daughter, who often was by his side while he worked. Last year the pair traveled together to Washington, D.C., for President Barack Obama’s inauguration.

“I’m going to take a little bit of time to clear my head and decide what next to do,” said Peck, who lives in Las Vegas. “Whatever I do, I certainly will explore every opportunity to remain here and work to improve the quality of life in Nevada.”

Peck has a doctorate in sociology from the University of North Carolina at Chapel Hill. He also has a law degree from Stanford University in Palo Alto, Calif., although he has never practiced law. He clerked for a federal judge in California, and he was working in a public policy and law program at Georgetown Law School in Washington, D.C., before going to work for the ACLU of Nevada.

“Throughout my tenure as director, I always tried to comport myself with integrity and always tried to be principled,” Peck said. “And I certainly never personalized differences regarding policies and laws that I felt implicated civil liberties. In fact, I typically held those with whom I disagreed about such matters in high regard and never questioned their motives or their belief that they were doing the right thing.”