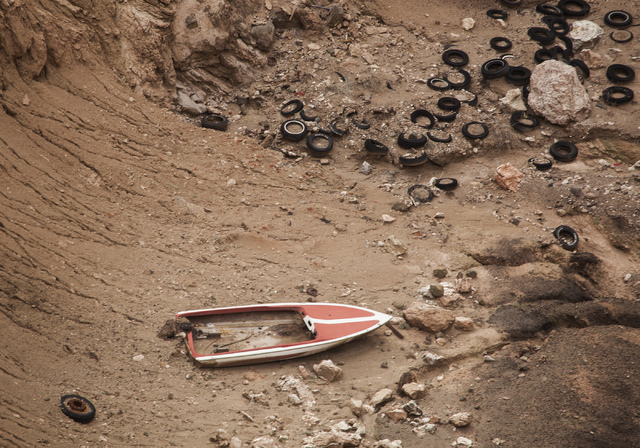 Garbage dumped in the Three Kids Mine as seen Thursday, Jan. 23, 2014. The 1,259-acre site is an abandoned manganese mine and mill site on Lake Mead Parkway, across from Lake Las Vegas. (Jeff Scheid/Las Vegas Review-Journal) 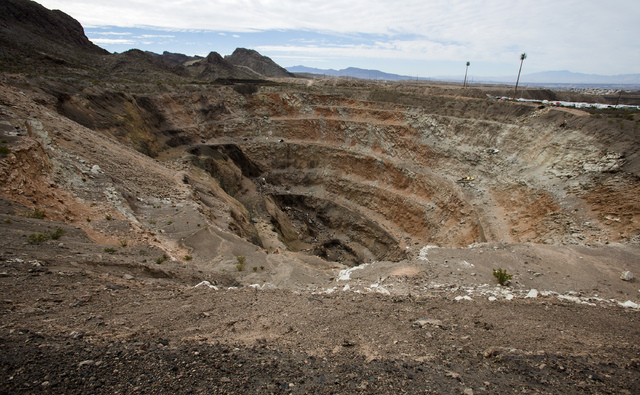 The Three Kids Mine as seen Thursday, Jan. 23, 2014. The 1,259-acre site is an abandoned manganese mine and mill site on Lake Mead Parkway, across from Lake Las Vegas. (Jeff Scheid/Las Vegas Review-Journal) 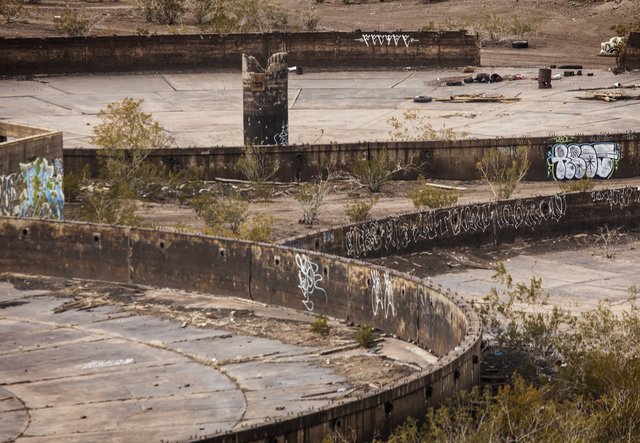 The Theee Kids Mine as seen Thursday, Jan. 23, 2014. The 1,259-acre site is an abandoned manganese mine and mill site on Lake Mead Parkway, across from Lake Las Vegas. (Jeff Scheid/Las Vegas Review-Journal) 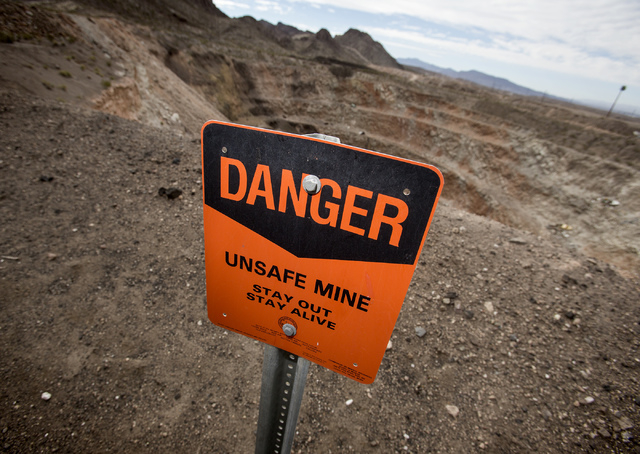 The Three Kids Mine as seen Thursday, Jan. 23, 2014. The 1,259-acre site is an abandoned manganese mine and mill site on Lake Mead Parkway, across from Lake Las Vegas. (Jeff Scheid/Las Vegas Review-Journal)

WASHINGTON — More than a thousand acres of Southern Nevada land scarred by mining was given a future Wednesday, when Congress cleared the way for a major cleanup and redevelopment of the long-abandoned site in Henderson.

The Senate gave final approval to the transfer of over 948 acres of federal land to the city of Henderson Redevelopment Agency. The property off Lake Mead Parkway across from the entrance to Lake Las Vegas is the former site of the Three Kids Mine and mill site, a manganese operation that bloomed at the end of World War I and was used by the government to store ore until a decade ago.

Today the site is poisoned by lead, diesel fuel and arsenic in mounds and deep slurry ponds along the parkway. It also harbors three massive pits, each hundreds of feet deep and littered with mining debris and trash that has accumulated over the past four decades, as trespassers used the property for an illegal dump site, shooting range and off-road racetrack.

The federal property and another parcel of 314 acres of private land have been designated as a redevelopment area called Lakemoor Canyon, with the city partnering with a developer to clean and prep the site for homes and businesses using a mix of bond money and private investment.

The plan is to fill in the pits, clean up the contamination and eventually build at least 6,000 homes on a portion of the property, said Bob Unger, a master-plan developer who represents private land owners inside the redevelopment area.

“It’s going to be completely safe. I’d want to move out here,” he said during a tour of the site early this year.

“The standards we’re going to clean up to are residential standards,” added Mindy Unger-Wadkins, Unger’s sister and partner in the redevelopment effort. “It’s literally the kid in the backyard eating the dirt.”

Unger said his investment group has already sunk roughly seven years and $15 million into the site. It is expected to cost at least $300 million and take up to four years to get the land ready for homes and businesses.

Though getting Congress to transfer the property has been a long and difficult process, Unger said, it also may have been a blessing in disguise. It saved the development from getting caught up in the collapse of the housing market.

“There’s a reason for delays sometimes,” he said.

Rep. Joe Heck, R-Nev., introduced the legislation, and the House passed it almost a year ago. President Barack Obama is expected to sign the measure into law, probably before the end of the month.

In a statement on passage of the bill, Sen. Harry Reid, D-Nev., called the old mine “a danger and an eyesore to the nearby residents” for more than 50 years.

As an added bonus, said Sen. Dean Heller, R-Nev., the measure will “help bring jobs to the Henderson area and encourage economic development in a region that needs it badly.”

“We want the site cleaned up,” said Leo Drozdoff, director of the Nevada Department of Conservation and Natural Resources. “There’s no question in my mind that with this arrangement the site will get cleaned up a lot more quickly than it would have.”

First state regulators need to evaluate the property and work with the developer and the city on a remediation plan, a process that could take about two years. Then state officials will monitor the site during and after the cleanup, Drozdoff said.

Even with the blessing of Congress, Lakemoor Canyon is far from a sure thing. By some estimates, cleaning up the mine could wind up costing as much as $1.5 billion, a figure that Unger said probably would sink the project.

Unger-Wadkins said the pond’s contents are about 60 percent liquid, “like Play-Doh.” To get rid of it “you’ve either got to liquefy it or dry it out.”

Unger has some experience with this sort of industrial-to-residential transformation. He previously led the effort to convert an old gravel pit in northeast Henderson into the Tuscany neighborhood, also with city redevelopment help.

But he readily admits that this is a far bigger undertaking.

“Believe me, I wake up every morning and wonder how crazy I am,” Unger said.