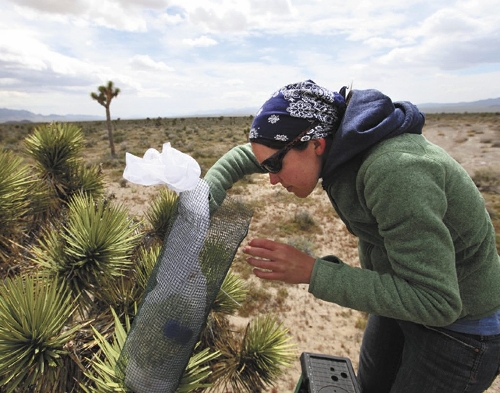 TICKABOO VALLEY — It is the iconic plant of the Mojave Desert, its name immortalized with a national park and a U2 album.

But there would be no Joshua trees at all without an easily overlooked moth about the length of a pencil eraser.

None other than Charles Darwin himself called the relationship between the yucca moth and the Joshua tree "the most remarkable fertilization system ever described."

It is so unusual that a team of researchers has spent almost a month camped in the desert 140 miles north of Las Vegas trying to learn more about this evolutionary dance.

"It is pretty mind-boggling to imagine how this arose," said Dr. Chris Smith, the evolutionary biologist heading up the field research. "It’s very strange, and the fact that it is as strange as it is has made a lot of biologists interested."

Each spring, yucca moths emerge from the ground to mate and lay eggs in the flowers of Joshua trees in Nevada, California and Arizona.

But unlike bees and other insects that inadvertently spread pollen from flower to flower as they flit around gathering nectar, these moths deliberately pollinate Joshua trees so they will produce the seeds that eventually will feed their caterpillars when they hatch.

MADE FOR EACH OTHER

The specialization does not stop there, either. Since 2003, researchers have discovered that what they thought was one moth is actually two distinct species, each specially adapted to pollinate one of two subtly different varieties of Joshua tree.

As Smith wrote in 2009, it is "almost as if the moth and the tree were made for each other."

It’s what he calls a "textbook example of co-evolution," the process by which two or more species mutually adapt to one another.

And Smith means that literally. In evolutionary biology textbooks, the section on co-evolution often features a picture of the Joshua tree and the yucca moth.

"The current best estimate" is that the unusual relationship between yuccas and yucca moths has been around for about 30 million years, said Smith, who is an assistant professor of biology at Willamette University in Salem, Ore.

The Joshua tree is thought to have emerged as a distinct variety of yucca about 5 million years ago. Sometime since then, the species split.

The western Joshua trees of California and central Nevada are generally taller with longer trunks, longer leaves and fewer branches than the eastern variety that grows mostly in Arizona and Southern Nevada.

As far as researchers know, Tickaboo Valley, just east of the Lincoln County town of Rachel, is the only place where the two varieties live side-by-side.

Smith has been going there for the past eight years.

Each morning, he and his team fan out across the desert, collecting moths and depositing them in the flowers of select trees along state Route 375, better known as the Extraterrestrial Highway.

They have set up 73 test sites by wrapping wire cages around the flower clusters of trees scattered over about 4 square miles of federal land.

"One of the big problems we have is with animals coming and eating our cages. Cows, for one," Smith says.

Inside each wire cage, a handful of male and female moths are released onto blossoms that have been wrapped in a fine white mesh more commonly used in wedding veils.

"We buy it from a bridal supply company," Smith said. "It’s sort of a nuptial event I guess. Hopefully, though, all of our moths are already pregnant."

Smith’s older brother, Rick, who serves as camp cook for the research team, puts it another way: "You wouldn’t give it a second look."

The moths are grayish black in color with a wingspan roughly the diameter of a triple-A battery. They look like a common clothes moth or a tiny cockroach, depending on who you ask.

The females can be identified by the yellow blob of pollen they grip using a pair of tentacles that are unlike anything else in the insect world.

Smith said the moths use the tentacles to collect pollen, carry it with them and push it down into the female parts of the Joshua tree flower.

They lay their eggs using an organ called an ovipositor, which comes out of their tails like a retractable blade to cut a hole in the flower.

Smith’s current work, funded in part by the National Science Foundation, is aimed at explaining what happens to the insects and the plants when one type of moth lays its eggs in a flower usually pollinated by the other species.

The results so far show that eggs laid in the "wrong" flowers produce fewer cater­pillars, but Smith hopes to determine whether the plants also pay a price when pollinated by the wrong species of moth.

Smith also has been sending live moths and floral scent samples to a colleague in Sweden who uses high-tech equipment to identify the component parts of the smell given off by the flowers.

The researcher then tests the moths’ reaction to each substance using tiny electrodes implanted in the insects’ brains.

Ultimately, Smith is hoping to shed new light on a century-old idea, first posed by Darwin, that co-evolution might be responsible for the enormous diversity among plants and insects. That perhaps the moths are the reason one type of Joshua tree has now become two.

Smith and his team of five research assistants set up camp in the Nevada desert on March 24. They are set to conclude their field work on Thursday.

Smith plans to return in late May to gather up the cages and collect the Joshua tree fruit inside.

Then it’s back to the lab to count seeds and caterpillars.