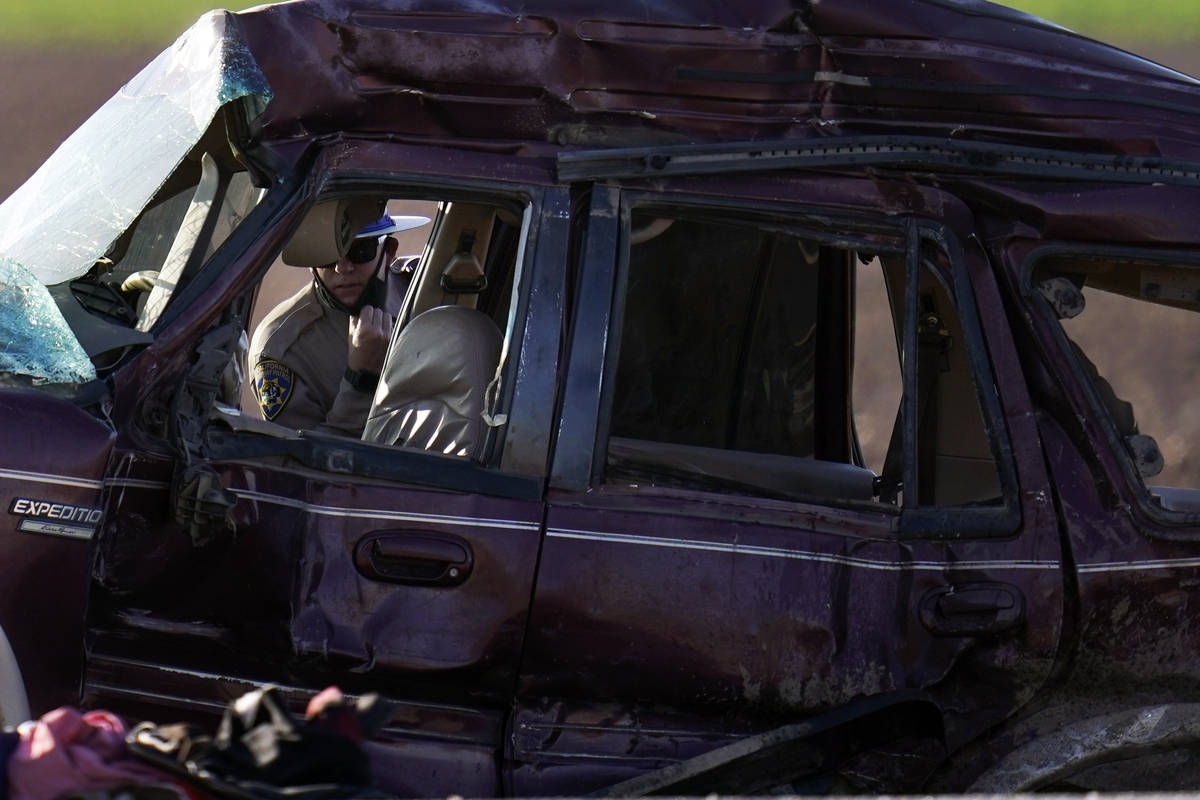 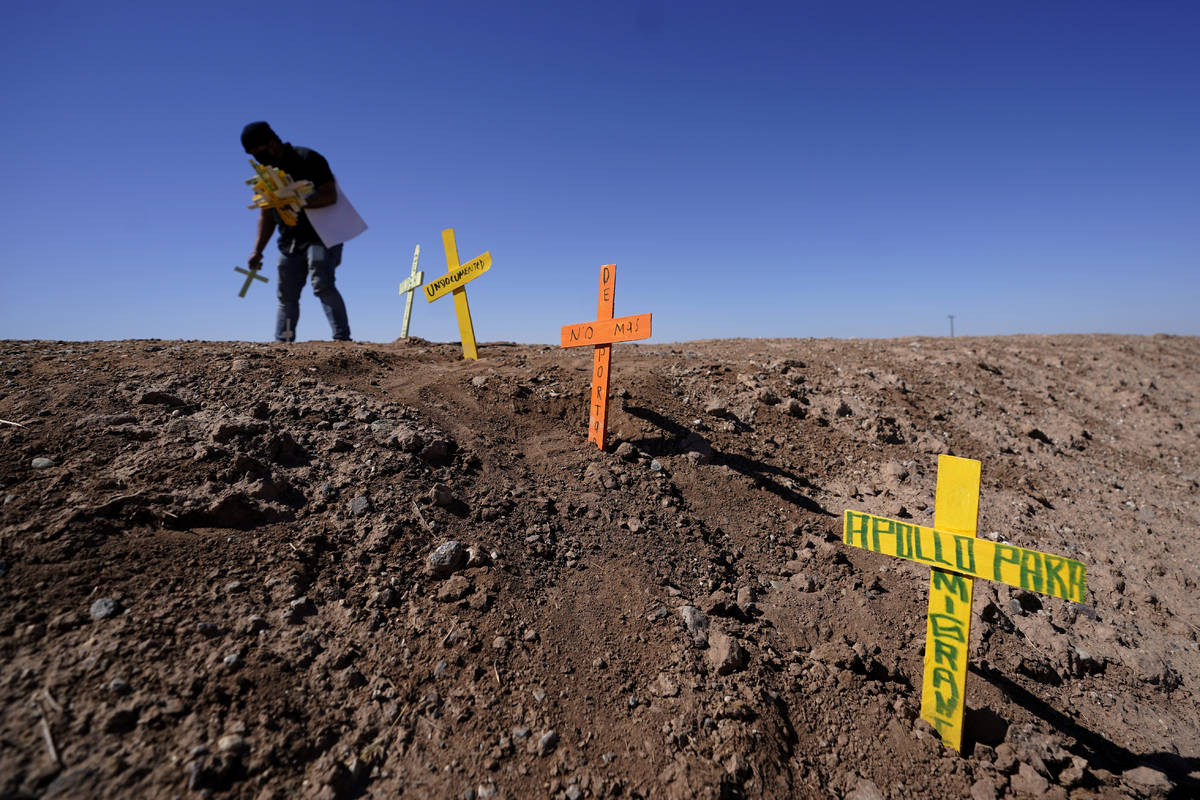 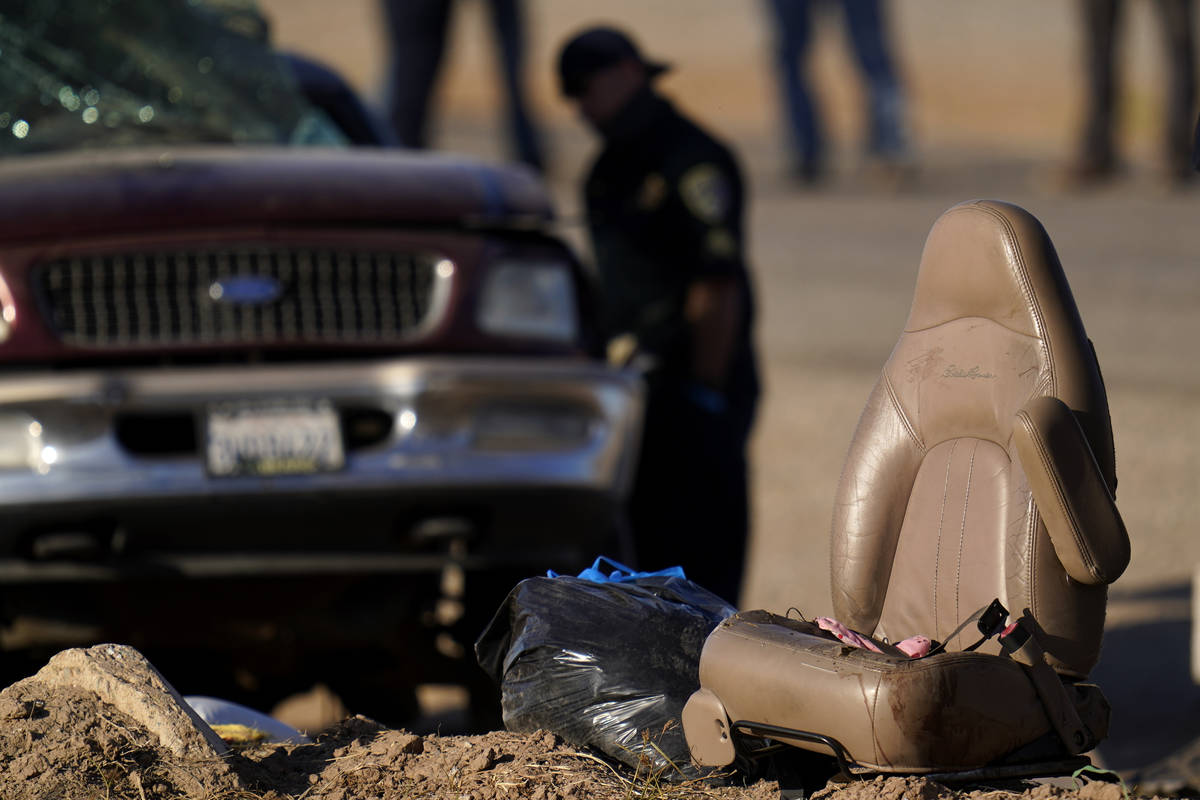 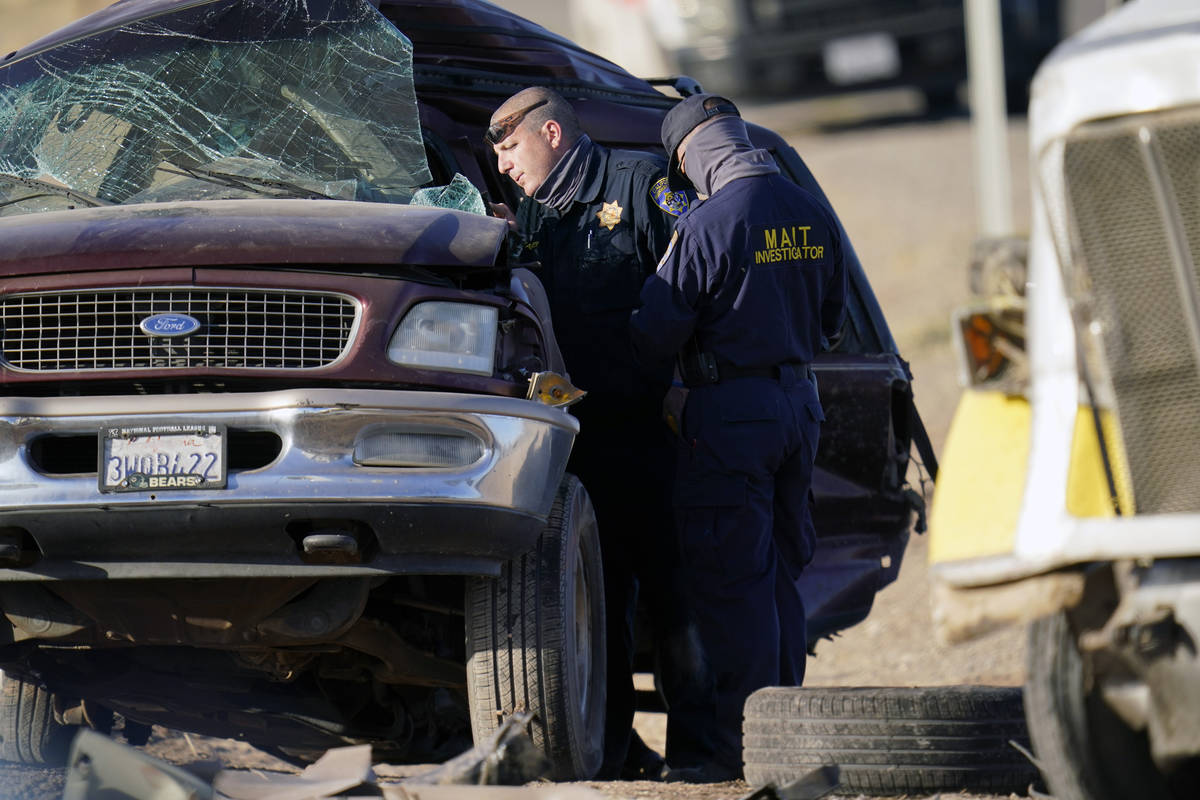 Law enforcement officers sort evidence and debris at the scene of a deadly crash in Holtville, Calif., on Tuesday, March 2, 2021. Authorities say a semi-truck crashed into an SUV carrying 25 people on a Southern California highway, killing at least 13 people. (AP Photo/Gregory Bull) 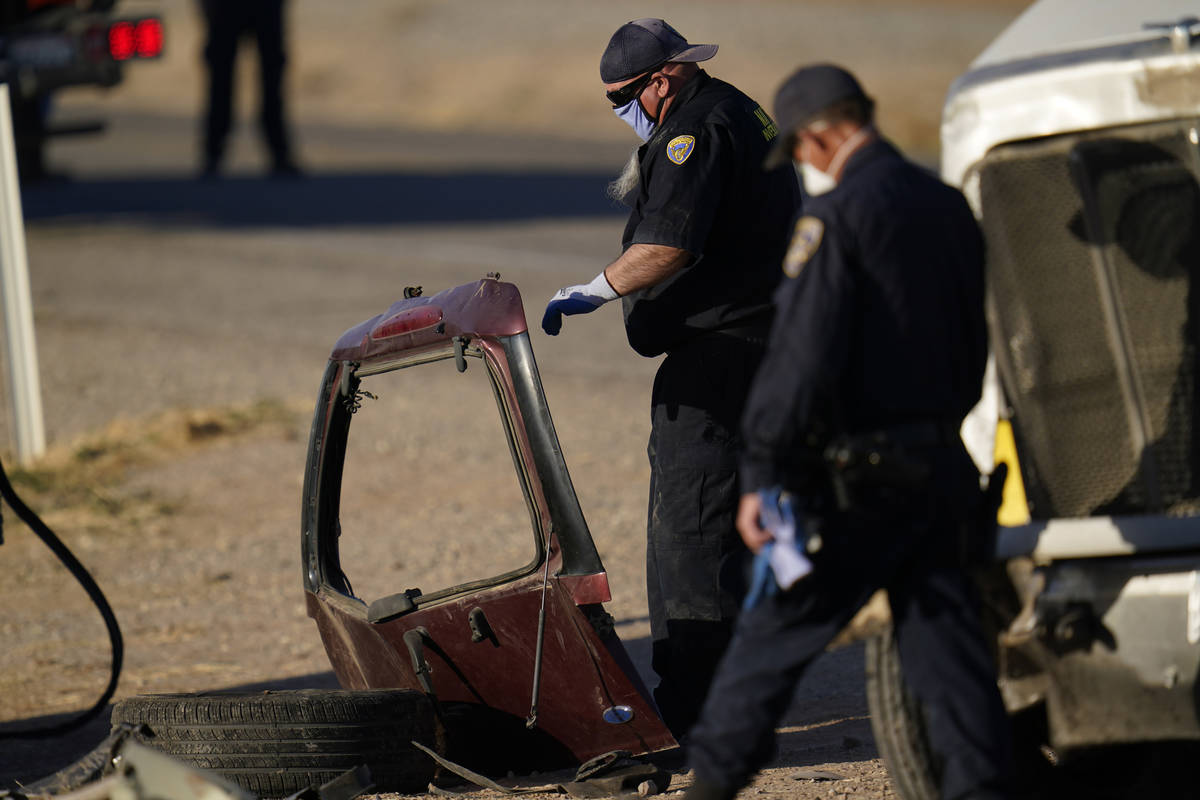 Law enforcement officers sort evidence and debris at the scene of a deadly crash in Holtville, Calif., on Tuesday, March 2, 2021. Authorities say a semi-truck crashed into an SUV carrying 25 people on a Southern California highway, killing at least 13 people. (AP Photo/Gregory Bull)

HOLTVILLE, Calif. — Thirteen people killed in one of the deadliest border crashes on record were among 44 people who entered the U.S. through a hole cut into Southern California’s border fence with Mexico, the Border Patrol said Wednesday.

The Suburban carried 19 people, and it caught fire after entering the U.S. All escaped the vehicle and were taken into custody by Border Patrol agents.

The Expedition crammed with 25 people continued on, and a tractor-trailer struck it a short time later. Ten of the 13 killed have been identified as Mexican citizens. The rest of those in the SUV and the truck driver survived.

The Border Patrol said its agents were not pursuing the vehicle before the crash.

The opening in the fence was about 30 miles (48 kilometers) east of the crash in the heart of California’s Imperial Valley, a major farming region.

It was made of steel bollards that were built before former President Donald Trump blanketed much of the border with taller barriers that go deeper into the ground.

“Human smugglers have proven time and again they have little regard for human life,” Bovino said. “Those who may be contemplating crossing the border illegally should pause to think of the dangers that all too often end in tragedy, tragedies our Border Patrol Agents and first responders are unfortunately very familiar with.”

Seats in the Expedition had been removed except for those for the driver and front passenger, said Omar Watson, chief of the California Highway Patrol’s border division.

The cause of Tuesday’s collision wasn’t yet known, authorities said. The SUV is built to hold eight people safely, but smugglers are known to pack people into vehicles in extremely unsafe conditions to maximize their profits.

The crash happened during the height of the harvest in the agricultural region that provides much of the lettuce, onions, broccoli and winter vegetables to U.S. supermarkets. The community of Holtville where the crash occurred is a no-stoplight town with a gazebo in its large central square and calls itself the world’s carrot capital.

The area became a major route for illegal border crossings in the late 1990s after heightened enforcement in San Diego pushed migrants to more remote areas. Many crossed the All-American Canal, an aqueduct that runs along the border and unleashes Colorado River water to farms through a vast network of canals.

Barely a mile from the crash, there is a cemetery with rows of unmarked bricks that is a burial ground for migrants who died crossing the border.

“I was trying to figure out how to stop the deaths,” said Hunter, whose brother Duncan strongly advocated for border wall construction as a congressman.

Illegal crossings in the area fell sharply in the mid-2000s but the area has remained a draw for migrants and was a priority for wall construction under former President Donald Trump. His administration’s first wall project was in Calexico.

When police arrived at the crash site about 125 miles (200 kilometers) east of San Diego, some passengers were trying to crawl out of the crumpled SUV. Others were wandering around the nearby fields. The big rig’s front end was pushed into the SUV’s left side and two empty trailers were jackknifed behind it.

“It was a pretty chaotic scene,” Watson said.

Passengers in the SUV ranged in age from 15 to 53 and were a mix of men and women, officials said. The driver was from Mexicali, Mexico, just across the border, and was among those killed. The 68-year-old driver of the big rig, who is from the nearby California community of El Centro, was hospitalized with moderate injuries.

The passengers’ injuries ranged from minor to severe and included fractures and head trauma. They were being cared for at several hospitals. One person was treated and released.

The crash occurred around 6:15 a.m. under a clear, sunny sky at an intersection just outside Holtville, about 11 miles (18 kilometers) north of the border. Authorities said the tractor-trailer was heading north on a highway when the SUV pulled in front of it from a road with a stop sign.

A California Highway Patrol report said the SUV entered an intersection directly in front of the big rig, which hit the left side of the SUV. Both vehicles came to a halt on a dirt shoulder.

It’s not clear if the SUV ran a stop sign or had stopped before entering the highway. Speeds also weren’t yet known.

The speed limit for tractor-trailers on the highway is 55 mph (89 kph), according to California Highway Patrol Officer Jake Sanchez. The other road also has a 55 mph speed limit.

A 1997 Ford Expedition can carry a maximum payload of 2,000 pounds. If it had 25 people inside, that would easily exceed the payload limit, taxing the brakes and making it tougher to steer the vehicle, said Frank Borris, former head of the National Highway Traffic Safety Administration’s Office of Defects Investigation.

SUVs of that age tended to be top-heavy even when not carrying a lot of weight, Borris said.

“With all of that payload above the vehicle’s center of gravity, it’s going to make it even more unstable,” he said.