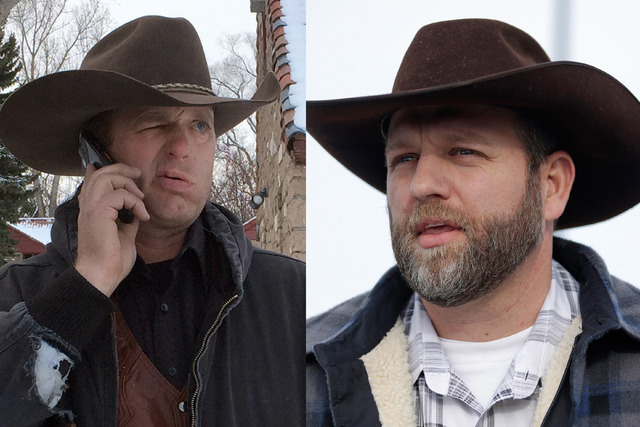 This is a combo of file photos showing the Bundy family from left to right, Ryan Bundy and Ammon Bundy. (File/AP)

PORTLAND, Ore. — A federal judge has rejected Ammon and Ryan Bundy’s request for a trial delay.

The Bundys and more than a dozen other defendants are scheduled for trial in September on charges stemming from the January takeover of the Malheur National Wildlife Refuge.

Marcus Mumford, who replaced Mike Arnold as Ammon Bundy’s lawyer in May, seeks both the delay and his client’s pretrial release, contending he and Bundy have been unable to watch hours of video evidence with his client still jailed.

The Oregonian/OregonLive reports that Bundy was recently moved from the jail in downtown Portland to one on the outskirts of the city.

U.S. District Court Judge Anna Brown said Wednesday she couldn’t approve a delay without a showing that the Bundys, who initially insisted on a trial starting in April, couldn’t prepare for trial by Sept. 7.

She said the brothers have repeatedly proclaimed their innocence and outlined their defense for occupying the bird sanctuary. The defendants have said they asserted their First Amendment rights to protest the federal control of Western lands and demonstrate against the prison sentences of two Oregon ranchers while using their Second Amendment right to carry firearms in self-defense.

In arguing against a delay, Assistant U.S. Attorney Craig Gabriel said the September date allows the Bundys to have a fair and speedy trial in Oregon and time to prepare for a February trial on charges stemming from a standoff at their father’s Nevada ranch.

In the Oregon case, the Bundys are among 26 defendants indicted on charges of conspiring to prevent Interior Department workers from doing their jobs at the refuge. The brothers also face a weapons charge.

Six of the 26 defendants have pleaded guilty; three others earlier waived their right to a speedy trial.