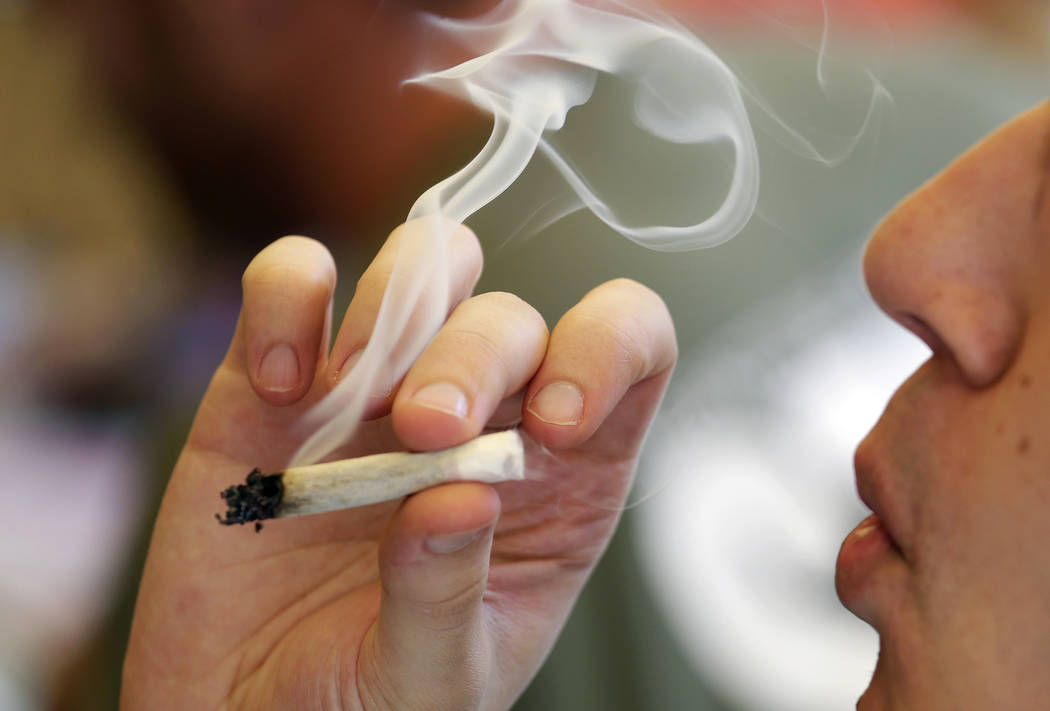 FILE - In this April 20, 2016, file photo, a man smokes a marijuana joint at a party celebrating weed in Seattle. A new federally funded study found, not surprisingly, that marijuana use in Washington state is up since pot became legal in 2014. The hard, or not-so-hard, evidence was in sewage samples. (AP Photo/Elaine Thompson, File) 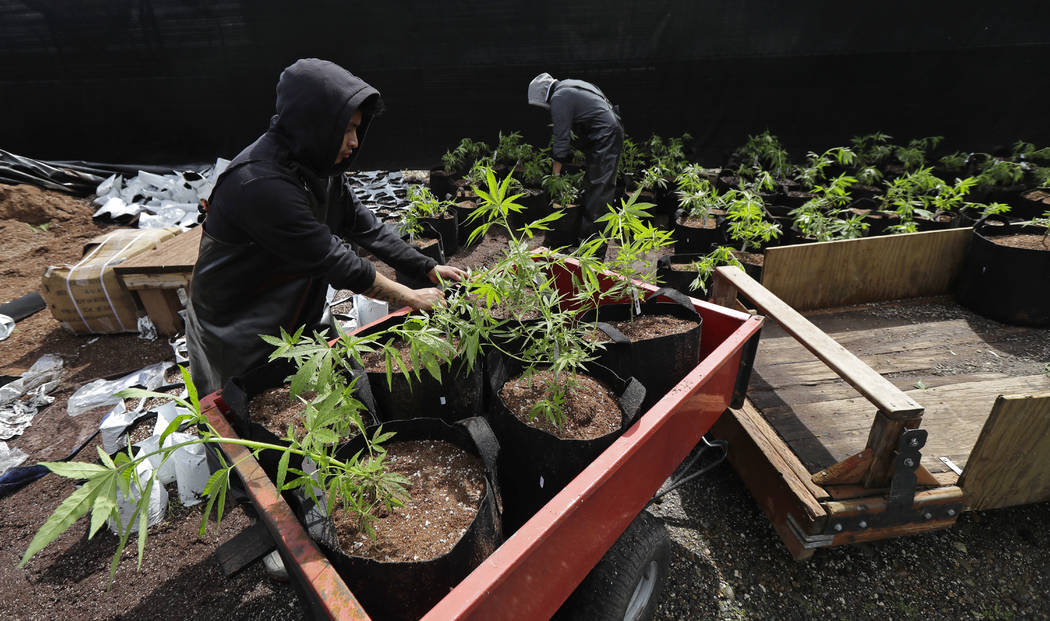 FILE - In this April 12, 2018, photo, Alex Martin, left, and Macrio Ahlon, right, load transplanted marijuana plants into a trailer near Shelton, Wash. A new federally funded study found, not surprisingly, that marijuana use in Washington state is up since pot became legal in 2014. The hard, or not-so-hard, evidence was in sewage samples. (AP Photo/Ted S. Warren) 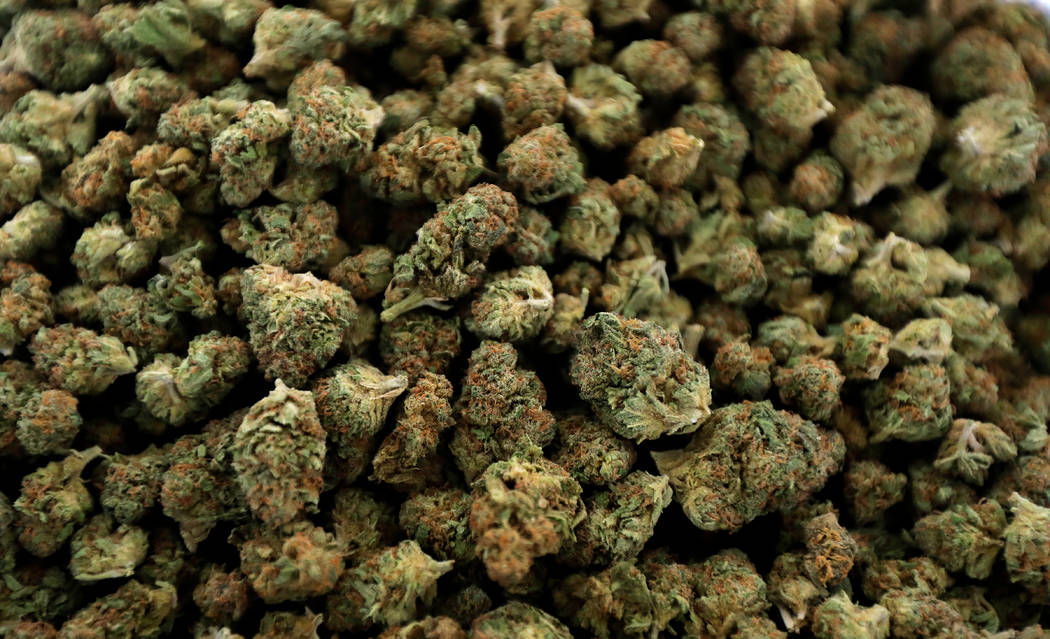 FILE - In this April 12, 2018, file photo, nugs of marijuana await packaging near Shelton, Wash. A new federally funded study found, not surprisingly, that marijuana use in Washington state is up since pot became legal in 2014. The hard, or not-so-hard, evidence was in sewage samples. (AP Photo/Ted S. Warren, File)

SEATTLE — The proof is in the pee.

A federally funded study has confirmed, not surprisingly, that marijuana use went up in Washington state after its first legal pot stores opened in 2014. In fact, consumption appeared to double, at least in one major city, over three years — a conclusion scientists reached by way of the unglamorous work of analyzing raw sewage.

The research entailed driving to two sewage treatment plants that serve the 200,000 people of Tacoma, a city whose drug-use trends tend to mirror those of Seattle. The scientists would pick up a cooler full of frozen wastewater samples, thaw them and analyze them using liquid chromatography and mass spectrometry.

They were looking for THC-COOH, a substance produced when the body metabolizes THC, the main ingredient in marijuana that gets you high. THC-COOH is excreted mostly in people’s urine.

The researchers said they can’t tell whether the increase in metabolites means more people are using weed or the same old users are consuming more of it. Another possible explanation is that the marijuana, edible treats and extracts sold legally in stores are more potent than what was commonly available on the black market.

One of the authors, Caleb Banta-Green of the University of Washington’s Alcohol and Drug Abuse Institute, said his best guess is that much of the increase can be attributed to that last possibility.

The pot available nowadays? “It’s not your grandmother’s marijuana,” he said.

Wastewater sampling has been used for years in Europe and Australia to examine drug usage trends but is fairly unusual in the U.S. The National Institute on Drug Abuse provided $120,000 for the three-year study.

Another important conclusion from the study, published this week in the journal Addiction, is that it appears a large number of users of black-market pot quickly switched over to the legal stuff. Metabolite levels in wastewater have not gone up as much as would be expected from the huge increase in legal sales, Burgard said.

The findings are in line with other, less disgusting indicators: Washington’s retail cannabis sales amount to more than $1.3 billion a year. And a 2016 state Health Department survey found that 14 percent of adults over 21 reported using marijuana in the previous month, up from 11 percent before voters decided to legalize weed in 2012.

The researchers hoped to use their findings to estimate the size of the remaining black market. They wanted to do that by comparing metabolite levels in the sewage to sales figures for the legal market.

But they’re not able to conduct such an analysis yet, because they have not yet established how much THC-COOH people can be expected to excrete based on their THC intake.

Beau Kilmer, a RAND drug policy researcher who was not involved in the study, said he was excited to see wastewater analysis being used in the U.S. to gain a picture of drug usage. For one thing, Kilmer said, surveys can be inaccurate because people asked about their drug use don’t always tell the truth.

“This study helps fill an important research gap,” Kilmer said in an email.