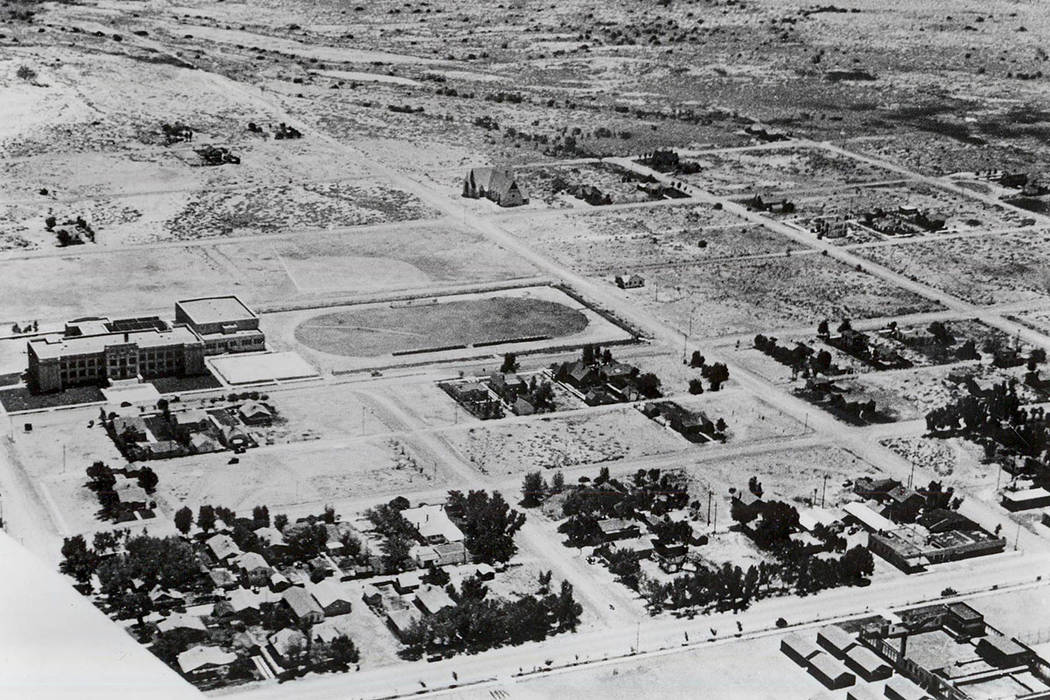 Alumni of the old Las Vegas High School worry that its historic buildings will be torn down or fall down from benign neglect.

Historical preservationist Bob Stoldal is extremely upset because there has been no public input.

The former television newsman is a 1958 graduate of what is now called the Las Vegas Academy of the Arts, a Clark County School District magnet high school for performing, visual and liberal arts.

The downtown school, bordered by Seventh and Ninth streets and Bridger and Clark avenues, opened in 1930 and represents “the beginning of organized professional education” in Las Vegas, Stoldal said. The thought of it being demolished enrages him.

“A few of us are going to chain ourselves to the door,” he vowed.

Former Nevada Gov. and U.S. Sen. Richard Bryan, one of the school’s many notable graduates, said alumni will try to find out how much it would cost to restore at least the main building.

“Nobody wants to tear it down,” Bryan said. “But what happens if there’s no money to rehabilitate it?”

In a written statement, the Clark County School District said a technology upgrade was planned for the high school using money from the 2015 school bond extension, but it would have required highly intrusive trenching throughout the campus and the installation of conduit and electrical components throughout the old buildings.

Instead, the school district decided to proceed with a broader master plan for a phased replacement of the buildings.

The main building and the old gym are not exactly in pristine condition. Classes are hot in the summer and cold in the winter, and when it rains, there are leaks. The school district is notorious for failing to maintain crumbling schools.

The district said it intends to preserve the campus’s historic elements while modernizing and expanding the facilities.

The school district is reaching out to see whether the architectural community is interested in a master-plan design competition for the entire campus.

I was told by the school district that no additional information was available. No cost estimates. No plans. No idea what might be preserved or demolished.

About six weeks ago, a school district official met with the Las Vegas High School Alumni Association to explain there would be a long-term program for the campus. But Stoldal, a local leader in historic preservation, is furious that there was no public notification or news release about what might happen to the historic high school buildings, noted for their art deco designs.

Money is always the challenge for historic preservation of buildings that prompt fond memories. The “Save the Huntridge” campaign has been a failure. Yet the Mob Museum, the Fifth Street School and the Westside School have been successes — with the help of tax dollars.

Bryan and Stoldal don’t object to an alternative use, citing the old federal courthouse downtown, built in 1933, which was restored for $42 million and repurposed to house the Mob Museum. The Historic Fifth Street School, built in 1936, underwent a $9.6 million rehabilitation, reopening in 2008 to house cultural offices.

The latest renovation, the Historic Westside School, built in 1923, opened in August after a $12.5 million restoration. The first Las Vegas school to allow black students in the 1940s, it now houses KCEP radio and a technology nonprofit.

Now that the word is out that the Las Vegas Academy buildings are endangered, we’ll see how much it costs and who steps up to the plate.

Hopefully, fond memories of Las Vegas High School will prompt alumni to open their wallets or find other revenue sources, and architecture firms will find merit in competing to create a master plan that preserves — but doesn’t demolish — the historic buildings.