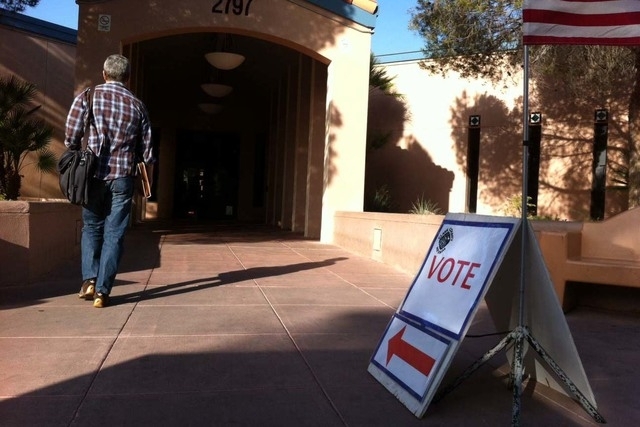 A sign directs voters to the polling place at the Green Valley Library in Henderson on Tuesday, April 7, 2015. (Michael Quine/Las Vegas Review-Journal)

Legislators in 2015 made a major change in how judges, regents and other nonpartisan candidates in county and statewide races are elected. As a result, many of this year’s nonpartisan races will be decided by fewer voters.

Previously, in county and statewide nonpartisan primaries with at least three candidates, the top two finishers advanced to the November ballot regardless of what percentage of the vote they received. Starting with this year’s June 14 primary, the elections will function much like Southern Nevada’s off-year municipal primaries. In those primary contests, a candidate can win election outright and avoid a runoff, regardless of how many candidates are in the race, if a person receives a majority of the votes cast.

Beyond judges and regents, members of the State Board of Education, county school board trustees, sheriffs and public hospital trustees also are affected.

In odd-numbered years, the municipal elections in Las Vegas, North Las Vegas, Henderson and Boulder City already allow candidates who win more than 50 percent of the votes in primaries to be declared winners. As a result, there often is no need for a June general municipal election because all the races were settled.

In nonpartisan elections in even-numbered years, that didn’t happen. Even if one candidate got 70 percent of the vote and two others split the remaining 30 percent, the top two advanced.

The advantage is that fewer races will be on the general election ballot, saving election officials money.

The disadvantage, as explained during a committee hearing by Assemblyman James Ohrenschall, D-Las Vegas, is that “the winner-take-all scenario is going to benefit incumbents, those with access to a lot of campaign funds, and those who have a well-known last name.” Those candidates will be able to close the deal in June and avoid fundraising and campaigning alongside partisan candidates into November.

Ohrenschall was one of 11 Assembly members who voted against the change. All 21 senators voted for Senate Bill 5, sponsored by Sen. James Settelmeyer, R-Minden.

Ohrenschall’s other point was that primary turnout out is so pitiful — 20 percent in the 2014 election statewide versus nearly 46 percent in the general — that voters who sit out the primary won’t be able to vote in some nonpartisan races.

Let’s look at this year’s judicial races to figure out how this will work.

No one filed against Nevada Supreme Court Justices James Hardesty or Ron Parraguirre, or Appeals Judges Michael Gibbons and Abbi Silver. Their names will appear on November’s ballots, and they’ll win election after just one vote is cast for each of them. No change there.

Appeals Judge Jerome Tao drew just one opponent, so they advance straight to November’s ballot. Nonpartisan races with only two candidates have no primary. No change there.

In the race for District Court, Department 20, Judge Eric Johnson faces three challengers, which creates the need for a primary vote. Previously, he would have focused on a top-two finish and advancing to a November runoff. But this year, if Johnson pushes hard, he might win in the primary, although getting a majority of votes cast in a four-way race makes that less likely.

But in a field of three, such as the Las Vegas Justice of the Peace Department 3 race, where incumbent Janiece Marshall faces attorneys Sean Connell and Harmony Letizia, there’s a chance one might win outright under the 50 percent rule.

Campaign consultants say it changes the pace of the campaigns, pushing candidates to start earlier.

Voters can expect to see fliers, TV ads and receive more candidate robocalls before the primary. And since the majority of people are indulging in early voting, they’re likely to be deluged before early voting begins.

As a result, contributors, mostly attorneys, will be hit up early and often for money, to their dismay. Then they’ll be hit up again for the fall elections.

Clark County Registrar of Voters Joe Gloria said it is one of the biggest changes in the way elections are handled since lawmakers decided some years ago that the majority of judges should all be on the same election cycle.

Remember, candidates for the Board of Regents, school boards and other nonpartisan offices will be doing the same thing as the judicial candidates.

Here’s my prediction: In some nonpartisan races, never-gonna-win candidates may be recruited as third candidates so incumbents can win outright in June rather than face larger numbers of voters in November.

Before this, candidates with more money than sense often filed just to see their names on the ballot. It must give them some sense of importance. They file. They don’t campaign. They don’t go to candidate interviews. Now they can be shills and serve a campaign strategy by helping someone else get elected faster.

Result: Fewer people will be choosing judges, which I believe are among the most important races on the ballot.

— Jane Ann Morrison’s column runs Thursdays. Leave messages for her at 702-383-0275 or email jmorrison@reviewjournal.com. Find her on Twitter: @janeannmorrison