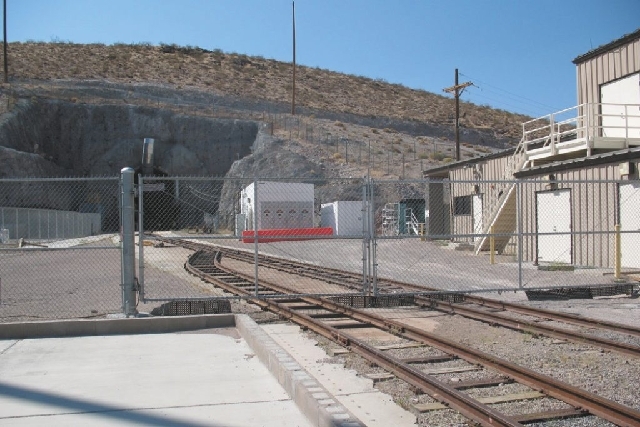 A fence surrounds the north entrance to the five-mile tunnel that loops through Yucca Mountain, 100 miles northwest of Las Vegas. A federal court on Tuesday ordered the Nuclear Regulatory Commission to restart the licensing process for the nuclear waste project.

I’ve lost track of the number of times that storing high-level nuclear waste at Yucca Mountain has been declared dead, only to climb up from the grave like Hollywood villain Freddy Krueger.

In 2011, it truly seemed dead with scant hope of revival. The fight seemed at an end. Opponents even threw a wake.

Then last week, GOP senators threatened Democratic leader Harry Reid that if he changed the Senate’s filibuster rules, they would find 51 senators willing to shove Yucca Mountain down Nevadans’ throats.

It was a threat designed to stop Reid from changing the rules, which currently means it takes 60 votes to stop a filibuster and pass a bill.

It was a “hit him where it hurts” threat.

Nevada’s other senator, Republican Dean Heller, warned that the 60-vote threshold has protected and saved Nevada in the past, and aligned himself with the GOP group who want the Senate rule to stay exactly the way it is.

What could Nevadans do?

Judy Treichel has been a voice for anti-nuclear advocates for decades, even before 1987 when a bill passed that said Nevada’s Yucca Mountain, 100 miles northwest of Las Vegas in Nye County, would be the only site considered for high-level nuclear waste storage.

Treichel began as a citizen activist, protesting against all things nuclear at the Nevada Test Site in 1982 in the first Lenten Desert Experience. Then she joined Citizen Alert and in 1987 became executive director of the Nevada Nuclear Waste Task Force, a state body reluctantly funded by nuclear energy companies.

But in 2011, after 24 years of “it’s dead, no, it’s alive,” the funding for licensing was cut off. The Department of Energy even closed its Yucca Mountain Project.

When it looked like there was little to fear except for a pending lawsuit that could revive licensing at Yucca Mountain, Treichel sat back, figuring she had done what she could. “I wanted to do something positive instead of just opposing something,” she said.

Treichel and Monica Brett are working on a project called “Energy Resilience and Risk Preparedness Project of Southern Nevada.” It will create an energy literacy curriculum for Clark County teachers to incorporate into their science, technology, engineering and math courses.

At 73, Treichel has not stopped trying to make her community better. “I guess retirement just isn’t in the works.”

But what about the potential that Nevada could get screwed again by 51 senators? Is she gearing up again for that fight?

When it comes to the filibuster fight “as far as taking action, there’s nothing I can actually do,” Treichel said.

The task force is closed. Some of the core group of a dozen nuclear opponents have died.

One tactic would be to follow the money, to show that a licensing startup would cost enormous sums.

“Why buy a new whip to beat a dead horse?” the pragmatic Treichel asked.

Treichel won’t be creating a protest march for cameras.

Yucca Mountain now is back in the hands of the ever-squabbling politicians looking for ways to gain an advantage and one-up one another. It’s political gamesmanship, and it’s all about rules and threats, empty and otherwise.

Like every predictable horror movie, it’s not over when you think it is.