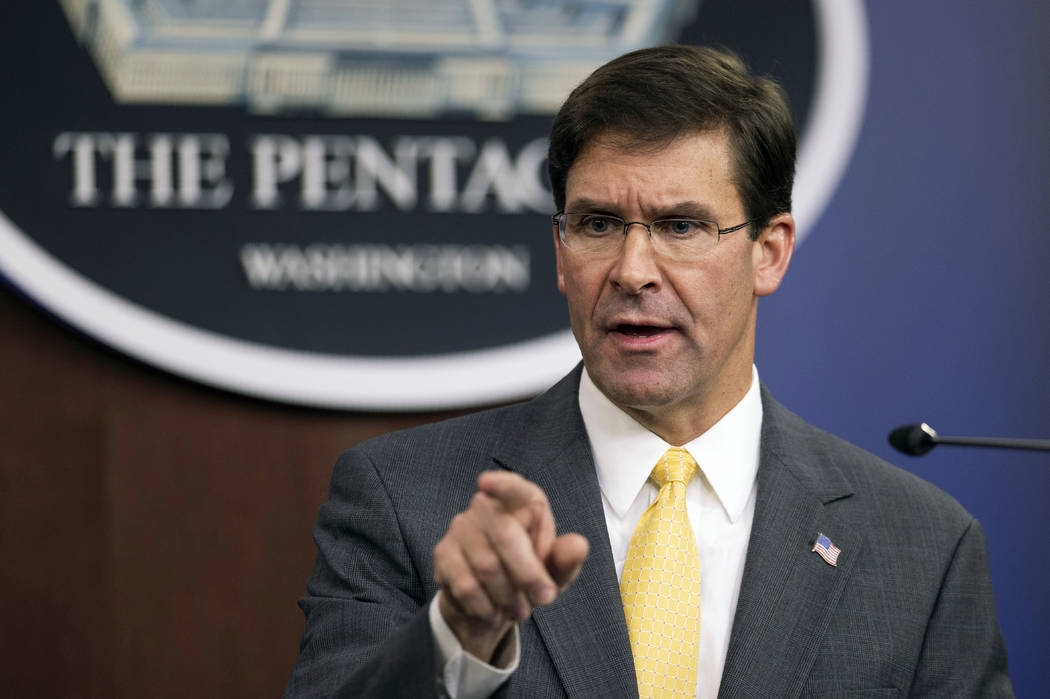 Secretary of Defense Mark Esper speaks to reporters during a briefing at the Pentagon, Wednesday, Aug. 28, 2019. (AP Photo/Manuel Balce Ceneta) 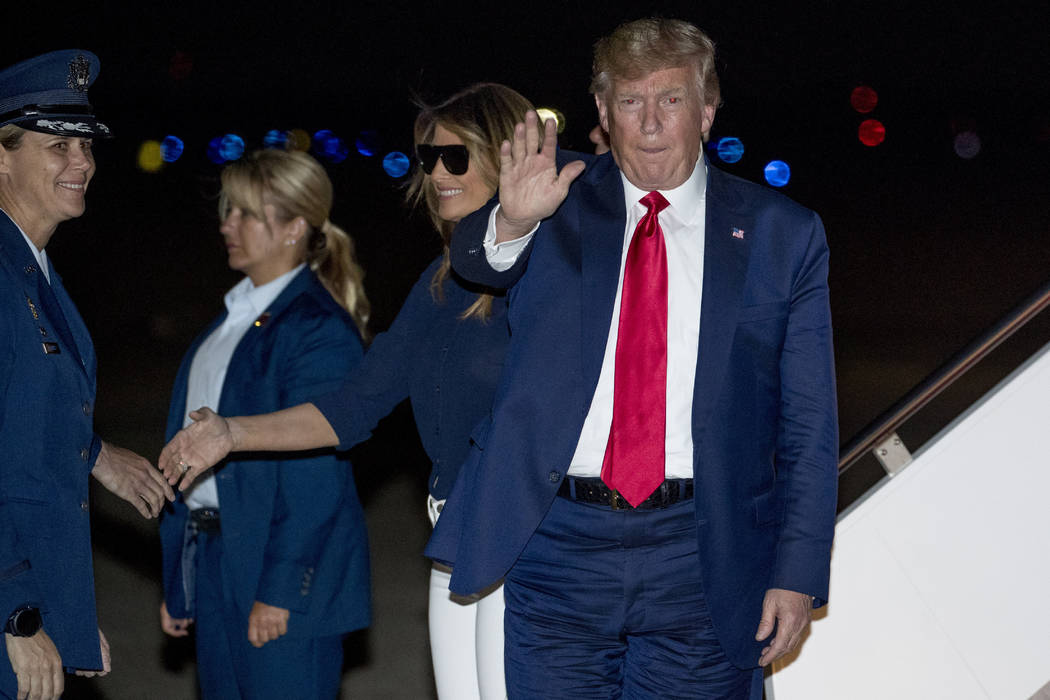 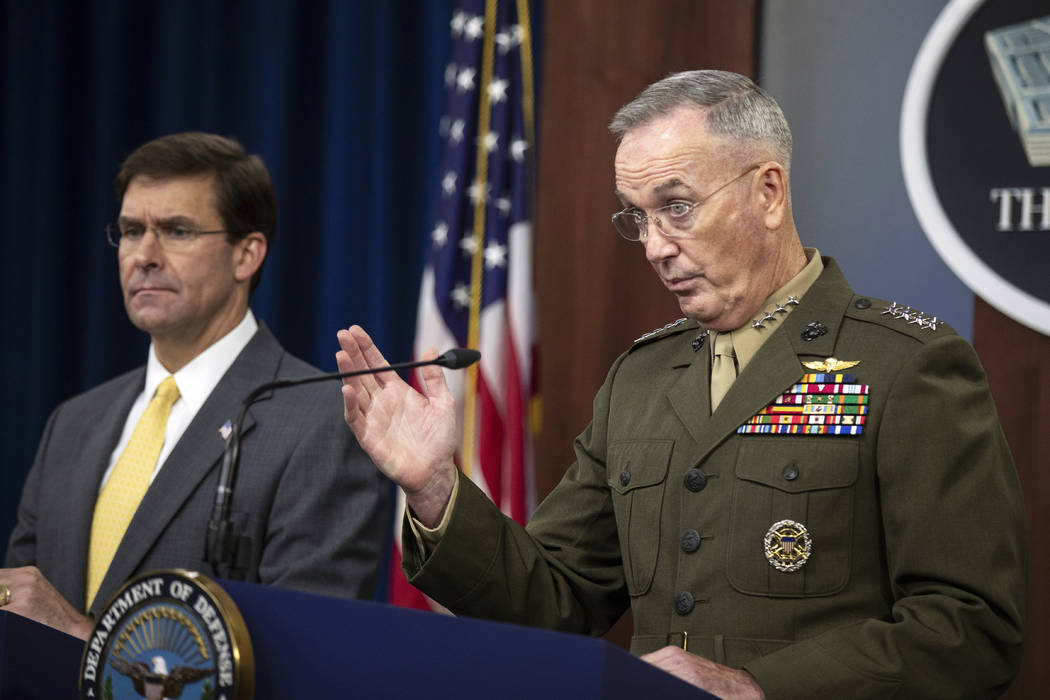 WASHINGTON — Mindful of President Donald Trump’s intense interest in space, the Pentagon is declaring U.S. Space Command open for business as part of a broader effort to better defend American interests in space.

But there’s still no Space Force.

Trump planned to participate in a ceremony at 1 p.m. PDT Thursday marking Space Command’s official establishment, or to be more precise, it’s re-establishment. The command existed for more than a decade before being eliminated in 2002 as part of the government’s post-9/11 reorganization.

Space Force, which has become a reliable applause line for Trump at his campaign rallies, has yet to win final approval by Congress.

The renewed focus on space as a military domain reflects concern about the vulnerability of U.S. satellites, both military and commercial, that are critical to U.S. interests and are potentially susceptible to disruption by Chinese and Russian anti-satellite weapons.

The role of the new Space Command is to conduct space operations such as enabling satellite-based navigation and communications for troops and commanders in the field and providing warning of missile launches abroad. That is different from a Space Force, which would be a distinct military service, in the way the Army, Navy, Air Force, Marine Corps and Coast Guard are distinct services.

Congress has been inching toward approving the creation of a Space Force despite skepticism from some lawmakers of both parties. The House and Senate bills differ on some points, and an effort to reconcile the two will begin after Congress returns from its August recess.

When Jim Mattis was defense secretary, the Pentagon was hesitant to embrace the idea of a Space Force. Trump’s first Pentagon chief initially saw it as potentially redundant and not the best use of defense dollars. His successor, Mark Esper, has cast himself as a strong supporter of creating both a Space Force and a command dedicated to space.

“To ensure the protection of America’s interests in space, we must apply the necessary focus, energy and resources to the task, and that is exactly what Space Command will do,” Esper said Wednesday.

“As a unified combatant command, the United States Space Command is the next crucial step toward the creation of an independent Space Force as an additional armed service,” he added.

Kaitlyn Johnson, a defense space expert at the Center for Strategic and International Studies, said she considers it likely, but not certain, that Congress will approve a Space Force in the 2020 defense bill.

The people in Space Force would be assigned to missions directed by Space Command, just as members of the Army and other services are assigned to an organization like U.S. Strategic Command.

Like other branches of the military, Space Force would be headed by a four-star general who would have a seat at the table with the other Joint Chiefs of Staff. Trump wanted Space Force to be “separate but equal” to the other services, but instead it is expected to be made part of the Air Force, similar to how the Marine Corps is part of the Navy.

Reestablishing Space Command has been a less politically contentious matter. There is a consensus that it is the most straightforward step among those proposed to shore of space defenses.

“This step puts us on a path to maintain a competitive advantage,” Gen. Joseph Dunford, chairman of the Joint Chiefs of Staff, said at a National Space Council meeting last week. He also endorsed creating Space Force, saying it would make a “profound difference.”

Initially, the opening of Space Command will have little practical effect on how the military handles its space responsibilities. Air Force Space Command currently deals with more than three-quarters of the military space mission, and it is expected to only gradually hand off those duties to the new command.

Johnson, the CSIS expert, said the attention to space during the Trump administration has led some to exaggerate the scope of change reflected in the moves to create Space Command and Space Force.

These moves, she said, “seem very flashy and fun” but are not.

“It’s really just a reorganization of functions that are already happening within the military,” she said.

At his Senate confirmation hearing on June 4, Raymond made the case for changing the way the military approaches its space mission.

“Unfortunately, our adversaries have had a front row seat into our many successes and have seen the advantages that they provide us,” he said. “And to be honest, they don’t like what they see. And they’re rapidly developing capabilities to negate our use of space and to negate the advantage that space provides.”

The political debate over creating a military service for space has focused in part on whether it would be worth the added bureaucracy and extra competition for defense dollars.

“There is no reason to believe that adding an entirely new Space Force bureaucracy and pouring buckets more money into it is going to reduce our overall vulnerability in space. I think the taxpayers deserve better than this,” Sen. Elizabeth Warren of Massachusetts, a Democratic presidential candidate, said at a Senate hearing in April that aired skepticism from Republicans as well as Democrats.