If you are having problems accessing today’s e-Edition, please click on this link VIEW E-EDITION
By ERICA WERNER THE ASSOCIATE PRESS
September 16, 2014 - 5:37 pm 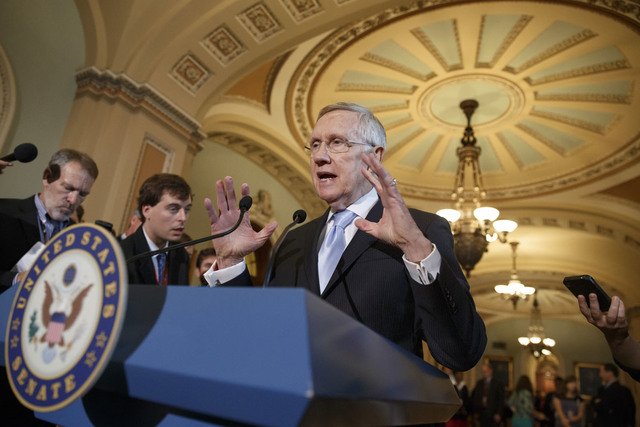 WASHINGTON — Amid action in Congress to intensify the fight against Islamic State militants, Senate Majority Leader Harry Reid found time Tuesday for an issue closer to home: ensuring that a nuclear waste dump in his home state of Nevada remains mothballed even after the government has spent $15 billion on it.

The confirmations come as Republicans have begun talking about trying to revive the Yucca Mountain project if they retake the Senate in November. The Obama administration, under pressure from Reid, abandoned the project early in the president’s first term, leaving tens of thousands of tons of spent fuel sitting at nuclear reactors around the country with nowhere to go.

“There’s been a huge investment made there and we’ve got to find a solution to store nuclear waste,” said Sen. John Hoeven, R-N.D. “One difference I can tell you for sure is that we’ll have votes on it. Whether we can advance it or not remains to be seen.”

Reid vowed Tuesday that Yucca Mountain, which he’s spent years working against and can take almost single-handed credit for derailing, would stay dead.

Senate Republicans would face an uphill fight to revive Yucca Mountain even if they do win back a majority in November, something that’s far from assured. The Obama administration has ended the Energy Department’s work on the project and shut down funding, and many of the government scientists who focused on the issue have moved on. Even as minority leader, Reid would retain significant influence to block action.

But having a potentially sympathetic majority on the Nuclear Regulatory Commission couldn’t hurt. Over Republican opposition, the Senate confirmed the nominations of Jeffery Martin Baran and Stephen G. Burns Tuesday, bringing its composition to three Democratic appointees and two appointed under a Republican administration.

“Whether these two nominees will act with impartiality and make decisions based on prudence and sound judgment will be seen,” Sen. David Vitter, R-La., complained ahead of the vote.

Congress designated Yucca Mountain in 2002 as the one national repository for spent fuel from dozens of power plants around the country over the objections of Reid and the Nevada delegation, but once Reid became majority leader in 2007 he acquired new clout to stop the dump.

He worked to position Nevada as an early nominating state in the 2008 presidential election, which helped ensure that Obama and other Democrats running for president made commitments to oppose Yucca Mountain. Once president, Obama and his appointees sought to shutter the site on a barren volcanic ridge in the Nevada desert frequented by jack rabbits and desert tortoises.

Reid pushed hard for a former aide, Gregory Jaczko, to lead the Nuclear Regulatory Commission, an independent agency that oversees commercial nuclear operations. Under Jaczko’s leadership the NRC allowed the Obama administration’s shutdown of the dump to stand, but Jaczko later resigned under pressure amid complaints of a bullying management style.

Last year, a federal appeals court ruled that the NRC was violating the law by delaying work and needed to complete the licensing process. And so the NRC is moving forward on a reduced budget with studying the project and making regular reports to Congress, but little is expected to come of it.

Even so, officials in states that want to get rid of their nuclear waste, and in the nuclear industry itself, hold out hope for a solution of some kind.

“We’re pleased that anyone is talking about it,” said Rob Thormeyer, spokesman for the National Association of Regulatory Utility Commissioners. “We are hopeful that the NRC can proceed, but we recognize that it’s going to take an act of Congress in all likelihood to get the ball rolling to the next level.”

Meanwhile, the Energy Department is trying to implement a new process for finding a different place for a nuclear dump, one where local residents will welcome it. And there is discussion of turning the Yucca Mountain site into a data storage facility.