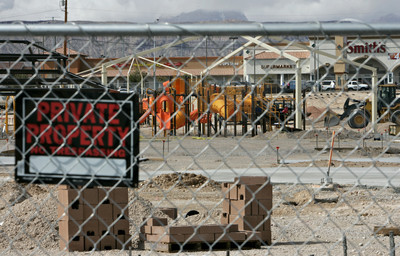 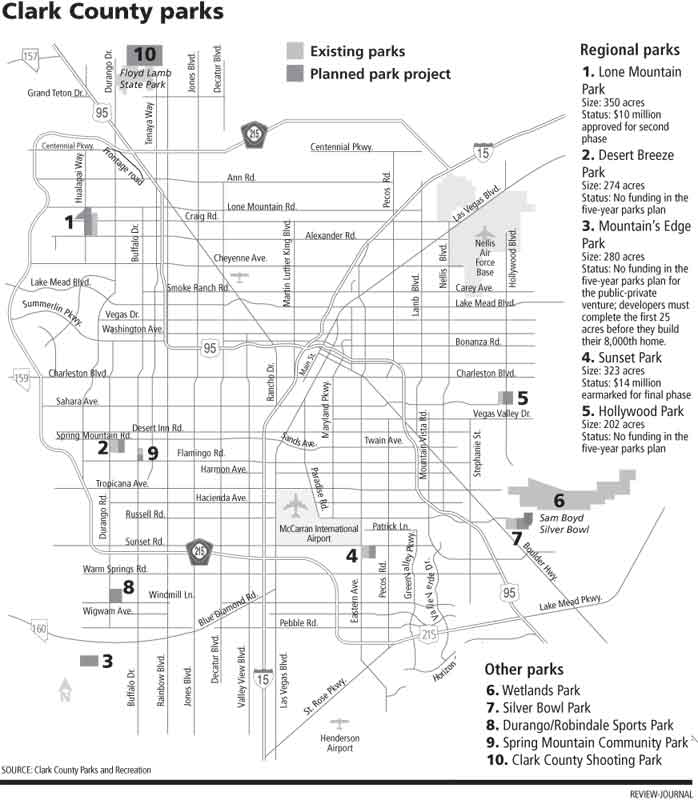 Children dash around a playground, shouting, giggling and jumping onto a slide.

Off to the side, two parents sit and watch their three kids from a bench in front of a brown, sandy expanse that Hollywood Park could one day encompass, though no one knows when.

Aside from a play area, the park already has a gym, recreation center and skateboard arena.

Francisco Castaneda, 41, says what he’d really like is a bike path for his children.

"They want to ride their bicycles, but the street really isn’t safe," he says.

Castaneda could wait a long while. Although the park’s future phases call for a bike and walking trail, as well as a swimming pool and amphitheater, Clark County has earmarked no funds for Hollywood Park for at least five years.

In an area billed as a tourist playground, the county can find it difficult to supply the kinds of parks that residents want, because of limited money and an effort to distribute parks fairly throughout the valley.

The county often completes the first phase of a large, multi-faceted park and then begins another park elsewhere, making neighbors wonder why their partially finished park goes untouched for years.

Park officials say they must take this piecemeal approach to serve a multitude of areas while meeting the goal of developing 2.5 acres of parks per 1,000 unincorporated residents.

If all the available money and staff went toward finishing one large park at a time, the county would neglect other neighborhoods, said Bruce Sillitoe, the county’s parks planning manager.

"It would absolutely be focusing all our attention on one area at the expense of other areas," Sillitoe said.

People see the master plan, not realizing that much of what’s penciled in for future phases is an unfunded wish list, he said.

But one resident argued that parks don’t get built faster because the county seems to put them low on its priority list.

If so, that’s too bad, because parks are one way to measure an area’s quality of life, said Lisa Mayo-DeRiso, a community activist and business consultant.

"Do people have a place to escape and be out in the open?" Mayo-DeRiso said.

She said she understands how essential services could beat out parks for funding. However, parks also might lose out to developers who need the county to help fund streets and infrastructure for big subdivisions, she said.

But Sillitoe said local funding for parks comes mostly from homebuilders who pay a tax of 36 cents for every square foot of construction, with a $1,000 maximum per unit.

Regional parks are at least 161 acres, and are placed strategically in the urban areas with the aim of having one within 5 miles of every resident of unincorporated Clark County.

Community parks are mid-sized, ranging from 26 to 160 acres.

Neighborhood parks are 5 to 25 acres, and the goal is to put one within a mile of each resident.

In today’s dollars, the regional parks would cost roughly $257 million to bring to their current stage, he said, and completing all the master plans would cost $1 billion.

Lone Mountain and Sunset are the only regional parks with funded projects in the county’s five-year park plan, receiving $10 million and $14 million, respectively, Sillitoe said.

Lone Mountain’s funds will pay for its second phase, adding playgrounds and an open sports area.

Funding for Sunset will allow the county to finish its first regional park, Sillitoe said, noting that the project began in the 1960s.

As for community parks, Spring Valley and an unnamed park informally dubbed Tropicana Decatur got $6 million and $14.4 million, respectively.

Regional parks cost the most to develop per acre because they have more concrete and steel, whether it’s a gymnasium, swimming pool or a skateboard area, he said.

On average, the annual cost of maintaining all county parks is $9,055 an acre, the equivalent of one employee tending 10 football fields, Sillitoe said.

The Bureau of Land Management sometimes chips in money from its land sales to help create county parks, Sillitoe said.

For example, a $64 million BLM grant will be used to pay for the first phase of a 2,900-acre shooting park just north of Las Vegas.

Occasionally, the BLM will transfer land to the county, but mainly the county leases land from the agency, he said.

The county must figure out which BLM tracts it needs to lease for parks before the BLM sells off the land, he said.

Creating parks is especially critical in the booming area south of Flamingo Drive and west of Interstate 15, which has just 1 acre of parks per 1,000 people.

"We’re struggling to keep up with the demand," Sillitoe said.