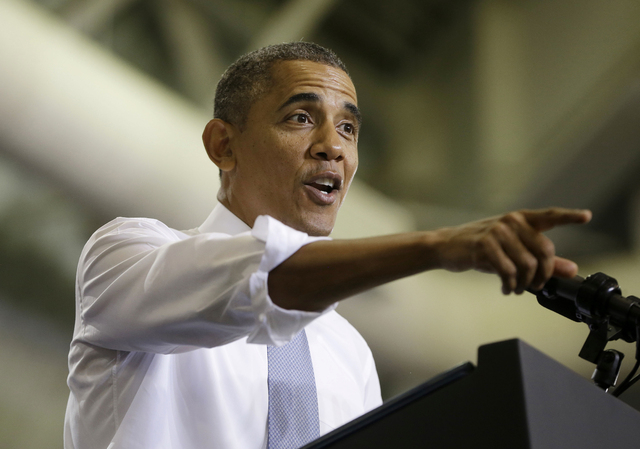 If you’re looking for good news, don’t read about this week’s rollout of Obamacare coverage. The insurance exchanges that are central to the Patient Protection and Affordable Care Act go online Tuesday, and with each passing hour, more and more problems are revealed.

The Review-Journal’s Jennifer Robison, in an extensive report today, outlines what Nevadans can expect and how they should proceed once the exchanges open. It appears the Silver State Health Insurance Exchange is in better shape than any other state-federal marketplace and will be ready to go come Tuesday. But that doesn’t mean its success is anywhere near a given. For the exchange to meet its first-year goal, Ms. Robison reports, it will have to sign up 323 people every day, including weekends and holidays — a whopping total of nearly 118,000.

And unless a lot of those customers are young, Obamacare won’t pencil out. Although older Americans compile the vast majority of this country’s health care expenses, their premiums cannot cost more than three times what younger Americans pay. That means the young and healthy will face huge premium increases. As Avik Roy pointed out Wednesday at Forbes.com, Obamacare exchanges will increase the average individual market insurance premium by 97 to 99 percent for younger men and 55 to 62 percent for younger women.

Just last week, myriad additional problems came up or finally were stumbled upon. The exchange in Washington, D.C., purported to be among the most ready for Tuesday’s rollout, isn’t ready. As reported by The Washington Post, the D.C. Health Link will launch its website Tuesday, but consumers won’t have access to policy prices until mid-November. Let’s see how many people agree to buy something when they don’t know the price. Health Link announced the delay because of what it termed “a high error rate” in calculating the tax credits that low- and middle-income residents will use to purchase insurance from the marketplace.

Colorado’s exchange also is having issues. Customers won’t be able to get online tax credits for at least the first month — they’ll have to phone in and wait to speak with an exchange representative if they want the credits. That certainly won’t help the state reach Obamacare’s targets for healthy 20-somethings.

If you’re married and are forced onto the exchanges, the penalties can be life-altering, regardless of your age. Ed Driscoll of pjmedia.com outlined the incredible costs of the law’s marriage penalty in two examples.

His first example was a 60-year-old couple with no children with identical incomes totaling $65,000. After taxes and such, that income goes down to around $50,000. Their Obamacare exchange Silver Plan Premium: $16,382, 33 percent of their take-home pay. By making even $1 over the $62,040 exchange subsidy threshold, the couple lose more than $10,000 in taxpayer support. There’s no gradual decline in the subsidy as a couple’s income climbs — it falls off a cliff after a single dollar. If the couple formally divorce, but stay together under the same roof, they’d get that $10,000 subsidy.

Mr. Driscoll’s second example was a 40-year-old couple with two children, with one spouse earning $70,000 and the other earning $23,000. The net average premium if they are married is $11,547, because their income exceeds the $92,401 threshold for family subsidies. But if the two divorce and custody of the kids goes to the lower-earning spouse, their combined annual premium drops to $4,317.

In both cases, the savings would increase in the years following — but only if they act on the perverse incentive to divorce. Their other option is to make less money. The subsidy cliff applies to individuals as well. Obamacare will encourage people to work less, once they figure out the subsidy game, hardly a good policy in a bad economy.

USA Today reported last week on the law’s “family glitch” for companies that offer coverage only to employees, not their family members. That glitch could leave up to 500,000 children without coverage, because they won’t be eligible for subsidies.

Millions of Americans who are self-employed or who buy health insurance on the individual market have been notified by major insurers that, in fact, if they like their plan, they can’t keep it, because it doesn’t exist anymore. And replacement plans aren’t likely to include their preferred providers, so they can’t keep their doctors, either. Conservative columnist Michelle Malkin, whose family lost their coverage as a result of the law, wrote, “Obama lied. My health plan died.”

Principled congressional Republicans who have pushed hard for defunding this nightmare and enacting market-oriented health care reforms have it right. Change is needed, but this is not the change you were looking for. Less government will make health care more affordable. End coverage mandates. Sell insurance across state lines and make it portable. Emphasize coverage for illness and injury instead of routine care.