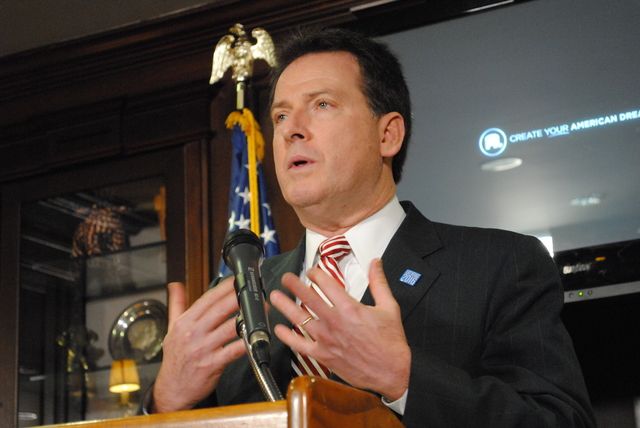 From the start of the U.S. Senate race between GOP Rep. Joe Heck and former Democratic Attorney General Catherine Cortez Masto, Nevada Republicans have insisted on labeling her “corrupt.”

Now, as part of their evidence, they offer Kate Krolicki, daughter of former treasurer and lieutenant governor Brian Krolicki, to lament on video about how the vengeful ex-AG indicted her father — “who was an innocent man.”

Since the GOP brought it up, perhaps now is a good time for a trip down Memory Lane.

First, let’s stipulate that everyone under the American system of justice is innocent until proven guilty. The issue presented here is this: Did Cortez Masto have a reasonable basis to proceed with a felony indictment against Krolicki? Or was the case entirely political, intended to thwart a planned Krolicki run for U.S. Senate against Harry Reid, as Republicans contend?

Let’s examine the facts: Cortez Masto came to oversee the case only after auditors for the Legislative Counsel Bureau reported in December 2006 that Krolicki had personally told the private company managing the state’s College Savings Program not to remit money to the state, as the law required. More than $6 million was thus held outside state accounts, and some of that money was used to promote the program in spots starring … Brian Krolicki!

It’s important to note that Krolicki was never accused of misspending or pocketing any of the money, which was earmarked to pay for advertisements touting the savings plan. But he didn’t follow the letter of the law and ended up spending more than the Legislature had authorized, the audit found.

You can argue, if you wish, that nothing here rose to the level of a felony, that Cortez Masto could have sought lesser penalties, or even ignored the violation. But the audit provided ample evidence to suggest the law was broken.

After a state investigation and a grand jury presentation, Krolicki was indicted. His defense lawyer, the estimable Richard Wright, attacked the indictment, alleging it was legally deficient. And District Court Judge Valerie Adair agreed in a Dec. 7, 2009 ruling “that the indictment does not provide sufficient notice of the charges.”

It should be noted that the five-page ruling didn’t address the merits of the underlying charges against Krolicki, but only the sufficiency of the grand jury’s indictment. Krolicki never went to trial, and no judge or jury ever ruled on his guilt or innocence. The only thing at issue was whether the state could sustain the charge, which it could not.

From these facts Republicans contend Cortez Masto is corrupt and that she indicted an innocent man for political reasons? If so, her prosecutors did a rather poor job of it, and left Cortez Masto with a Hobson’s choice: Drop the case, or proceed with an appeal that appeared to have little chance of success.

On Tuesday, after I posted on Twitter a link to the original legislative audit report so readers could decide for themselves whether there were violations and how serious they were, a Republican operative responded by quoting a line from a Dec. 8, 2009, piece I’d written for Las Vegas CityLife. He was trying to argue that I’d criticized Cortez Masto at the time and was defending her now.

Perhaps he skipped over the headline of that piece — “In defense of Catherine Cortez Masto” — or missed its main conclusion: She had a “very reasonable” basis to bring an indictment, and “there remains ample evidence of a violation of state law and [the] decision appears to have more to do with how the case was presented than whether there was a case to begin with.”

By the way, I stand foursquare behind that conclusion.