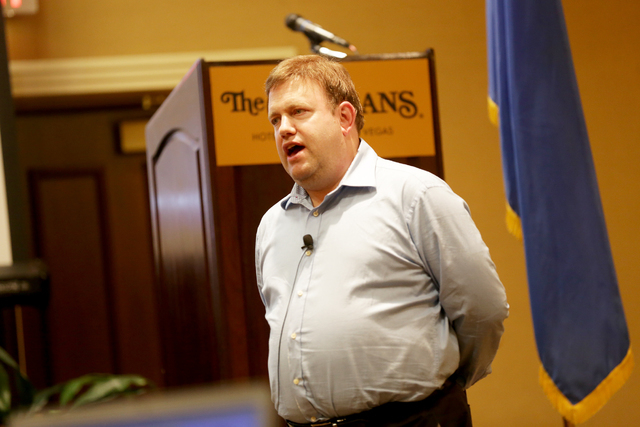 Whether it’s appearing on HBO’s “Real Time with Bill Maher” or doing focus groups on the “CBS Morning News,” Luntz seems to be going about his job with less joy than before.

On Monday, I asked him how he was doing.

He added: “If you came with me and listened to what people say [in his focus groups], it would give you a headache.”

Never before has a campaign been this contentious, Luntz said. Never has it been this issue-free. Never have the candidates been more disliked by large percentages of the electorate.

Luntz spoke to the Las Vegas Metro Chamber of Commerce’s breakfast “Eggs & Issues” meeting at The Orleans on Monday, telling the crowd that Democrat Hillary Clinton still has a slight advantage over Republican Donald Trump.

Her campaign has the organizational infrastructure and discipline that Trump’s effort lacks, he said.

But, he cautioned, it could be close. So close, in fact, that Clinton could win the Electoral College while losing the popular vote to Trump.

It’s also ironic because Luntz traces the roots of modern political enmity to 2000, when Democratic supporters of Gore refused to concede the race after the U.S. Supreme Court halted the disputed Florida recount. As a result, they never acceded to Bush’s legitimacy as president. From then on, the fighting got more vicious and the divisions grew deeper. “That was the beginning of the poison,” he said.

And while Luntz didn’t say it, it’s obvious that the discredited “birther” movement — which posits that President Obama is not a “natural-born citizen” and is thus ineligible to serve as president — is another, uglier form of robbing a duly elected president of legitimacy.

Later Monday, I asked the manager of the 2000 Gore campaign, Donna Brazile, about Luntz’s theory. Unsurprisingly, she disagreed.

“As a student of Washington, D.C., and a professor at Georgetown [University], this started long before 2000,” Brazile said. “I mean, 2000 might have been a milestone in the country becoming hyper-partisan, but I saw it back in the late 1980s. I saw it in the 1990s under the leadership of Bill Clinton.

“So if you want to mark the date, was it 1976? Was it 1980? Was in 1984, 1988? It doesn’t matter,” she concluded. “The problem is we have too many people in our country who believe the only way to make progress is to have either a Republican-led government or a Democratic-led government, and not a government by the people and the values we share as Americans. And I think that’s at stake.”

And so does Luntz. He said Trump’s repeated assertions that the system is “rigged,” and that a victory for Clinton would be proof of it, is potentially laying the groundwork for another four or eight years of the same kind of division we’ve seen.

If Clinton does win, Luntz said, will she spike the ball? Or will she take a step toward reversing the toxic sludge in which modern politics stews, reaching out to Republicans, saying she wants to be the president for all the people? Will she say the election is over and now it’s time to compromise and find common ground? And will her former Republican rivals accept such an offer?

Perhaps it’s naïve to even mention it out loud. But it sure beats being depressed all the time.

Steve Sebelius is a Review-Journal political columnist. Follow him on Twitter (@SteveSebelius) or reach him at 702 387-5276 or SSebelius@reviewjournal.com.