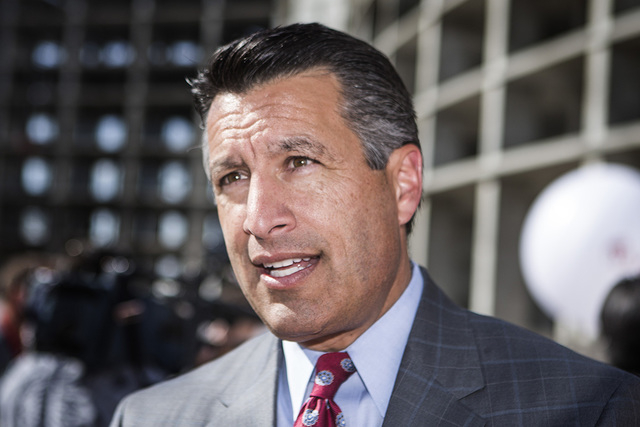 Gov. Brian Sandoval’s decision — announced Tuesday — not to seek the U.S. Senate seat held by retiring Harry Reid will be perhaps the least surprising news in Nevada politics all year.

But the rhetoric surrounding it and the events it will set in motion are still interesting.

First, Sandoval isn’t exaggerating when he says he loves being governor. Not only that, but he’s good at it, as the most recent legislative session proves. He used his personal charm and earnest powers of persuasion to convince a supermajority of legislators to raise taxes for education after the biggest Republican wave in decades. That’s talent.

But Sandoval’s heart has always been more in governing than it has been in fighting the pitched political battles required to get there. His political victories have always been lopsided affairs, victories over underwhelming opponents, slowly building a popularity so big, nobody of any stature rose to challenge him on his second and final re-election as governor.

Still, there were those who said Sandoval might not be able to resist following in the cowboy-booted footsteps of his mentor, former Gov. and U.S. Sen. Paul Laxalt.

“In 1984, Nevada Senator Paul Laxalt gave me the opportunity of a lifetime to serve as a legislative intern in his office in Washington, D.C.,” Sandoval said in his short statement about passing on a run. “Coming from humble beginnings, the experience changed my life and charted me on a path of public service. It never occurred to me then that I would someday have an opportunity to be a candidate for the United States Senate.

“I have said many times that it is an honor and a privilege to serve as Nevada’s chief executive and that I love my job. My heart is in my responsibilities as Governor and continuing to build the New Nevada. My undivided attention must be devoted to being the best governor, husband and father I can be.”

Two things here: First, although Sandoval once told commentator Jon Ralston that his support of a big tax plan in this year’s Legislature made it unlikely he’d run for higher office, taxes had little if anything to do with this decision. Sandoval could and would have easily beat back any primary opponent who ran on an anti-tax platform, and his education reforms would have done nothing but boost his candidacy.

For proof, look no further than state Sen. Michael Roberson, who’s now reportedly contemplating a run for Congress. He was the governor’s most ardent defender and ablest aide during the 2015 session. If Roberson decides to make a bid, it will be one untroubled by his support for Sandoval’s tax and education reforms.

Second, although Sandoval probably never intended to run, it’s still a setback for Republicans. The governor is clearly the best candidate, one whom the likely Democratic nominee, former Attorney General Catherine Cortez Masto, declined to challenge for governor in 2014’s elections, and wisely so. You can’t say the recruiting machine failed when Sandoval was never really in play, but you must acknowledge the Republicans nonetheless suffered a setback on Tuesday.

Having said that, however, the race is by no means over. Masto will likely face Rep. Joe Heck, the 3rd Congressional District representative who has enjoyed wide victories since narrowly defeating the formidable Dina Titus in 2010. Unlike Masto, Heck has never run a statewide race. But also unlike Masto, Heck will play well in the rurals and can draw from a Southern Nevada base. He starts in a strong position.

This announcement doesn’t end Sandoval’s political career: He’s been talked about as a potential vice-presidential choice, or even a Cabinet secretary after the 2016 election. A judicial appointment, say, to the 9th U.S. Circuit Court of Appeals, with the potential for elevation, someday, to the U.S. Supreme Court, isn’t out of the question, either. But even if none of those things happen, there’s something to be said for filling out one’s entire term, focusing on the job at hand and leaving a lasting legacy for one’s state. Sandoval has done all of that.