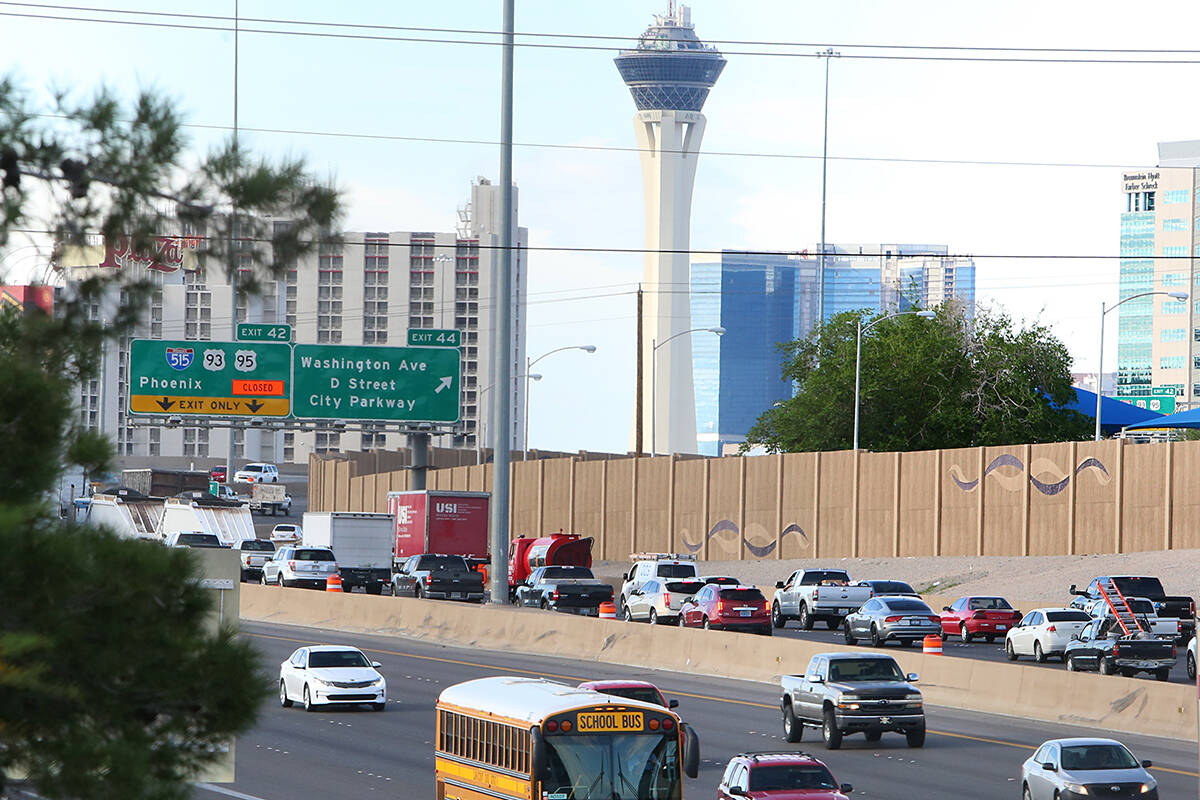 Heavy traffic during the first morning of the "Big Squeeze" along U.S. Highway 95 South at the Spaghetti Bowl in Las Vegas on Tuesday, March 21, 2017. (Bizuayehu Tesfaye/Las Vegas Review-Journal) @bizutesfaye 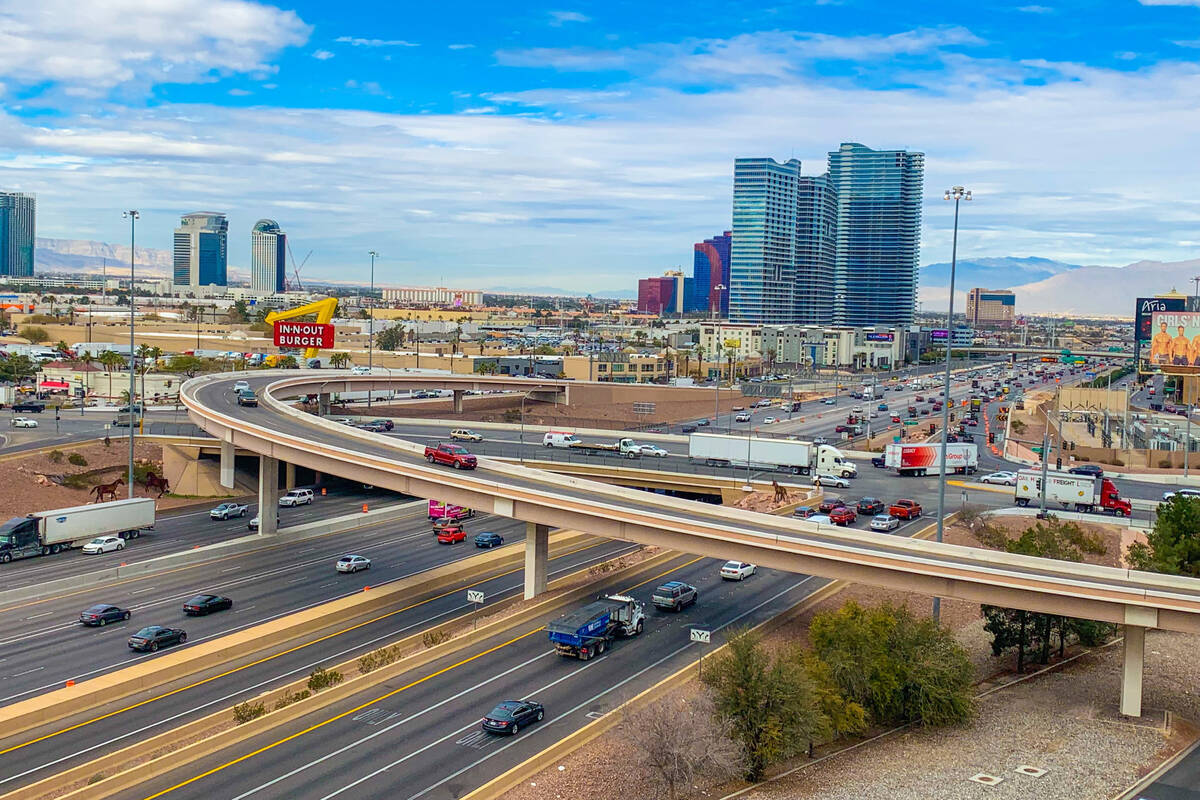 The Interstate 15, Tropicana Avenue interchange, seen here on Jan. 31, 2019, is set for a $230 million upgrade. Construction on the project is slated to begin in 2021 and finish in 2024. (Mick Akers/Las Vegas Review-Journal)

Southern Nevadans will continue suffering on the roads from now until the end of time, according to a whistleblower with intimate knowledge of Las Vegas Valley transportation planning.

Speaking via encrypted text, the whistleblower claimed to have insight directly from the innermost circle of hell, where he says all Las Vegas transportation plans are created before being delivered to government agencies on Earth.

The whistleblower — a senior devil who claimed he’s seen communications from Satan himself — requested anonymity in order to speak candidly about confidential matters.

“Like all devils, I used to be an angel, until I joined the rebellion against the Almighty,” the whistleblower said. “And, I’ve been down with tormenting humans for thousands of years. But when I saw these plans, even I had to object.”

The final straw, the senior devil said, came when he saw drawings of the Interstate 15/Tropicana Avenue rebuild, along with calculations of the Human Misery Index associated with the project. The scale usually runs from 0 to 100, but the I-15/Trop project was rated at 124, according to a document prepared by the Ministry of Torture and Torment.

“It’s just absolutely off the charts,” the whistleblower said. “The Inquisition itself was only a 98!”

According to the whistleblower, Las Vegas transportation projects have been designed to inflict greater and greater amounts of misery, so as to increase the incidence of sins such as wrath and murder. They are also designed to maximize revenue for companies, including Las Vegas Paving Co., as part of an unrelated soul-selling agreement.

Many humans involved in the road-building and planning industries have no idea they’re really working for Satan, or that their talking points are actually written by demons in the Ministry of Public Disinformation and Gaslighting.

For example, at the kickoff for the I-15/Tropicana project, Gov. Steve Sisolak said: “I don’t look at it as a headache. I look at it as an opportunity. This is going to make transportation better, safer and more convenient. Will there be some minor inconveniences for a couple of years? Absolutely. … I think the short-term sacrifice for the long-term gain is going to be something that we’re all happy with.”

According to the whistleblower, Sisolak’s remarks were almost identical to those drafted by Hell’s PR wing.

“That headache/opportunity line? That’s a classic down here,” the whistleblower said. “We use ‘opportunity’ all the time when we’re getting people ready to really suffer.”

But more insidious, the senior devil said, is the fact that officials including the governor always say the pain will be short term, but never seem to notice that construction projects and the attendant misery never ends! “You think it’s a coincidence we did Summerlin Parkway and then the Spaghetti Bowl and then Project Neon and then The Big Squeeze and now I-15 and Trop, all in a row?” the whistleblower asked. “Of course not! It’s all a diabolical design.”

He added: “The humans in charge of roads always want you to focus on a future in which they get you to think that the streets will be smooth and uncrowded and construction-free, but that future doesn’t exist! We’ve got a whole timeline of projects stretching from now until the Second Coming.”

Continual construction is just one element of the faith-testing torment, too. According to the whistleblower, the idea of tearing up roads running north-south and east-west at the same time was pioneered in Las Vegas, as was the concept of working on parallel arterial streets simultaneously, so drivers have no hope of escape. Signal light timing is controlled directly from The Pit. And the diabolical concept of phantom construction zones, where perfectly good lanes are coned off for days, weeks or even months with no humans present, was created in the Torture Ministry.

But the devil’s favorite trick, the whistleblower said, are the carpool lanes, where frustrated drivers often take the Lord’s name in vain as they sit in bumper-to-bumper traffic aside perfectly good, unused pavement that they paid for with their taxes. “Somebody got his arch-demon wings for that one,” he said. “It has yet to be outdone.”

But that doesn’t mean devils all over hell aren’t trying, the whistleblower said. “Our business is making humans question the existence of a loving God and despair of their own existence. And, with the unwitting help of your transportation bureaucracy, business is good!”