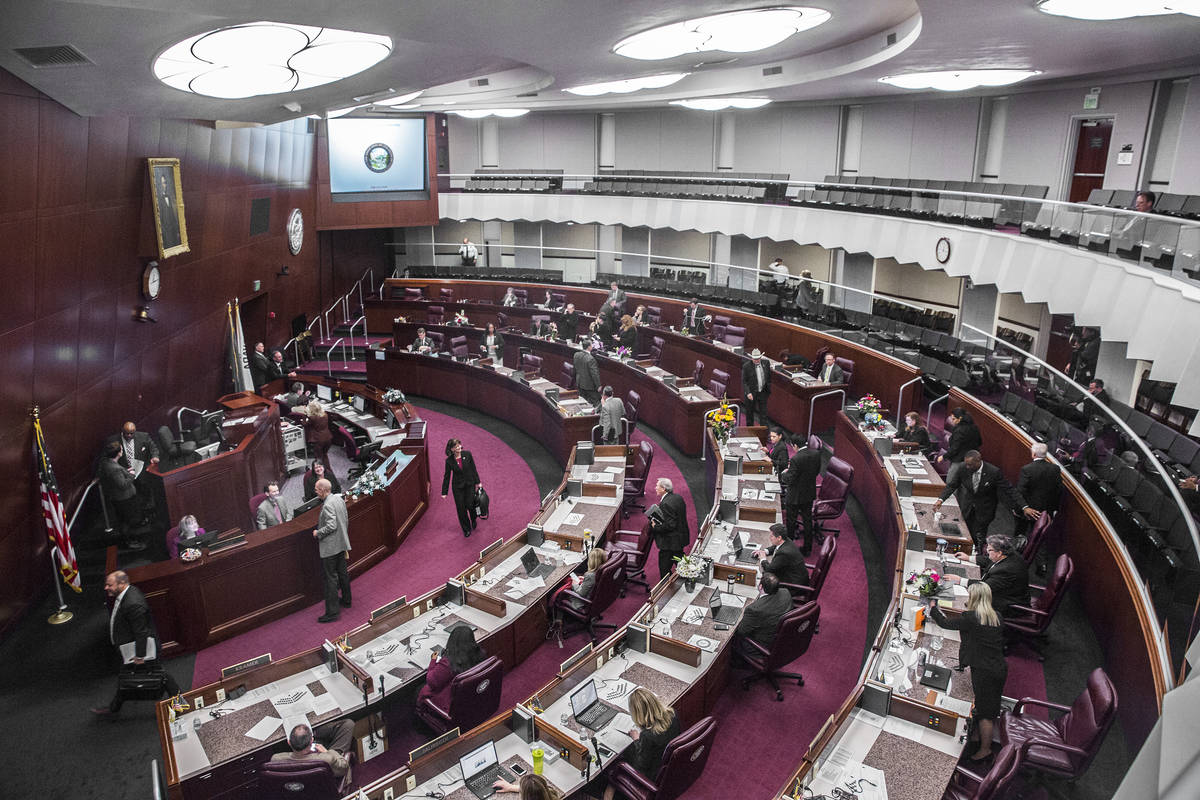 She won her 2016 race by just more than 1,000 votes despite a Democratic registration advantage of nearly 5,000.

After the 2017 session, she was targeted by Republicans for a recall, and the president of the Senate — then-Lt. Gov. Mark Hutchison — argued in court for her ouster. The recall ultimately failed.

Just a month into the 2019 session, she got an unexpected promotion, when former Majority Leader Kelvin Atkinson resigned and pleaded guilty to campaign finance charges.

She — and a number of other public employees who serve in the Legislature — have been sued by the Nevada Policy Research Institute, which contends their service violates the state constitution’s separation of powers clause. (That provision says no one who exercises the powers of one branch of government … say, the Legislature … may exercise the functions of another … say, working as a deputy district attorney in Clark County, which Cannizzaro does.)

Speaking of her day job, some police groups have turned on Cannizzaro for bringing a bill in a special session this year to increase police accountability. That measure amended parts of legislation she authored in 2019 that progressive groups contended gave cops too much cover.

You’d be excused for thinking that Cannizzaro might not even want the job anymore.

But you’d be wrong.

Although she admits her political career did “take a different path than what would ordinarily be expected,” she’s still enthusiastic about the work. She recalls growing up in Las Vegas in a working-class family, getting a good education, going on to college in Reno (the first in her family to do so) and then to law school at UNLV. She says she wants to make that path possible for other kids and working families.

She does admit she’s surprised at some of the attacks, including the police union that claimed she sided with criminals over cops. (An interview for this column had to be scheduled around one of Cannizzaro’s criminal prosecutions.)

“I think it’s absurd to think anything other than I support law enforcement,” she said.

She’s also disappointed at the increasing partisanship in Carson City, evidenced in the attempted recalls, although her political foes would say her tenure as leader has contributed to that trend.

And she’s fighting attacks based on two bills passed in the 2019 session, both of which extended taxes that were set to either decrease or vanish entirely, in order to support education. Armed with a memo from the Legislative Counsel Bureau, she pushed through the bills without a single Republican vote, but one shy of a two-thirds supermajority that the GOP said was required.

Last month, a state District Court judge agreed, striking down the taxes as unconstitutional. The case is being appealed to the Supreme Court.

“We believe that (moving forward with a simple majority) was the right decision,” she said.

But Cannizzaro still has a battle on her hands in the person of April Becker. A fellow lawyer, Becker is campaigning on typical Republican themes, but in an unusual way. She bought an old ice cream truck, for example, and meets would-be constituents while handing out frozen treats.

Becker makes hay out of Cannizzaro’s “illegal tax.” A self-identified nerd, Becker says she’s driven to distraction by conflicting or poorly constructed statutes. And she’s no fan of regulations. (Her ice cream truck was subject to all kinds of rules, she discovered.)

Becker was put up as a potential replacement for Cannizzaro in the ill-fated recalls, although she says she considered running in 2016.

Things look slightly better for Cannizzaro this year. The Democratic advantage in her district has grown from 4,700 Democrats to nearly 7,000. (There are nearly 19,000 nonpartisans there, too.)

But plenty of money is being spent to oust Cannizzaro, including ads that use her own voice against her, charging she tried to increase her pay by advocating for annual sessions of the Legislature. (Nevada is one of four states in which the Legislature meets but once every other year.)

Cannizzaro’s 2016 margin of victory is troubling, too. And unlike her 2016 opponent, then-Assemblywoman Victoria Seaman, Becker has no public record to attack. After four years, Cannizzaro does.

If any of that bothers Cannizzaro, she’s not letting it show. And, once again — for the record — she’s still loving the job, despite a freshman year that would make the hardiest politician reconsider.