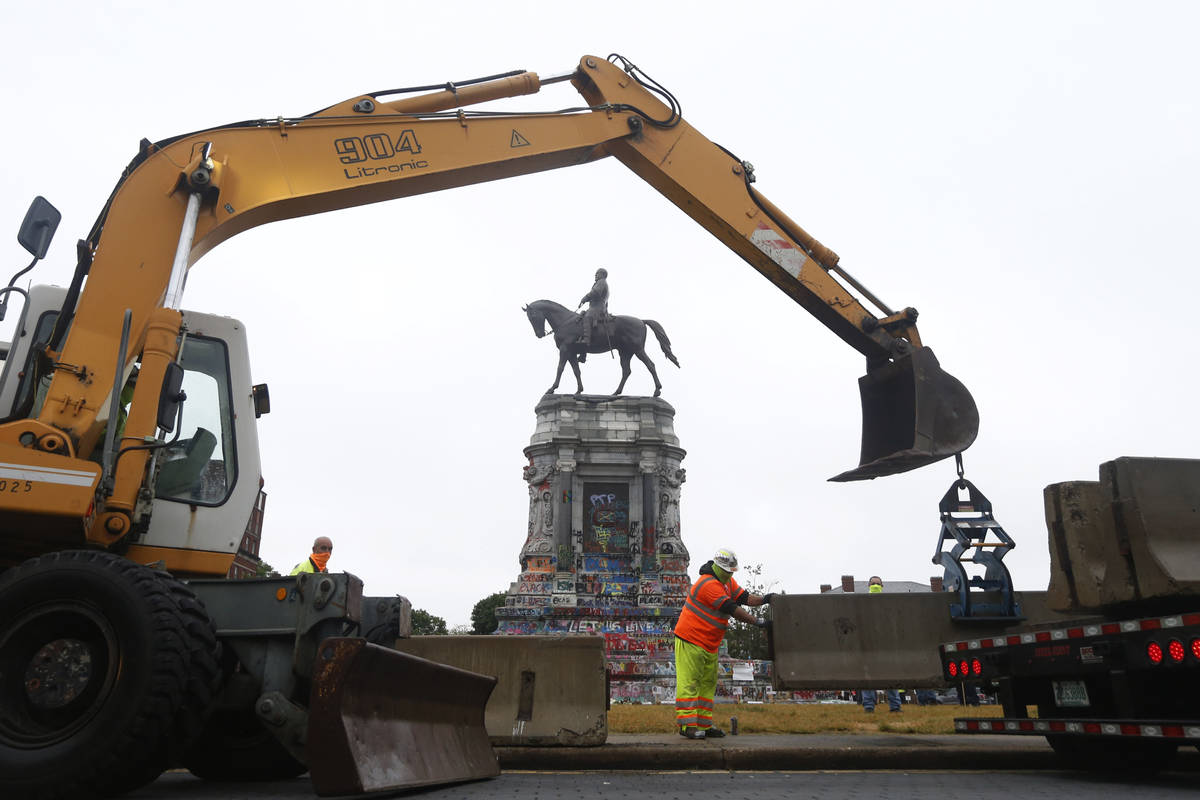 Workers for The Virginia Department of General Services install concrete barriers around the statue of Confederate General Robert E. Lee on Monument Avenue Wednesday, June 17, 2020, in Richmond, Va. The barriers are intended to protect the safety of demonstrators as well as the structure itself. (AP Photo/Steve Helber) 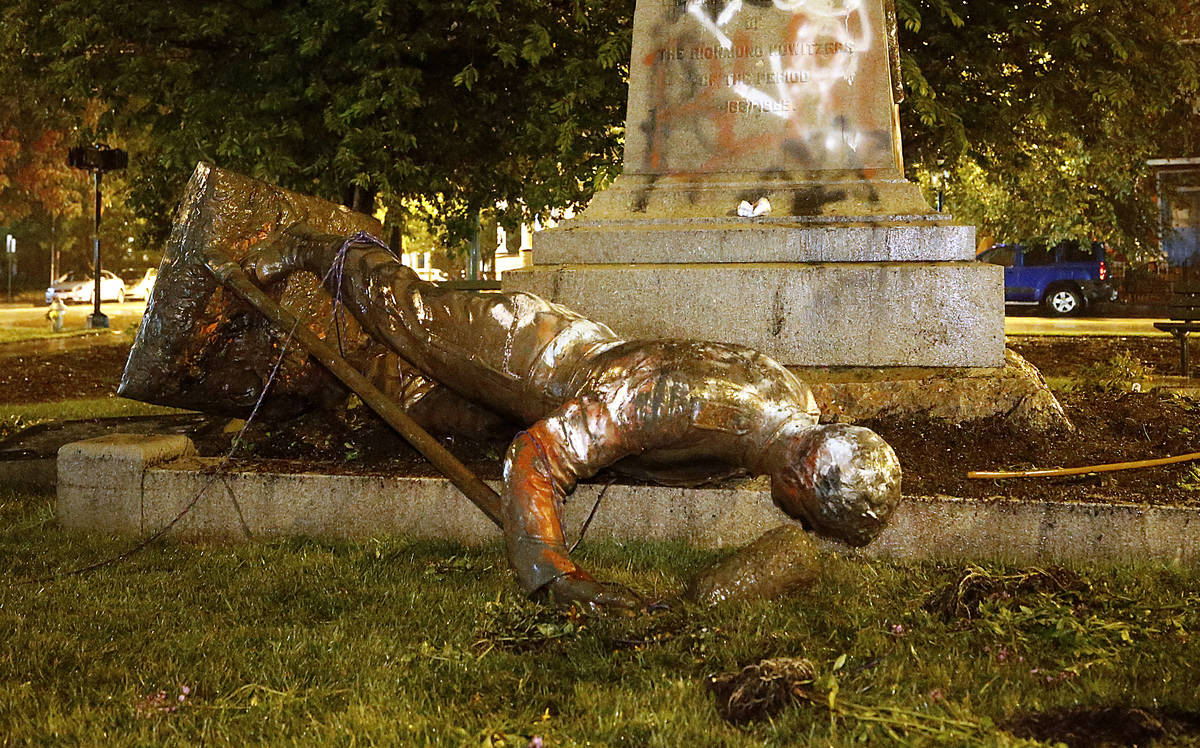 A statue from the Richmond Howitzers Monument in Richmond, Va., lies after being toppled Tuesday night, June 16, 2020, in Richmond, Va. The monument was erected in 1892 to commemorate a Richmond Civil War artillery unit, (Alexa Welch Edlund/Richmond Times-Dispatch via AP)

Unlike coups or political revolutions, cultural revolutions don’t just change governments or leaders. Instead, they try to redefine entire societies. Their leaders call them “holistic” and “systematic.”

Cultural revolutionaries attack the very referents of our daily lives. The Jacobins’ so-called Reign of Terror during the French Revolution slaughtered Christian clergy, renamed months and created a new supreme being Reason.

Mao cracked down on supposed Western decadence like the wearing of eyeglasses and made peasants forge pot iron and intellectuals wear dunce caps.

The current Black Lives Matter Revolution has “canceled” certain movies, television shows and cartoons, toppled statues, tried to create new autonomous urban zones and renamed streets and plazas. Some fanatics shave their heads. Others have shamed authorities into washing the feet of their fellow revolutionaries.

But inevitably cultural revolutions die out when they turn cannibalistic. Once the Red Guard started killing party hacks too close to Mao, it began to wane.

If toppling Confederate statues is required, what then about Nancy Pelosi’s own mayor father, who once as Baltimore’s mayor dedicated honorific statues to Confederate generals?

If racists understandably do not deserve their names on national shrines, what to do with the iconic liberal graduate program at Princeton, the Woodrow Wilson School of Public and International Affairs? It was named for a president who did more to further segregation and racial prejudice than any chief executive of the 20th century.

Stanford and Yale, coveted brand names of the progressive professional classes, are named after what protesters now deem racists. It is easier to target Fort Bragg, the iconic military base named after a Confederate general, racist and military mediocrity, than to see one’s MBA or doctorate lose its Yale luster, or to confess that a liberal presidential icon perpetuated racism.

Once a cultural revolution gets going, there can be no contextualization of the past, no allowance for human frailty, no consideration of weighing evil vs. good. Eventually, the architects of cultural upheavals always make two miscalculations.

One, they presume that destroying things will never apply to themselves, given their loud virtue signaling.

Two, if they are fingered by the mob, they assume they can somehow use their clout and influence to win exemption.

In other words, once cultural revolutions turn anarchic and eat their own, they lose support. When quiet sympathizers conclude that they too may targeted, to survive they turn on their former icons.

We are seeing that now. Liberal sympathetic bystanders are wondering whether downtown arson and looting will go private and reach their suburban homes. Do they really want their marquee universities or the Washington or Jefferson monuments defaced or renamed? What happens when calling 911 gets a constant busy signal?

When a liberal mayor or Black police chief or progressive governor or white leftist who diverges from the party line is targeted by the mob, then who really is safe?

Answer? No one. And so the cultural revolution sputters to irrelevance.

What deflated the #MeToo movement was the high toll that the accusations took among the Hollywood and cultural elite. Suddenly, progressive celebrities began demanding evidence and insisting on presumed innocence when their careers were destroyed.

What burns out these cultural upheavals is that today’s revolutionary can be denounced as tomorrow’s sellout. No leader wants to share Robespierre’s rendezvous with his own guillotine.

There is one caveat. Sometimes cultural revolutions don’t die out — if they are hijacked by a thug or killer.

The National Socialist movement was an irrelevant nihilist mob of crazies until Adolf Hitler turned it into his personal genocidal cult. A murderous Stalin resuscitated the absurdities of Lenin’s failing Bolshevism.

The present madness will wane like a virus, as it eats its own and terrifies its sympathizers that they may be next — unless, of course, a would-be Napoleon uses a “whiff of grapeshot” and turns the mob into his personal cult.

The armed rapper Raz Simone, who some say lords over the “Capitol Hill Autonomous Zone” in downtown Seattle, so far has neither the diabolic talent nor the resources to spread his anarchy.

Dissident generals may be misguided, but they remain patriots. So far, we have seen no Napoleon emerge to claim that he is only the man who can lead today’s urban revolutionaries to victory.

A final thought: Cultural revolutions not only eventually die without cruel dictators, but they can spawn dramatic pushbacks.

Ronald Reagan was the answer to the radical ’60s. Revolutionaries are now sowing the wind, but they have little idea of the reactive whirlwind they may soon reap.

Victor Davis Hanson is a classicist and historian at Stanford’s Hoover Institution and the author, most recently, of “The Father of Us All: War and History, Ancient and Modern.” Contact via email at author@victorhanson.com.