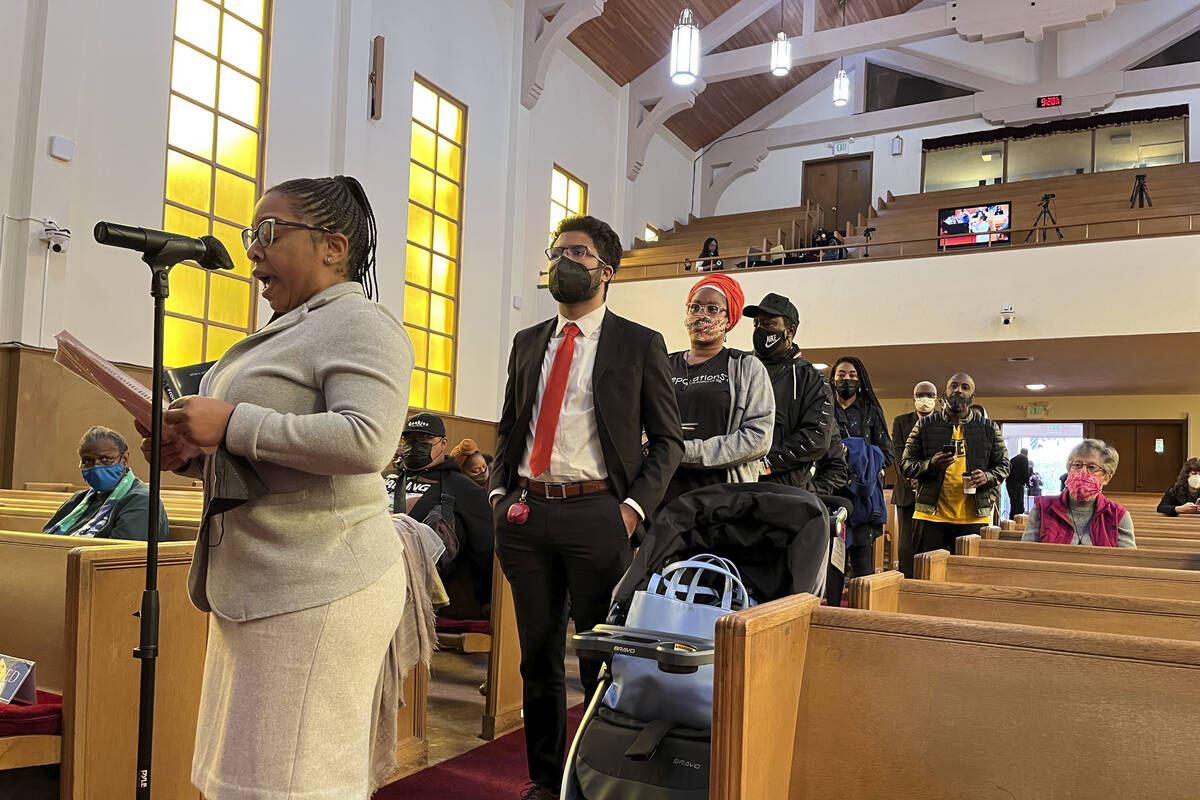 FILE - People line up to speak during a reparations task force meeting at Third Baptist Church in San Francisco on April 13, 2022. A report by California's first in the nation task force on reparations Wednesday, June 1 will document in detail the harms perpetuated by the state against Black people and recommend ways to address those wrongs. (AP Photo/Janie Har, File)

Last week, California’s Reparations Task Force unveiled the potential price tag of paying Black Americans for the harms caused by slavery. It estimated that around $569 billion is due for housing discrimination from 1933 to 1977. That’s more than $220,000 a person. Its final report and recommendations are due out next year.

Here’s the case for reparations. The United States has a long history of enslaving and discriminating against African Americans. Those injustices hurt Black families in a variety of ways, including their ability to buy homes. Owning a house is a major factor in a person’s ability to build wealth. Obstacles to Black homeownership significantly contributed to the current racial wealth gap. The median white household has a net worth of $188,000. For Black households, it’s just $24,000.

To rectify this disparity, which is an example of systemic racism, the government owes Black Americans a hefty financial payout. Reparations are merely a repair for past wrongdoing. Today’s leftists define systemic racism as the existence of a racial disparity, even if the system doesn’t discriminate based on race.

Some of that is obviously true. Slavery and Jim Crow were horrific moral evils. The actions of the past influence the present. There is a racial wealth gap. But this argument ignores something important. People have agency. In a free country, the decisions you make are the most important variable.

You can see this by looking at Black Americans in the early 20th century. Between 1900 and 1950, Black Americans made rapid progress in closing the wealth gap with white Americans. Given the discrimination they faced, that’s an incredible accomplishment.

But “the wealth gap in 2020 is effectively the same value as it was in 1950,” an August paper from the National Bureau of Economic Research found.

If you support reparations, that seems impossible. Unlike in the 1950s, racial discrimination is mostly illegal today, unless your target is Asian Americans applying to college. If your worldview considers only race, less racism must mean reduced racial disparities.

Humans, however, are more than their skin color. Choices matter. Family structure matters. So do the messages society pushes.

One of the most destructive things a free society can tell someone is that their own decisions don’t matter. But that’s the message of reparations and critical race theory more broadly. It tells African Americans that they can’t succeed until the government steps in to help them. That the barriers and challenges they face in their life are beyond their ability to overcome. This isn’t just false and infantilizing. It can become a self-fulfilling prophecy.

Reparations are unjust and plagued by logistical problems, particularly determining eligibility. But they also promote a mindset that leads to the very outcomes their proponents decry.