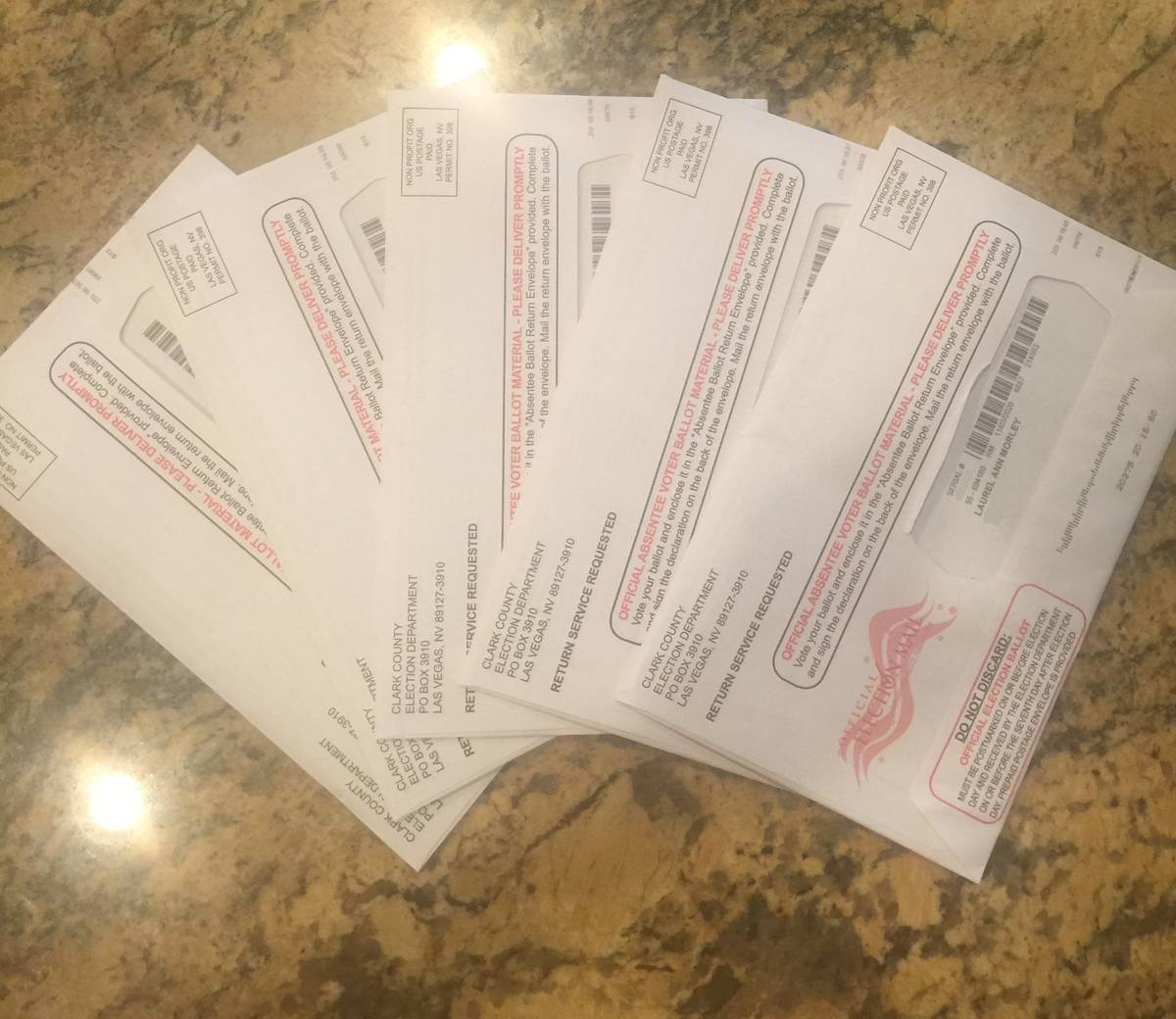 These are the five ballots received by Laurel Morley, who says she only should have received two. Photo taken on Oct. 15, 2020. Courtesy of Laurel Morley. The image has been edited to remove personal information.

If Laurel Morley weren’t honest, she could have voted four times in this election. Blame Nevada’s rushed vote-by-mail system.

Morley, a 25-year Las Vegas resident, lives alone. Recently, she received five ballots in the mail. She should have received only two, one for herself and one for her son who attends an out-of-town university. But she also received two ballots for adult children who moved years ago and plan to vote in other states. And she received a ballot for an aunt who lived with her before passing away in 2019.

Morley is confident that she could have voted four times. She could have forged her aunt’s signature “well enough that it’s not going to be flagged,” she said. “Without a doubt” she could have done the same for her kids’ signatures, she added.

“There’s no way I’m the only household that has this,” she said.

She’s obviously right. Unfortunately, this isn’t the only easy opportunity for fraud that arises from relying on a list riddled with inaccuracies to send unrequested mail ballots.

“It’s most likely the people who don’t even live here anymore,” he said. Geurin said the mail area at his apartment complex isn’t secured and that anyone could have come and taken the ballots.

The only security measure in place for this scenario is signature verification. But as I demonstrated in the primary election, that’s a joke. Election officials accepted ballots with printed names, not cursive signatures. They even accepted a ballot on which the voter didn’t use her normal signature. Instead, I wrote the name using my handwriting, and the voter copied it. The ballot was counted anyway.

That all happened before Democrats further weakened signature verification during this summer’s special session. The bill they passed requires a signature to differ in “multiple, significant and obvious respects” from the signatures on file. Slight dissimilarities are now explicitly not enough to invalidate a ballot.

“I don’t understand how somebody with any intelligence can’t see the potential for fraud,” Morley said.

She’s right. But when it comes to voter fraud, most leftists believe ignorance is bliss. Joe Biden has dismissed concerns about voter fraud as “unfounded.” The mainstream media either downplayed or worked to discredit Project Veritas’ investigation that provided video evidence of widespread vote-by-mail fraud in Minneapolis.

No doubt, they’ll claim the cases above are just isolated incidents. Except, as Nevadans saw during the primary, sending ballots to addresses at which people no longer live is a widespread problem.

It’s also an open opportunity for fraud. Nevadans will never know how much fraud occurred because of these security gaps. People who successfully commit a felony aren’t going to admit it after the election, which many leftists seem to assume, bizarrely.

It’s great to hope that everyone involved in elections is as honest as Morley and Geurin. But that’s wishful thinking, not a strategy to ensure accurate and secure elections.

Note: If this happened to you, email me at vjoecks@reviewjournal.com. Please include a picture.