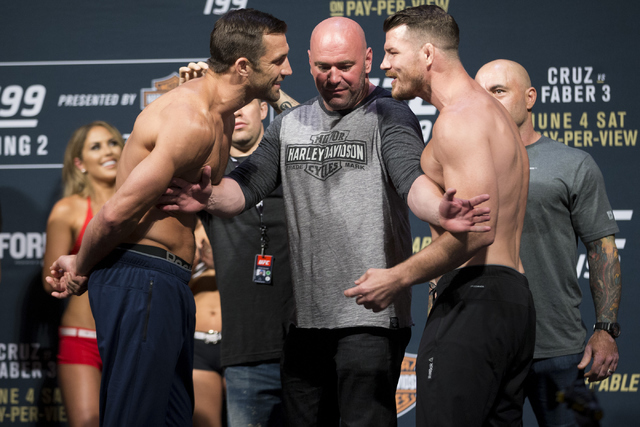 The bullies struck again, and then the pressure to reconsider led to a more sensible action.

I received a text Sunday from a colleague inquiring why the UFC — specifically president Dana White, reportedly on orders from CEO Lorenzo Fertitta — had mixed martial arts’ most popular and respected journalist, along with two of his co-workers, removed from UFC 199 on Saturday at The Forum in Inglewood, California, and “banned for life.”

My response: Because they can.

Because they don’t give a damn what you or I or anyone else thinks.

Because for all the incredibly impressive and innovative ways White and Fertitta turned their original investment into the world’s most powerful MMA brand, their strong-arm tactics and attempts to intimidate media members when they don’t like what is being reported screams not only of a massive sense of insecurity but also of how rich and powerful people often choose to handle such issues.

I’m certainly not entrenched into the MMA world as other media members, but I know enough to understand how respected Ariel Helwani of MMAFighting.com is within the business. His contacts and sources are unrivaled. His job is to report news when he learns of it, and there is nobody in the world better at it in regard to the UFC.

That the UFC on Monday night switched course and said Helwani and those at MMAFighting.com would not be prevented from covering future events was the sort of mature and professional reaction that could have avoided the previous 48 hours of negative but justified press aimed at the company.

More than anything else, the entire fiasco should generate a discussion about how the UFC has for so long dealt with the media, which is to say this: White and Fertitta want to dictate when and how and where you learn of major announcements, and that’s understandable. It’s the right of UFC bosses to pursue such exclusivity, just as it is the right of Helwani and other journalists to follow leads for potential stories without being afraid of banishment.

It seems that’s what the UFC wants when it comes to media.

But there is a bigger issue here than three media members removed from a card because Helwani broke the news that Brock Lesnar would return to the octagon at UFC 200 before the company’s promotional video about it could be shown and Lesnar could appear on ESPN, which he did Monday morning.

It’s bigger than White and Fertitta being angered in the past that Helwani consistently beat the UFC on such announcements, to the point it’s common knowledge that the company had the reporter fired from his job with Fox. Another bully move.

I understand a majority of those reading this couldn’t care less about media and who gets banned or fired and who doesn’t. We don’t, for the most part, matter to you. I get that, and so, too, should more of my peers who have a warped sense of their own inflated worth. Do you know who cared most about this story the last few days? The media.

But the more times the UFC bullies and removes and bans journalists (yes, this isn’t a first), the more others will be fearful of similar actions and choose not to report what could be highly important stories about the health and well-being of fighters or other critical matters that reach beyond a specific card.

And that’s a dangerous precedent to set for everyone, including the consumer.

I actually agree with the reported UFC stance that Helwani should have reached out to the company for comment on the Lesnar story (although he’s certainly not required to), but I also believe had he done so, officials would have either tried to broker a deal with him to hold off on his report and in return promised a future scoop or merely stalled him until they could release the news first.

All of which has happened to other reporters.

I don’t know what seismic force caused White and Fertitta to change their minds about lifting the ban on Helwani. Maybe it was the overwhelmingly bad press from the MMA world and that of mainstream media. Maybe some within their own media relations department, specifically those who have worked for major professional sports leagues, convinced them how amateurish a decision this really was.

The discussion should begin here: As much as White and Fertitta have desired mainstream acceptance of their sport, do you really believe this nonsense would happen in the NFL or NBA or NHL or Major League Baseball?

Does anyone for a second think if Peter King broke a major NFL news story during a Cowboys-Giants game without seeking league comment that commissioner Roger Goodell would telephone the press box and have him removed and banned?

Or that the same thing would happen to Buster Olney in baseball or Adrian Wojnarowski with the NBA?

Of course not, because for as many nonmedia issues as those leagues have, there are checks and balances and oversight and writing organizations and some sense of professionalism regarding these matters.

There isn’t in the UFC, because the two people in charge know they’re still going to sell thousands of tickets and millions of pay per views, and a card such as UFC 200 is still going to be an enormous success.

As long as it has powerful vehicles such as ESPN and Fox in its corner — and why wouldn’t they when each makes so much money off the other? — the UFC can do things like demand the sport’s most popular and influential journalist meet White in a back area of The Forum during a card to be dressed down verbally and kicked out of the venue along with two co-workers.

The only thing missing was a portrait of Michael Corleone.

Our newspaper covers MMA intently and should given the UFC’s global popularity and because it makes its home in Las Vegas. We even dedicated a website (coveringthecage.com) to it and have a lead reporter in Adam Hill who is tremendously skilled and knowledgeable.

But while we rightly give the sport a significant presence, it doesn’t mean that automatically comes with our respect. Money and power can get certain people most things in life, but admiration isn’t one.

The schoolyard bullies don’t give a damn about that, but at least they felt enough outside pressure or listened to enough people the past few days to change course and right what was a serious wrong.