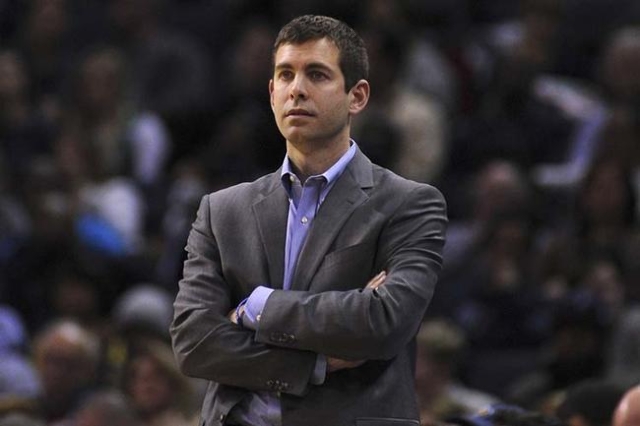 LOGAN, Utah — Brad Stevens is usually seen in a suit, because I’m not sure the whole red-and-white-striped shirt and bobble hat would play well when coaching the Boston Celtics. But when it comes to identifying UNLV’s next head basketball coach, those investigating potential candidates should consider a theme based on a series of children’s books.

Where’s the next Brad Stevens?

He’s out there, somewhere, and it’s not as if he’s hidden among double-page spread illustrations depicting dozens or more people doing a variety of amusing things.

It’s not as if he’s concealed in some safari park or in outer space.

The tricky part, however, continues to be finding him.

The Rebels play their third game under interim head coach Todd Simon against Utah State on Tuesday night at the Spectrum, where UNLV on the court continues its season-long journey while those off it continue to speculate who might ultimately be put in charge of the program on a full-time basis.

If we’re really starting the bar at Rick Pitino, well, I suppose making a run at one of the greatest college coaches in history solves the whole wanting-a-big-name issue. But when the time comes — and odds favor it better than not — that UNLV simply can’t convince such a proven winner to take its bait, another road would be smart to travel.

Ten years ago, few basketball fans outside Hinkle Fieldhouse knew Stevens. But then he was promoted from assistant to head coach at Butler in 2007 and soon the college world understood what the small school six miles north of downtown Indianapolis had in him.

Stevens won 77 percent of his games over the next six years, advanced the school with an enrollment of 4,800 to consecutive Final Fours and in 2013 was hired to coach the Celtics. There are few brighter, better young head coaches in sports today. He’s 39.

This was North Carolina coach Roy Williams at the Final Four in 2013: “Coach Stevens is a Hall of Fame coach. He’s just not old enough for you to call him that yet. Brad Stevens is not 12-4 in the NCAA tournament because he coaches the same team in March that he coaches in November. I would say 24 hours from now, when I talk to you again, (Butler) will be a completely different team because they’re going to get better.”

It’s the sort of skill Stevens owns — to make teams he coaches improve as a season drags on — that has been lacking with the Rebels for some time. Few coaches at any level are more obsessed with the process of creating progress than Stevens. He is focused on the pursuit of growth more than trophies. He never gets too high or low.

Age isn’t as much the concern as potential when it comes to who should land the UNLV job, as in what a head coach who might lack the advantages the Rebels offer could do with such facilities and sense of tradition and enrollment access for prospects.

This one takes time. Research. Really good basketball minds asking the right questions and understanding those variables that are most important to winning in 2016.

You could have 10-15 candidates that one way or another own the sort of strengths you’re looking for in identifying the next Stevens, and still choose the wrong guy.

The first part will be the toughest for UNLV officials: Looking beyond their desire to win a press conference. Pitino is a rare exception, but there couldn’t be a more short-sided approach than seeking a big name for the sake of it. UNLV isn’t a Top 50 program today, and it needs far more in a coach than a recognizable face and flashy headlines.

If it feels confident in the basketball knowledge of those vetting candidates — and I’m not holding my breath on that one — UNLV searching for the next Stevens could prove a fascinating exercise that culminates with a wonderful hire.

It absolutely should take them down the road of considering Marvin Menzies at New Mexico State, who in a state where Big Brother in Albuquerque receives the lion’s share of financial support, the Aggies have blossomed into a WAC power and made the last five NCAA Tournaments. Few nationally have done more with less than Menzies.

It could cause UNLV not to repeat the mistake of Kansas State four years ago in passing over Brad Underwood, now 72-13 at Stephen F. Austin and one of the country’s best coaches the average fan couldn’t identify.

It should convince them to call Bryce Drew at Valparaiso and inquire if he would ever leave a place that is so close to his heart and that of his family, if a guy who is 107-45 as head coach would finally be interested in upgrading from the Horizon League.

It could even mean they cast an eye toward a few former Findlay Prep coaches. Mike Peck is in the Hall of Fame at Findlay and has head coaching experience in the NBA Development League. He’s now an assistant at Santa Clara and has close ties to some of the nation’s top prep recruits, most importantly Centennial High junior point guard Troy Brown.

It would also make sense that if the Rebels continue to win under Simon and earn what is likely going to be the only NCAA berth out of the Mountain West, his audition would lead to him being among the serious candidates.

You could add numerous names to the list above, affordable coaches who if handed those advantages UNLV owns, could return the Rebels to a Top 25 standing. Maybe it’s Steve Henson at Oklahoma. Maybe it’s someone within the Mountain West. Maybe it’s Dan Majerle at Grand Canyon.

This much is true: The next Brad Stevens is out there, somewhere.

Is UNLV smart enough to look for him?

More importantly, once it thinks beyond the small-time view that only a big name will do, is it basketball savvy enough to find him?