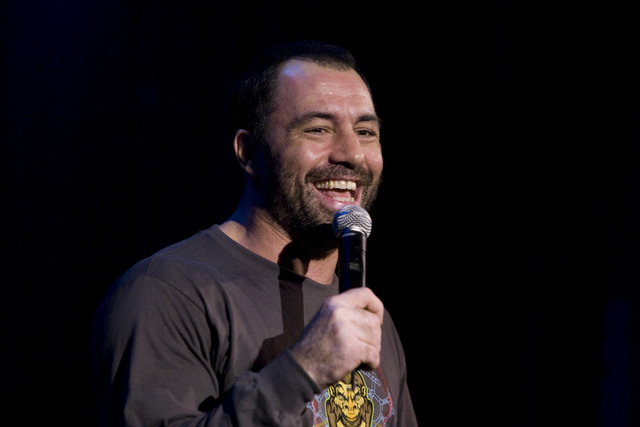 In the old days before the Internet, I could have told you Joe Rogan is a great comedian and you would have taken my word for it as a newspaperman.

But now you can go on Ticketmaster.com and see for yourself that Rogan earned a rating of four-and-one-half stars out of five stars, as judged by real people who bought tickets to his shows, then posted rave reviews.

Better yet, you can listen to “The Joe Rogan Experience” podcast for free — one of the best podcasts in the world — and judge for yourself.

I should feel sad about that diminishment of my newspaper power over the masses. But I love it. Power to the people, baby.

I still wield a Godzilla amount of power — a power I am using to make Rogan talk to me about his comedy show, coming Friday to the Mirage.

Rogan and I talked about the Internet, and I told him journalists are more careful with their words, since everyone can publicly call us out when we do something dumb.

“Comics are the same way. You used to get away with a show that wasn’t so good. But now, someone can go on Reddit, or go on your message board, or send you a personal Tweet, and say, ‘Hey man, I saw your show last night and you were a little off.’

“And you’ve gotta face that. I think that’s good, though,” because it’s quality control, Rogan said.

“That’s true,” I said, “but you have to have a strong constitution to handle harsh criticism online.”

“Yes,” Rogan said. “I treat it like snake venom. You get a little bit of a bite here and there, and you get immune to it (online criticism). But if you get a big dose of it all at once, it can kill you.”

Rogan said another benefit of online criticism is it makes people more accountable when they act like asses.

“There’s this whole wall of human beings that will Tweet at you if you do something (awful). I think that’s a good thing,” he said.

As we all know, there are cruel people who Tweet mean things with no basis in fact or kindness. Rogan said that’s why school should teach kids how to Facebook.

“We’re not even aware of what a huge impact on life it has had,” Rogan said. “We just think it’s normal to look at your phone and have the answer to any question in the world.”

I asked Rogan a question I ask myself: In 100 years, wonders will be invented even better than the Internet, but I will be dead, so what will I miss?

“I think eventually we’re going to be able to implant ideas into the mind — directly — the same way you download something from the Internet into your hard drive,” he said

That would be nice. Or scary.

“What is that H.G. Wells quote — ‘History is a race between education and catastrophe,’ ” Rogan said.

I think in 100 years there will be a sex machine like the one in Woody Allen’s “Sleeper.”

I can’t finish that quote. My editors would murder me.