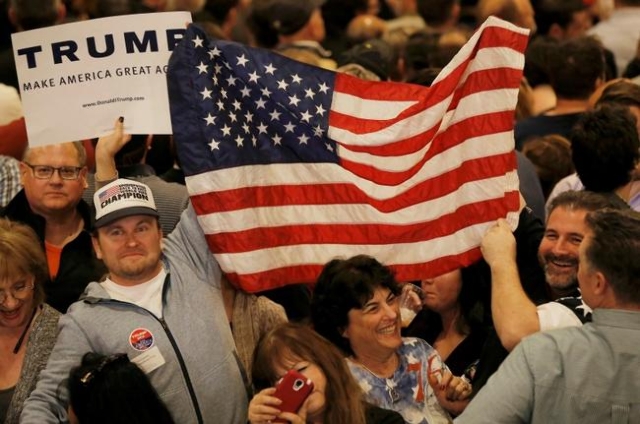 Supporters of Donald Trump celebrate after Trump was declared the winner of the Nevada Republican caucuses by the television networks, at his Nevada caucus night rally in Las Vegas. REUTERS/Jim Young

Sensitive readers were deeply offended, and that’s no mean feat in the current political climate.

How dare the columnist, admittedly a lowly wretch of uncertain parentage, call their Donald Trump a “fascist Fabian,” a “comb-over Mussolini,” and even “an impeccably groomed horse’s ass” in a recent attack questioning the appeal and ascendancy of the billionaire pitchman to front-runner status in the Republican presidential circus.

Not only did I resort to name-calling and owe that fine American with the nativist rhetoric and the cotton candy hairdo an apology, they said, but I ought to use more appropriate language in a family newspaper.

As for the apology, for now I say neigh. But Trump’s incensed acolytes make a point about parading such unctuous and inarticulate speech before the Review-Journal’s gentle readers. It’s downright uncouth and entirely unbecoming. Even an ink-stained gutter snipe ought to know better.

For some reason, Trump’s cheering masses are far more forgiving of their man, who had generated millions of followers by hurling insults and epithets on Twitter. Although he’s cleaned up his act more recently, in previous stump speeches he’s let fly with F-bombs and used language that would make a Teamster blush. In the current campaign he’s gone out of his way to offend minorities, women, Muslims and even Pope Francis during speeches and on the debate stage — and he receives ovations for his efforts from his growing legion of admirers.

Some would say a person courting the nation to become its next president might be better served refraining from calling other people “morons” and “losers.” But it’s all music to the ears of Trump’s fans.

And his Don Rickles-on-meth rhetoric paid off in Nevada. Trump trounced his flat-footed opponents. The upcoming Super Tuesday votes are expected to bring Trump more delegates and accolades as Marco Rubio and Ted Cruz grow increasingly desperate for any victory.

But the Trump brigade’s critique reminds me that when it comes to criticism I really need to up my game. To that end, I have enlisted noted writing coach William Shakespeare to help improve my primitive skills of sarcasm.

Perhaps I ought to have called Trump, as Shakespeare wrote in “The Taming of the Shrew,” “A whoreson beetle-headed, flap-eared knave.” “Thou art a boil, a plague sore or embossed carbuncle” from “King Lear” has a certain ring to it, don’t you think?

I might have written of Trump’s questionable character, “He’s a most notable coward, an infinite and endless liar, an hourly promise-breaker.” A horse’s derriere seems almost docile compared to Shakespeare’s line from “All’s Well That Ends Well.”

Another line from that play that might yet gain traction is, “The soul of this man is in his clothes.” But then, the same could be said for most politicians.

Let’s not forget Trump might have been referred to as a “long-tongued babbling gossip,” or of being suspected of possessing an intellect consisting of, “Not so much brain as ear wax.”

And if that falls short of the mark there’s always this descriptive line from “Love’s Labours Lost.” It might be said of Trump’s campaign that he’s “The anointed sovereign of sighs and groans, Liege of all loiterers and malcontents.” And yet, he’s winning.

When it came to name-calling, Shakespeare was in a class by himself. The question is whether Americans should send someone with such an uncivilized tongue to the White House.

But, upon reflection, I’ve decided a mea culpa is in order. In retrospect, I never should have called high-flying presidential candidate Donald Trump a horse’s ass.

To all horses who read the column and took offense, please accept my apologies.