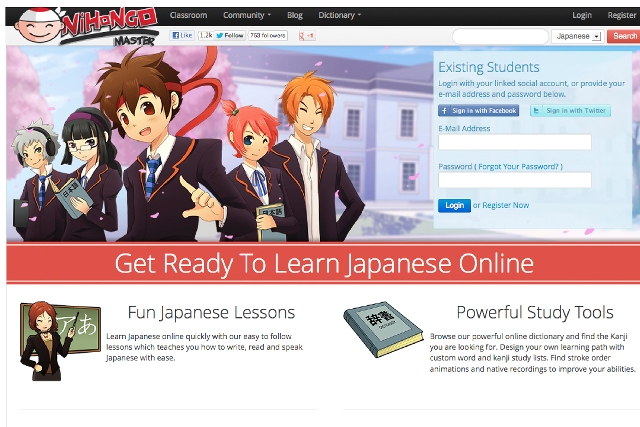 A Las Vegas tech company that isn’t geared toward the usual suspects — gaming, tourism or hospitality— might struggle to find success or even investors.

But Taylor Dondich believes he has created a profitable and growing business in Sin City by simplifying language learning online.

Starting with Japanese, Dondich’s creation, Nihongo Master Inc., is designed as a game using points and badges as prizes to reward students as their fluency improves.

“The conventional methods for developing coherence in a second language are antiquated,” said Dondich, Nihongo Master’s CEO and founder. “Most platforms simply adhere to a call-and-response method where students repeat words and sounds from a teacher. This does not help one to fully understand or memorize what they’re learning.”

Dondich said his idea was “to change the way people approach studying a language.”

Nihongo Master was launched in February 2012 as an online Japanese dictionary. Dondich then began to privately test his website with the help of hundreds of people interested in a different way of learning Japanese.

“I’m a Japanese learner, so I’m very passionate about the language,” he said. “We garnered interest from over 300 testers. The site was very raw, and we couldn’t have launched without the help of the community.”

Dondich, 31, said he got the idea in late 2011 after visiting Japan. The website launched officially Jan. 4; Dondich declined to disclose startup costs.

Nihongo Master has optional social elements, including the ability to synchronize with Facebook and Twitter. Dondich said this allows students to compete against their friends, master levels together, and share their awards and accomplishments.

Dondich said the cost to complete the courses is $12 dollars a month, with most students needing two years of constant learning to be fluent in Japanese.

“We wanted it to be affordable, compared to other programs out there,” he said. “There is also no time limit on our free content.”

Students can use Nihongo Master on tablet and laptop computers or smartphones , he said.

Dondich hired Jeff Skiles as the site’s Japanese instructor. Skiles, who has studied Asian languages and civilizations at Amherst and Yale universities, taught Japanese in Kyoto and Yokohama, Japan, and at Yale.

“We are a small startup, with four employees,” Skiles said. “We have users as young as 9 years old learning Japanese. Now that’s something.”

Dondich runs the business out of his northeast Las Vegas home.

He said his company is developing new sites that cover the mastery of Spanish, German, French, Italian and even English as a second language.

He said the company also is focused on saving languages that are fading away as a result of globalization.

“There are a lot of endangered languages, and you don’t realize it until you start looking,” Dondich said. “A lot of these are from Indian tribes. For example, Mono in California has 50 speakers left worldwide.”

The Mono language is classified as Uto-Aztecan and is considered “severely endangered,” according to the Endangered Language Project, which was created by the Alliance of Linguistic Diversity.

“There are some languages that are spoken by very small numbers (of people), with no written text on how to learn the language,” Dondich said.

UNESCO estimates that if nothing is done, half of 6,000 plus languages spoken today will disappear by the end of the century.