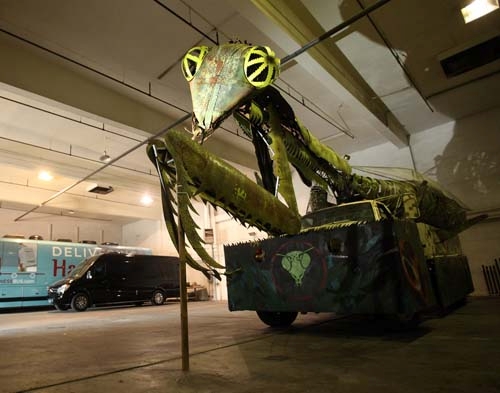 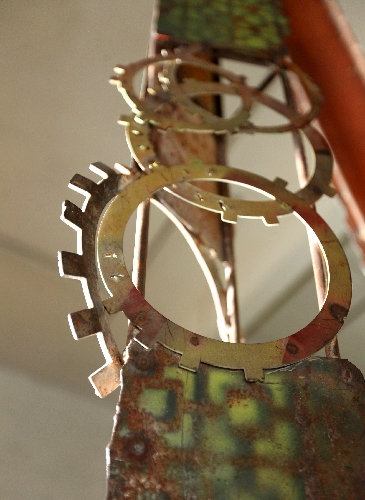 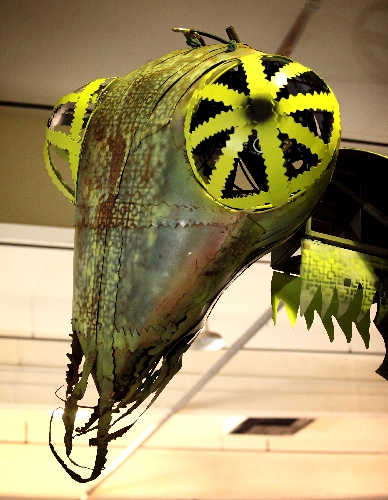 If you love radical self-expression and huge, outlandish sculptures but hate getting dirty in hard-to-reach places, you’re in luck.

It’s an attempt to infuse Hsieh’s community-building project with the artistic sensibility of Burning Man, an annual event that draws as many as 60,000 people to a dry lake bed in the Black Rock Desert.

"Tony asked them to submit anything from small projects to large projects, but he likes fire," said Mimi Pham, a Downtown Project contractor who has worked with Hsieh on personal projects for eight years.

At first glance the partnership between Burning Man, which is best known for bending virtually all conventions, seems incongruous with Las Vegas, a place most often known for artistic sensibilities that start with a sharply dressed Frank Sinatra and end at fat Elvis.

But people with a bead on Las Vegas culture say the city is more avant-garde than it gets credit for. Just look a few miles south of downtown, past the city limits at the Strip, where a replica medieval castle, reproductions of the New York skyline and Venice’s Piazza San Marco and a fire-spitting imitation volcano greet tens of millions of visitors annually. Those projects are audacious in their own right.

"No one is allowed to call any idea stupid in Las Vegas," said Dayvid Figler, a longtime Las Vegas lawyer, poet, cultural observer and frequenter of downtown. "We built this city on stupid and it is the smartest thing we ever did."

Leslie Bocskor, chairman of the Society of Experimental Arts and Learning, a group that supports collaborative community arts projects and oversaw a Burning Man inspired event downtown in March, said playa-inspired sculpture has surface similarities to ambitious Las Vegas attractions such as the Mirage volcano, but connects with people on a deeper level.

"Although on its surface it is spectacle, underneath it serves to bring people together," he said discussing the blending of Las Vegas and Burning Man cultures.

He has shared his own work at Burning Man, including a fire-spewing praying mantis that can rise to 55-feet-tall and is now in Las Vegas. It’s set to be installed at a retail and night life center made from shipping containers planned for a vacant spot near Fremont and 7th streets downtown.

"Whether people know it or not, Burning Man has been penetrating mainstream culture for years," Jellum said. "Lady Gaga, she wouldn’t get a second look on the playa."

The agreement between the Downtown Project and Burning Man Project is for six months, although both sides expect to extend it, and contains several provisions.

Burning Man organizers will compile works of art for the Downtown Project to review for potential installation in Las Vegas, hire a liaison to live and work in Las Vegas and consult with First Friday Las Vegas on ways to enhance event participation.

"You will never re-create what they have done up there (at Burning Man), and that is not the intent," said First Friday organizer Joey Vanas, who took oversight of First Friday events last year at Hsieh’s behest. "It is just to take some of the principles and some of the inspiration."

The Downtown Project has agreed to explore ways to store and display hundreds of mutant vehicles, which are artistically modified cars that are popular attractions at Burning Man but impractical, to say the least, to drive on public roads.

"Whether we have to build a warehouse and store the art cars, these are just ideas," Pham said. "We don’t really know how realistic this is."

It’s also a chance for Burning Man organizers to share their values with a broader audience. Burning Man, founded at Baker Beach in San Francisco in 1986, is formed around a community that builds, populates and departs within a few weeks.

The temporary community was little more than a small encampment during the event’s early days in Northern California. Since moving to Nevada in 1991 it has grown to an outpost with tens of thousands of residents, complete with streets, neighborhoods, zoning, an airport and law enforcement, all of which is built and then dismantled by participants, leaving little or no trace in the desert.

By establishing the agreement with the Downtown Project, Burning Man can use Las Vegas as a platform for art and ideas, and to share its 10 principles, which include radical self-expression, decommodification and civic responsibility.

While Burning Man does have hundreds of regional ambassadors around the world, the Downtown Project agreement is a first, said Marian Goodell, director of business and communications for the Burning Man Project.

"It is pretty common that people go to Burning Man and want to manifest the culture outside of Black Rock City," Goodell said. "It is not common that someone in an urban redevelopment endeavor contacts us to bring us into that endeavor."

Las Vegas is already home to regional representatives, and in March the Society for Experimental Arts and Learning hosted a burn of its own when artists ignited a 20-foot wooden sculpture of a showgirl called Lucky Lady Lucy.

The event attracted tens of thousands of people to First Friday, showing the burner culture can be a big draw downtown.

"There is a strong community of them; it is getting stronger and stronger," Vanas said.

By strengthening the connection, Hsieh says Las Vegas can add another layer of culture to the tech startups, small businesses, new residents and nightlife the Downtown Project seeks to cultivate.

"It is not about, ‘Let’s try to make downtown Vegas a mini Burning Man,’ " Hsieh said. "It is really about combining all these different perspectives and so on that can help build a unique community for downtown Las Vegas."