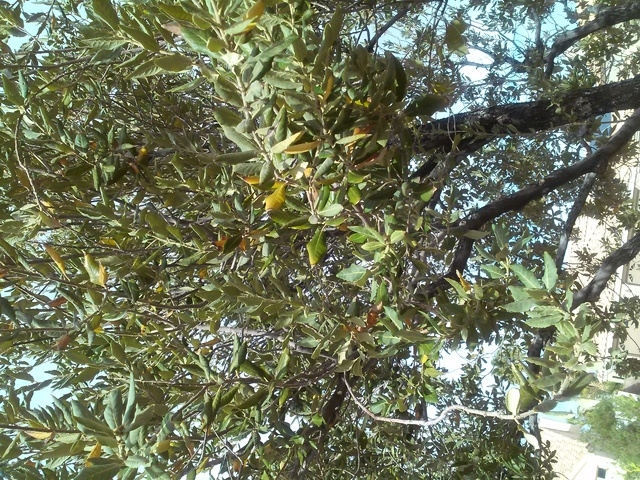 COURTESY Evergreen trees such as southern live or holly oak display leaf drop starting in the spring at the same time as new growth. 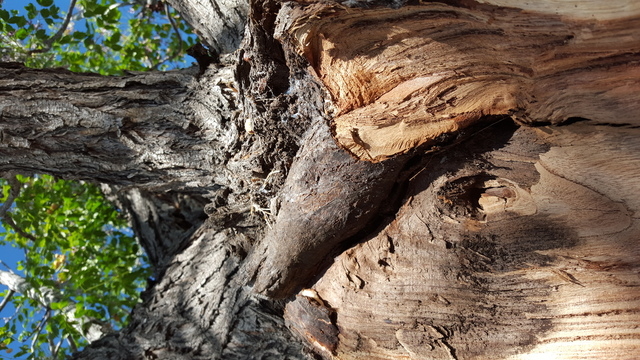 COURTESY The inside of the chinaberry tree is virtually dead regardless whether it is healthy or not.

Q: My evergreen oak tree is more than 20 years old. Some of the leaves are turning yellow and dropping. While there is some new growth, it is not as vigorous as prior years. The tree is on drip irrigation and gets a deep watering twice a month. There is a 5-foot circle underneath with no rock. It also was deep-root fertilized in February by a commercial company.

A: If the yellowing and leaf drop is from older growth and not excessive, it is probably normal. Evergreen trees such as southern live or holly oak display leaf drop starting in the spring at the same time as new growth.

As new growth develops, older leaves begin to drop. All evergreen trees, including pine trees, show leaf or needle drop of the older ones and retain the younger ones until they also become too old and drop.

It is in the tree’s best interest to drop older leaves. If leaf drop is occurring on new growth then I would be more concerned.

Q: How long do you keep fronds tied up after planting Mexican fan palms?

A: When large palm trees are delivered to a property for planting, frequently the fronds are gathered together and tied up in a bunch at the top. If they are wrapped correctly the fronds will bust open these ties as it pushes new growth.

If it is wrapped incorrectly, they may have to be cut but this is seldom. It has been cool. Give it more time and wait to see if it does it on its own.

Otherwise cutting the ties can be done any time after planting. The purpose of tying them is to make the tree easier to load and transport on a truck, unload and plant. This decreases damage to the fronds during transport and planting.

Q: Our chinaberry tree broke off after the winds a few days ago. I saw all this dark wood inside the tree and it was dried out. This tree has withstood way stronger winds than what we just had, which concerns me. Is this anything to be concerned about?

A: The inside of any tree, including chinaberry or Texas umbrella tree, is virtually dead regardless whether it is healthy or not. This dead area is called the “heartwood” of the tree. The only living part of its trunk is a small cylinder of wood surrounding the heartwood and just under the bark. This is called the “sapwood.”

As a tree gets bigger it grows in two ways; it grows taller and limbs become longer, called primary growth. It also gets “fatter” or bigger in diameter. This growth is called secondary growth. Secondary growth is responsible for sapwood remaining just under the bark as the tree gets “fatter.” As sapwood grows outward it leaves behind the dead heartwood in its interior.

The dryness of the wood may be dry rot as the heartwood is disappearing or rotting away. Frequently, interior rotting of the tree is accompanied by soft growths attached to the trunk. These are a type of mushroom called “bracket fungi” or conks and are strong indicators that some form of rotting is occurring.

If you want to keep the tree strong, make sure it receives enough water and fertilize it once a year. If it does not, the tree becomes weaker and much easier to damage during strong winds.

Q: I put a Baja fairy duster plant in the ground about two months ago in a spot that gets full sun. It’s not on a drip system but I deep water by hand every week. The leaves are turning light green. Is this normal for growth or am I watering too often?

A: Baja fairy duster is a beautiful little desert plant native to the Baja area of California and Mexico. It grows receiving water infrequently. It grows bigger if it is given a little extra water and fertilizer. But don’t do this too often or there can be problems.

I see from the picture you sent that this plant has wood chip mulch surrounding it on the soil surface. Wood chips are a good idea, but they help preserve water in the soil. This can result in too much water.

Don’t let the wood mulch come in contact with the stems of this plant or it could cause the stems to rot. Keep it away from the stems by at least 6 inches.

Back off a bit on how often you water. The plant originates from Baja and gets very infrequent water so it will do well if watered every couple of weeks deeply. Fertilize it once or twice a year during late winter and just before flowering.

The other reason for yellowing can be lack of nitrogen so fertilize it lightly with a flower fertilizer.

Q: I have an oro blanco mini grapefruit along with other citrus growing in my backyard. All of them have flowered and set fruit except for this grapefruit. My friend has one of these too and hers has given her fruit. What do I do to get this finicky grapefruit to produce fruit?

A: If your backyard does not get too cold then it should produce well for you. Citrus’ biggest problem here is winter cold damage, freezing back and late spring frosts that eliminate flowers and fruit.

Grapefruit is a citrus that has the best potential for Las Vegas but oro blanco is a grapefruit and pomelo cross. It may be a bit more sensitive to winter cold and late freezes than traditional grapefruit, such as marsh or ruby red.

Oro blanco is harvested in the fall when temperatures are dropping around October. It is at this time that it has its best color and flavor.

It flowers in the spring. The tree should be loaded with flowers if there have been no freezing temperatures. About 2 percent of all the flowers will result in fruit. The rest of the flowers and young fruit are aborted by the tree.

The other possibility is spring pruning. Citrus, in general, are seldom pruned unless it is needed. Excessive pruning in the spring can remove spring flowers before they come out. Pruning also can result in no flowers and no fruit. It is best to prune these trees just after harvest in October.

Irregular watering can cause the tree to drop flowers and fruit. Use a surface wood chip mulch to help keep the soil moisture from fluctuating too much and fruit/flower drop.