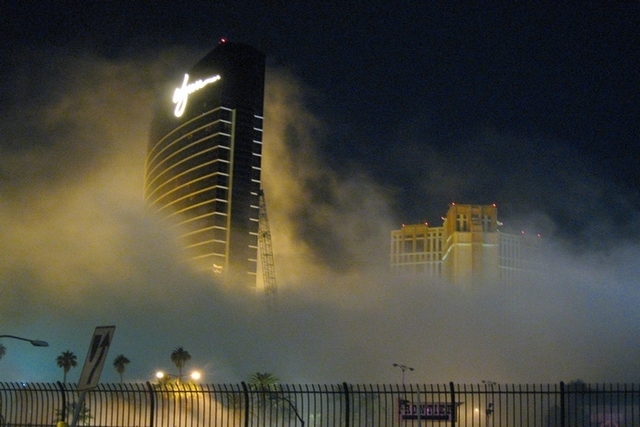 Smoke and dust shroud the Wynn Hotel-Casino across Las Vegas Boulevard after the implosion of the New Frontier Hotel-Casino on Tuesday, Nov. 13, 2007. (Mark Damon/Special to the Las Vegas Review-Journal)

Las Vegas is full of mysteries, even if you’ve lived here your entire life. That said, we want to solve them, so we asked what questions about Las Vegas you’ve always wanted answered. We’ll tackle them one by one in Knowing Vegas.

This week’s question is explosive. How many implosions have there been?

It’s certainly a sight to see, and when a casino closes its doors, sometimes the only solution is to blow it up — in a legal and controlled environment, of course.

”Las Vegas has always found a way to reinvent itself over the years, and one of the most entertaining ways this is made possible is through the process of implosion. It is one of the quickest and painless ways that an old building can be wiped away to make room for a new one.” –We Do It All Vegas

“The Dunes opened as a low rise resort in 1955. When the North Tower was added in 1964, it was one of the finest and largest hotels on the strip. The South Tower was added in 1979,” Vegas Today and Tomorrow reports. “Steve Wynn bought the Dunes and started the implosion trend on Oct. 27th, 1993, with the implosion of the Dunes North Tower. With a pyrotechnics show worthy of a Hollywood blockbuster, the Dunes met her fiery death.”

This off-Strip construction was one of the last of six casinos owned by billionaire Howard Hughes, Online Nevada reports. Once in the race for tallest structure in Nevada at 15 stories — beat out by The Mint at 26 stories — this “space age” building eventually fell into financial trouble and struggled to stay open for decades. The silver lining? The Landmark said an explosive goodbye Hollywood style. A scene from Warner Bros. film “Mars Attack” features the implosion of the casino.

Where the Venetian stands today was once the ol’ stomping grounds of “The Rat Pack,” The Sands hotel and casino. Unfortunately for the historical site, owner Sheldon Adelson decided to axe the casino to make room for the current italian-influenced resort. “The Sands lives on, however, both visually in the original ‘Ocean’s Eleven’ film and on musical albums recorded live at the hotel by the likes of Sinatra, Davis, Jr. and others,” Vegas.com reports.

The Hacienda was demolished for yet another bigger, better and newer resort. “The Hacienda was the southernmost resort on the Las Vegas Strip standing as gatekeeper into Vegas for 30+ years. It was purchased by Circus-Circus in 1995 and imploded to make way for Mandalay Bay in a nationally televised event on December 31, 1996,” Vegas Tripping reports. So, without explosives, there would be no sharks.

The Aladdin’s history is pretty complicated. The resort passed through several hands due to a stroke, a death, poor planning and overall, just bad luck. Perhaps, the owners used their genie wishes too quickly because Aladdin was imploded in the Spring of 1998 to make way for Planet Hollywood, according to Vegas Chatter.

The first El Rancho was destroyed by a fire in the 1960s, Vegas Tripping reports. The second one was blown to smithereens at the turn of the century and replaced by Turnberry Towers and the ill-fated Fontainebleau resort. This is starting to sound like another cursed plot of land because the Fontainebleau was over before it even begun. Due to structural and economic hardships, this doomed casino could be the next kaboom.

According to Classic Vegas, the loss of the Desert Inn weighed heavy on the hearts of many longtime locals. They watched the others fall throughout the years, but the demolition of this property threatened livelihood. Over 1,000 jobs were lost and golf course residents were forced to move. But those helming the project, businessmen Steve Wynn and Irwin Molasky, weren’t afraid to shell out the big bucks to get that prime real estate. Today, it’s the Wynn.

Prior to 2000, the Castaways was known as the Showboat. The Castaways claim to fame was its massive, 106 lane bowling alley. It was the largest bowling alley in the United States, according to Bowling Digital. Sadly, bankruptcy struck once again and the remodeled casino was done away with, the Associated Press reports.

Previously known at The Shendandoah in the 1980s, Bourbon Street, didn’t work it. “More than 160 pounds of explosives did the job without interrupting power or damaging any nearby properties. Bourbon Street, over a quarter of a century old, came crashing down in less than ten seconds,” Vegas Tripping reports.

This one was just an eye sore. “It would be an understatement to say that the Boardwalk hotel was an anomaly on the south end of the Strip. Its faux-Ferris wheel façade, replete with dummy passengers, was looking more than just out-of-place surrounded by such newer neighbors as the MGM Grand, New York-New York and Monte Carlo resorts. So when MGM Grand acquired it in 2000, its death certificate was effectively signed,” Vegas.com reports.

This resort and casino had the perfect name — it had the star power, a rich history surrounding the likes of Frank Sinatra and the story that inspired “Casino,”and it eventually was turned to dust, according to the New York Times. Out with the old, in with the new. A $4 million complex called Echelon was scheduled to be built in the shadow of the doomed Stardust, but that project was put on hold, so another group swooped in and laid claim on the area. Could this be the location of the Las Vegas’ next mega resort?

Elvis made his Vegas debut at the New Frontier in ‘56. Sigfried & Roy got their start here. This was the last standing resort in town once owned by Howard Hughes, Vegas. com reports, but the historical structure was demolished to prepare for a much larger endeavor. This area has remained vacant for several years following its implosion, but now, an Australian billionaire hopes to construct a new resort by 2015.