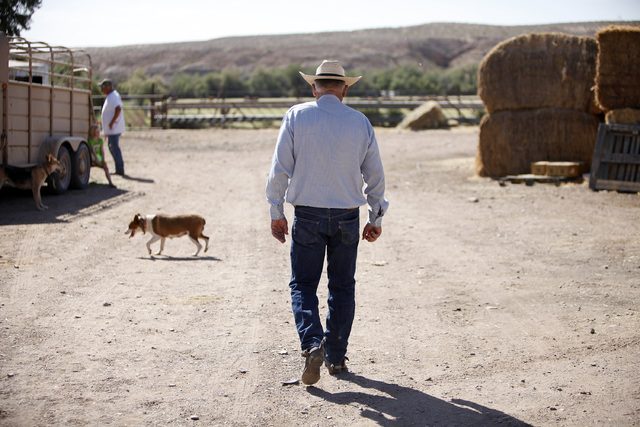 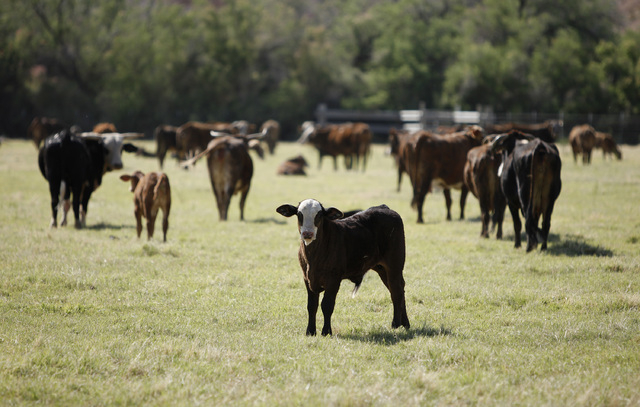 Some of the cattle that were rounded up by the Bureau of Land Management are back at the Bundy ranch near Bunkerville, Nev. Wednesday, April 16, 2014. (John Locher/Las Vegas Review-Journal) 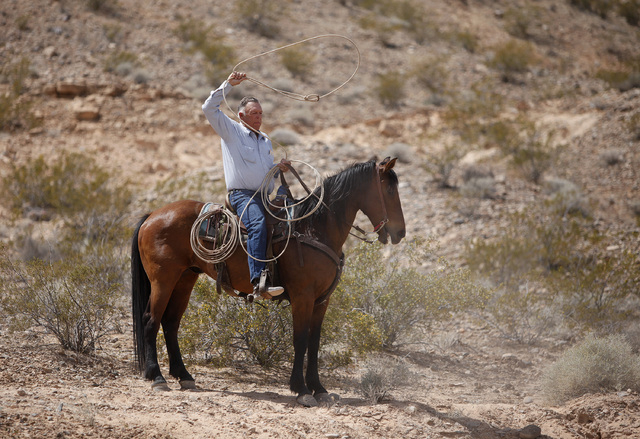 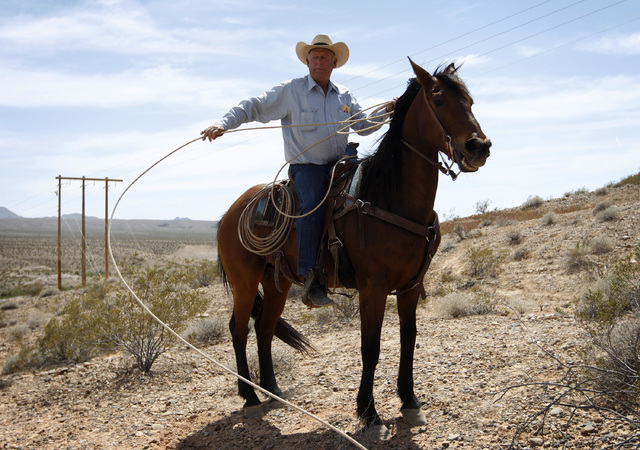 Rancher Cliven Bundy pulls in a rope while on horseback at a protest area near Bunkerville, Nev. Wednesday, April 16, 2014. (John Locher/Las Vegas Review-Journal) 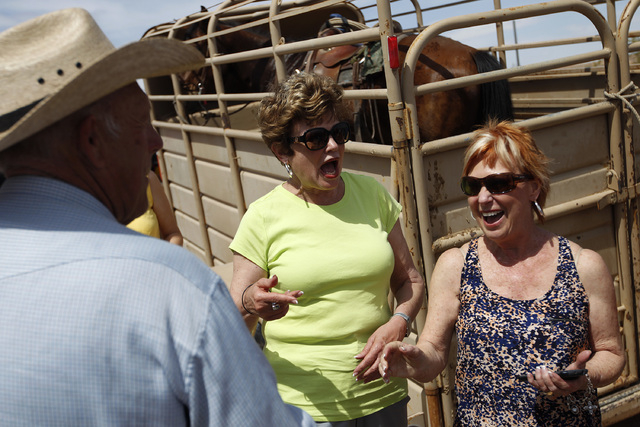 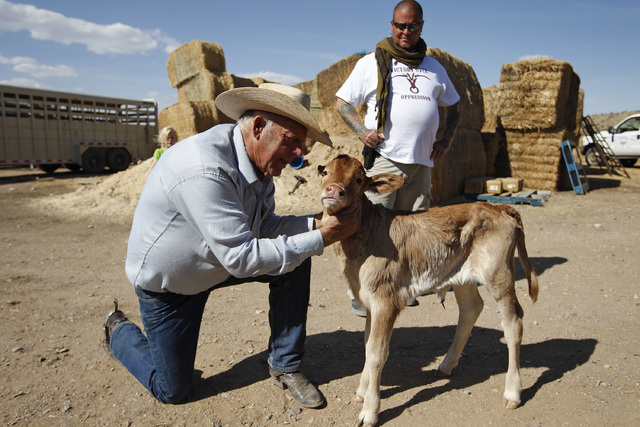 Rancher Cliven Bundy looks a a calf on his ranch near Bunkerville, Nev. Wednesday, April 16, 2014. According to Bundy the calf was born while in a corral set up by the Bureau of Land Management. (John Locher/Las Vegas Review-Journal) 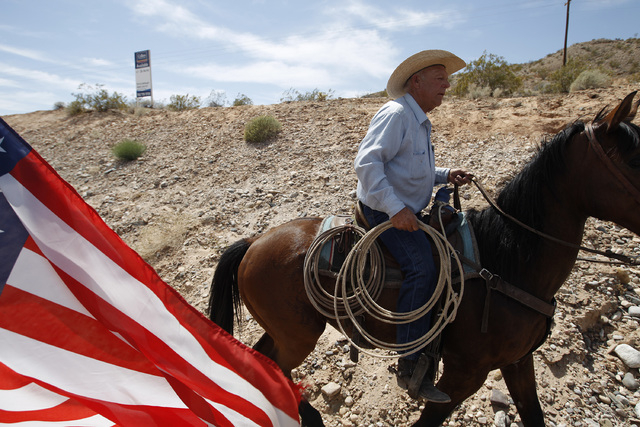 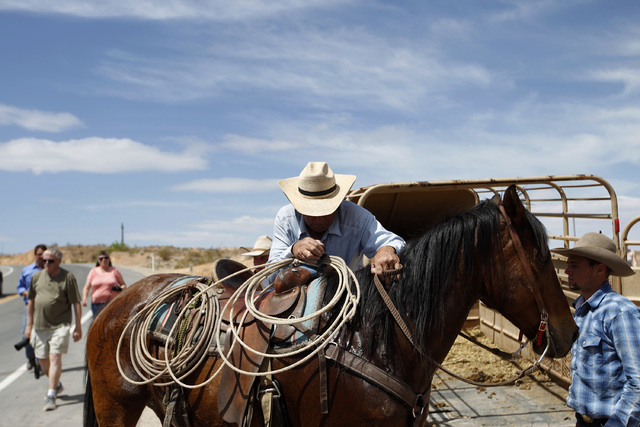 Rancher Cliven Bundy gets off a horse at a protest area near Bunkerville, Nev. Wednesday, April 16, 2014. (John Locher/Las Vegas Review-Journal) 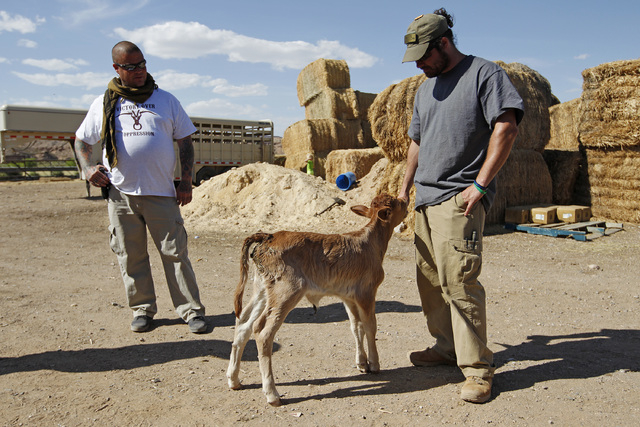 Booda Cavalier, right, and Reid Henrichs look a a calf on the Bundy ranch near Bunkerville, Nev. Wednesday, April 16, 2014. The two are part of the security detail around Cliven Bundy. According to Bundy, the calf was born in a corral set up by the Bureau of Land Management. (John Locher/Las Vegas Review-Journal) 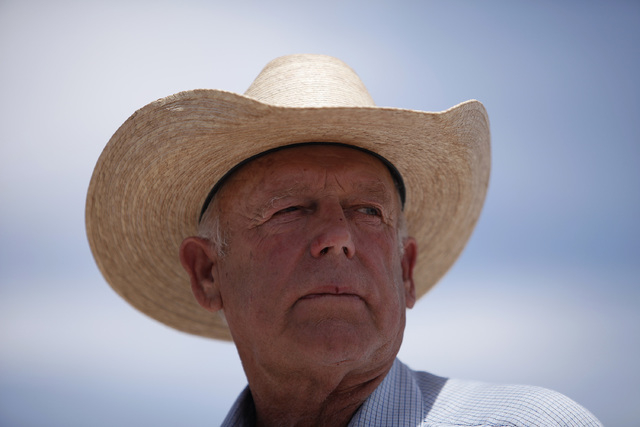 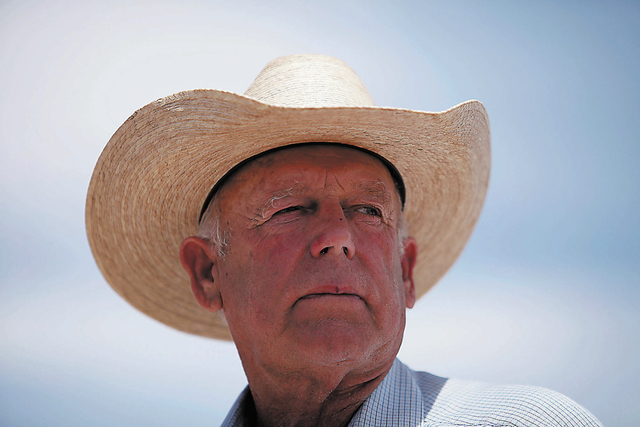 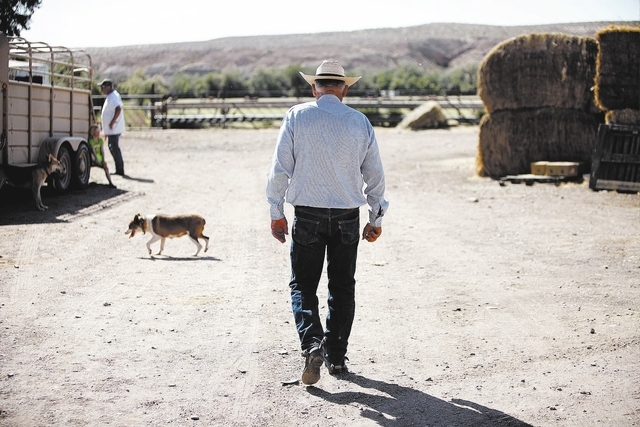 BUNKERVILLE — The Bureau of Land Management has tried to contact Cliven Bundy ever since the federal agency released the rancher’s cattle Saturday while facing a horde of protesters, but Bundy hasn’t opened any of the written messages.

His son, Ammon Bundy, said four certified letters from the BLM arrived at the ranch Tuesday. So far, the 67-year-old Bunkerville resident has chosen not to open the envelopes.

The word came Wednesday afternoon, when the Bundy family detailed property losses they said were caused by federal agents and BLM contract employees during the roundup. That includes unspecified numbers of dead cattle, the family said, and water trough equipment.

Ammon Bundy said the family has found what they believe is a grave with their cattle buried in it. They also said they found a bull carcass with at least one gunshot they believe was fired from the air, probably from a helicopter.

The Bundy battle with the BLM started two decades ago, when the family patriarch quit paying grazing fees to the agency. Cliven Bundy now owes about $1 million in back fees. He quit paying in a dispute with the agency over range restrictions intended to protect the threatened desert tortoise.

Federal court orders gave the BLM approval to start rounding up Bundy cattle on federal land. That started earlier this month but came to an abrupt halt on Saturday after tensions escalated into a standoff with Bundy’s supporters, some armed militia members.

The family estimated Wednesday that they have received about 350 head of cattle from the release on Saturday.

BLM spokesman Craig Leff would not comment Wednesday on the letters sent to Bundy. The agency also did not provide copies of the letters to the Review-Journal on Wednesday after the newspaper requested them or respond to Bundy family statements about damages to water equipment and dead and injured cattle.

After the cattle were released on Saturday, the BLM has said it would pursue other administrative and judicial remedies. Since then, the agency has refused to say what options are being considered in the wake of failing to enforce a federal court order.

Whatever the future may hold, Ammon Bundy expressed confidence that the national attention drawn by the issue will result in a better outcome in the court system, if it comes to that.

“The difference now is that we the people are watching, so now there’s a possibility that we can actually go through these courts and get the truth and the justice maybe because there’s so many people watching that a judge will be very careful … even if he is corrupt, and possibly we may get it right,” Bundy said.

On Wednesday, the Bundys were still assessing damages to water equipment and tallying numbers of dead and injured cattle, which they are documenting with photographs.

In a tour of his 160-acre ranch, Cliven Bundy showed the Review-Journal a 1-year-old bull calf with an injured leg.

“That animal, if he lives, he’ll be lucky,” Cliven Bundy said.

A brown calf — born in the BLM’s corral shortly before the agency released the cattle on Saturday — was at the ranch.

Among the damaged property on the public lands the family has used for range is a destroyed 12,000-gallon water tank. It was cut in pieces, Ryan Bundy said.

The water equipment system pulls water from mountain springs, using gravity flow and pipes to supply tanks, which then feed into troughs.

Ryan Bundy said the cows will find their way to water despite the equipment damage.

“Our cattle are smart,” Ryan Bundy said. “They’ll go to where they need.”

The hundreds of protesters who gathered over the weekend now number in the dozens. An armed security detail of volunteers still watches over the ranch house, stopping vehicles driving onto the property about 80 miles northeast of Las Vegas.

Bevalyn Marshall, 52, and her husband, Larry Marshall, 67, are among those who still show up every day, making the drive from Scenic, Ariz. The federal government’s gotten way too big and needs to be “cut back to size,” Marshall said.

They plan to keep making the trek out, holding signs of protest along the highway and resting in the shade of a canopy.

“We’re going to keep it alive,” Bevalyn Marshall said. “We’re not going to let it die.”