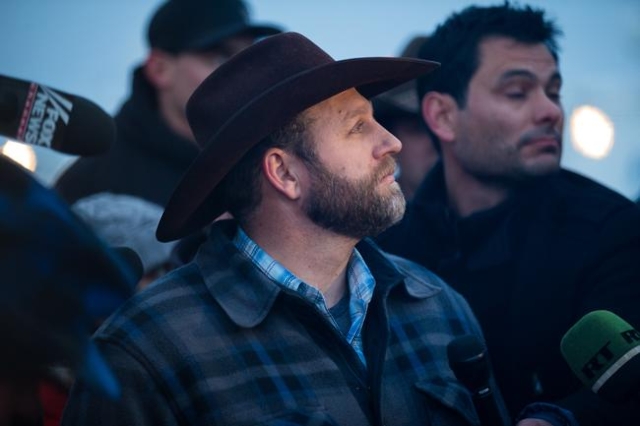 Ammon Bundy speaks with reporters after meeting with Harney County Sheriff Dave Ward, at the Malheur National Wildlife Refuge headquarters near Burns, Ore. on Thursday, Jan. 7, 2016. The pair met about 10 miles from the refuge. Bundy, who is the son of Nevada Rancher Cliven Bundy, is occupying the refuge with anti-government protesters. Chase Stevens/Las Vegas Review-Journal Follow @csstevensphoto 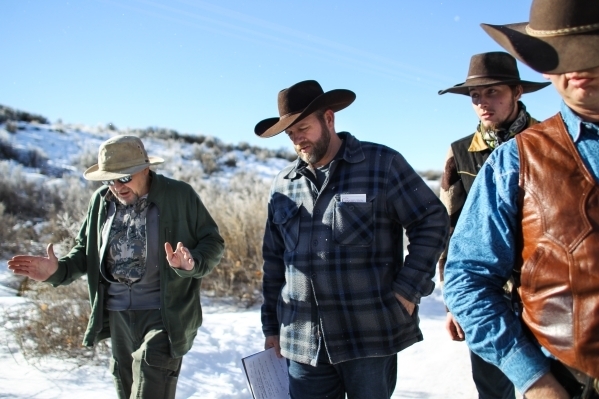 Steve Atkins, left, of Burns, Ore. voices his discontent over the occupation with Ammon Bundy, center, at Malheur National Wildlife Refuge headquarters near Burns, Ore. on Friday, Jan. 8, 2016. Bundy, who is the son of Nevada Rancher Cliven Bundy, is occupying the refuge with anti-government protesters, many of which are armed. (Chase Stevens/Las Vegas Review-Journal) 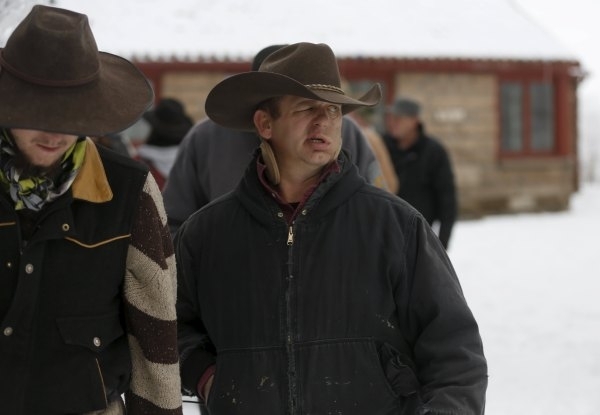 Ryan Bundy leaves a meeting with the Pacific Patriots Network, who are attempting to resolve the occupation at the Malheur National Wildlife Refuge near Burns, Oregon, January 9, 2016. (REUTERS/Jim Urquhart) 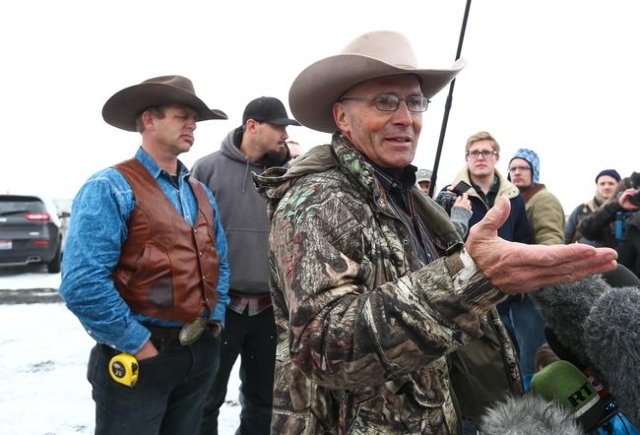 Arizona rancher and anti-government protester LaVoy Finicum, right, talks with reporters as Ryan Bundy, left, looks on, by the entrance of the Malheur National Wildlife Refuge headquarters, which the group is occupying, near Burns, Ore. on Thursday, Jan. 7, 2016. The protestoes, many of them armed, are led by Ammon Bundy, son of Nevada rancher Cliven Bundy. Chase Stevens/Las Vegas Review-Journal Follow @csstevensphoto 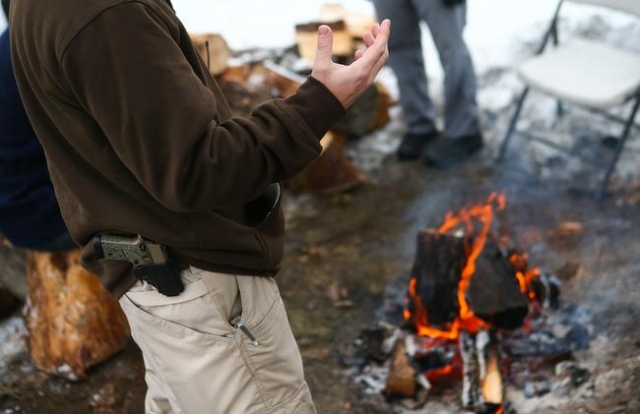 Anti-government protester Jon Ritzheimer talks by a fire while guarding the entrance of the Malheur National Wildlife Refuge headquarters, which the group is occupying, near Burns, Ore. on Thursday, Jan. 7, 2016. The protesters, many of them armed, are led by Ammon Bundy, son of Nevada rancher Cliven Bundy. Chase Stevens/Las Vegas Review-Journal Follow @csstevensphoto 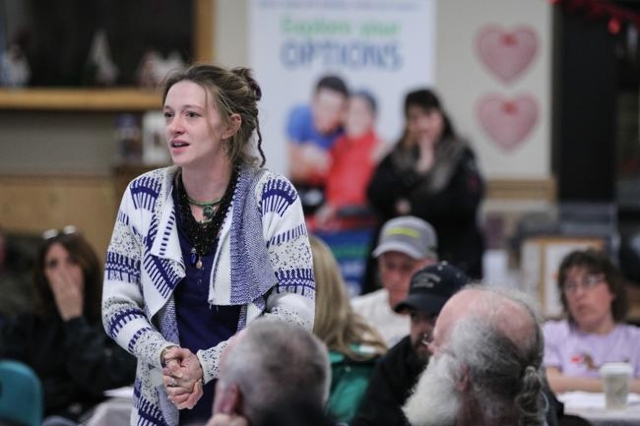 A woman speaks during a meeting held by the Harney County Committee of Safety in Burns, Ore. on Friday, Jan. 8, 2016. The committee was established in December to address issues such as overreach of the federal government and land rights, as well as the anti-government activists occupying the Malhuer National Wildlife Refuge. Chase Stevens/Las Vegas Review-Journal Follow @csstevensphoto

BURNS, Ore. — The standoff in Oregon has attracted more than cowboy-hatted ranchers preaching the Constitution and denouncing the Bureau of Land Management.

Ultimately, ranchers and militia-styled people rekindled an informal alliance with roots in Bunkerville, reuniting based on their distrust of the federal government and strong belief that freedoms are eroding.

It’s a belief system that led the group to take possession of and occupy the headquarters of the Malheur National Wildlife Refuge in southeast Oregon on Jan. 2, all in hopes of sparking a national movement that leads to the transfer of federal public lands in the West to states and counties.

The same factions joined up during the Bunkerville standoff in April 2014, which attracted some of the same individuals. They call themselves patriots, militiamen and constitutional purists, considering their views of the Constitution to be superior above all others. In Bunkerville, the Bureau of Land Management rounded up the cattle of rancher Cliven Bundy after he refused to pay grazing fees for using public land and owed more than $1 million to the federal government. Bundy, backed by armed self-styled militiamen and other supporters, had a standoff with federal agents who released the cattle to avoid bloodshed.

Now, they’ve given themselves a name: “Citizens for Constitutional Freedom.”

To others, the latest standoff, led by Bundy’s sons Ammon and Ryan, is about more than a romanticized Western-themed stand for freedom on land. Rather, it’s a lawless approach that continues to flourish in the aftermath of the 2014 standoff, as Bundy’s cows have grazed freely on public lands without repercussions, critics say.

“The problem was they were allowed to pull a similar stunt at their ranch, and nothing ever happened,” said Barrett Kaiser, senior adviser to the Center for Western Priorities, a nonpartisan conservation organization.

The Bundys started their occupation after a peaceful protest on Jan. 2 in support of Oregon ranchers Dwight Hammond Jr. and his son, Steven Hammond. A jury convicted the Hammonds in 2012 of starting fires on public lands, burning about 140 acres. Federal prosecutors said the fires were set to cover up poaching.

The Hammonds, whose federal prison sentences began last week, have maintained the fires were set to protect their property from invasive plants and wildfires. The Hammonds’ attorney has said the protesters don’t speak for his clients.

“The Bundys are trying to make this about the Hammond family, but they are just simply exploiting the Hammonds to further a vast right-wing extremist ideology that we are seeing pervade Western states,” Kaiser said.

He added, “Everyone wants to see this end peacefully, of course. But you shouldn’t be allowed to exploit a ranching family, hijack an entire community, steal a refuge, threaten violence, all in a self-aggrandizing perversion of what you think the Constitution actually says and then simply go home.”

Yet the Bundys are steadfast in insisting that their motives are pure.

“This is about correcting wrongs that have been happening for a very long time,” said Ryan Bundy, who ranches with his father. “This is about restoring the Constitution. We want the people here to understand and begin to implement their own rights.”

Jon Ritzheimer, a Marine Corps veteran who served for 11 years, wore a pistol as he chatted with reporters and talked about his background.

The 32-year-old Phoenix man has been in the news before, but not for armed standoffs. He has organized anti-Muslim rallies, drawing headlines for his views.

“This isn’t about me,” he said, adding that the media has “demonized” him for his background.

Still, he kept talking, saying the media attention is because he is “outspoken” about Islam and has a “politically incorrect” way of expressing his sentiments.

“What would drive somebody to kill themselves?” he said, interrupting himself when he saw reporters taking notes. “You guys are writing this down, but I don’t even want this to be the narrative.”

But he kept talking about his opinions on Islam.

“I was fascinated with it,” he said. “What would drive somebody to blow themselves up to kill others that don’t believe like them? It’s not just as simple as it’s a religion. No, there’s a lot to it.”

At times, Ritzheimer has been part of the Bundys’ security detail, wearing sunglasses and standing in the background as Ammon Bundy talked to reporters at daily press briefings.

He stressed that this standoff isn’t about religion and that he only brought up the topic when asked.

“We’re shedding light on the fact that the BLM is a tyrannical oppressive force out here.”

Like the others, he has declined to reveal the precise count of people at the refuge. The reason: “operational security.”

Asked why the group is armed, he said, “Because our government is armed. Research Waco and Ruby Ridge.” But, he added, “There’s no rush to come in guns blazing. Let’s talk about this and get the truth out there, and then let’s do what’s right.”

Blaine Cooper, 36, of Dewey-Humboldt, Ariz., was at the 2014 standoff in Bunkerville.

“Each operation’s been kind of different,” Cooper said. “Bunkerville was more of an aggressive move by the BLM to send in hired guns to kill innocent American people.”

He said he is prepared to defend himself “if I have to,” but added, “I want to go home to my family just like they do. Diplomatic means is always better.”

Cooper describes himself as a “full-time patriot.”

“I’m sick of government overreach,” he said. “The sole character of who we are as Americans is we we want to live in peace without a boot being on our face.”

To be sure, not everyone venturing out to the wildlife refuge is armed.

Doug Spears, 52, a welder from Longview, Wash., said he heard about the standoff and wanted to come see for himself what it’s about.

While acknowledging he doesn’t know much about the specifics, Spears said he hasn’t seen anything troubling.

“From what I can see, their motives are pure,” Spears said.

LaVoy Finicum, 55, a northern Arizona rancher, rode behind the Bundys in April 2014 during their standoff with federal agents in Southern Nevada.

He came to this standoff and frequently talks to reporters, espousing the need for lands to be handed over to local control of counties and states.

Finicum is hoping that this standoff ends the same way the 2014 standoff did.

“God was very gracious, and everybody went home safe, which is what we want now,” Finicum said.

Much like the days leading up to the Bunkerville armed standoff with law enforcement, Finicum and others insist that the firearms are only for protection.

“We want you to know the only reason we have guns here is for our own personal protection and safety,” he said. “We should never ever point guns at each other, so let’s make sure that is the understood thing.”

Joe Kingen, 35, who ranches south of the refuge in Fields, near the Nevada border, came out to visit the Bundys at the refuge.

He said ranchers get squeezed from multiple directions, including government regulations that restrict grazing, the price of fuel and the price of beef.

Kingen added he welcomes the attention on the plight of ranchers.