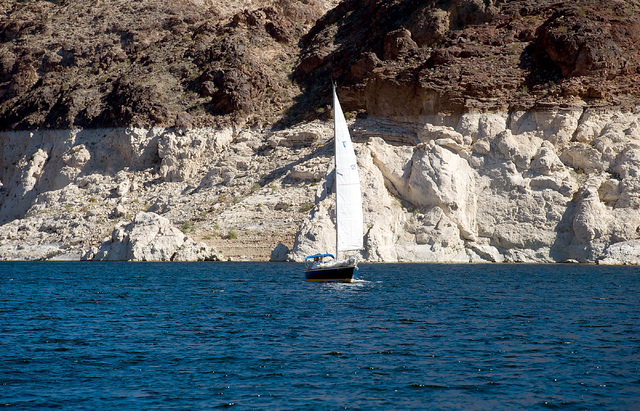 A sailboat cruises on Lake Mead on Sunday, Oct. 20, 2013. The white "bathtub ring" in the background shows the drop in the lake level in recent years. California will soon start drawing down the water it has banked in Lake Mead - removing 100,000 to 150,000 acre-feet, and dropping the lake surface by as much as two feet. (Mark Damon/Las Vegas Review-Journal) 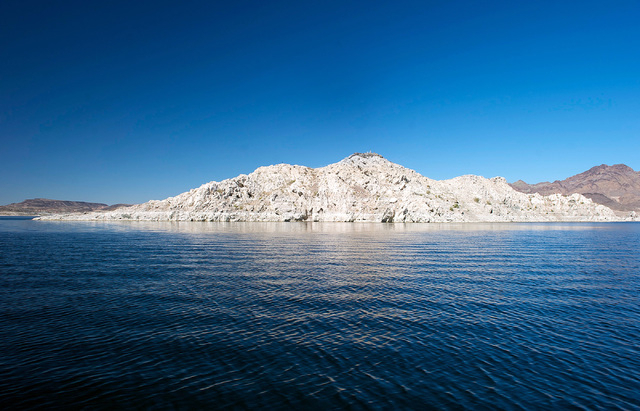 White, chalky residue covers a hill that was once submerged on Lake Mead on Sunday, Oct. 20, 2013. California will soon start drawing down the water it has banked in Lake Mead - removing 100,000 to 150,000 acre-feet, and dropping the lake surface by as much as two feet. (Mark Damon/Las Vegas Review-Journal) 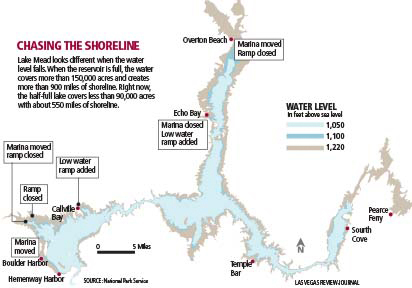 Punishing drought in California could force that state to make a sizable withdrawal from a virtual water bank in Lake Mead this year, even as the reservoir shrinks closer to an all-time low and an unprecedented shortage declaration.

California’s largest municipal water supply agency, the Metropolitan Water District of Southern California, took about 80,000 acre-feet from its water savings account in the lake last year. Now the agency is contemplating a withdrawal at least twice that size, enough to cause the surface of the massive reservoir to drop two feet and the shoreline to recede by as much as 60 feet.

“Things are so bad in California, unless it starts raining like crazy we are probably going to take another 150,000 to 200,000 acre-feet this year,” said Bill Hasencamp, Metropolitan’s manager of Colorado River resources.

Nevada’s annual share of the river is 300,000 acre-feet, by far the smallest among the seven states that draw from the Colorado. One acre-foot is enough to supply at least two average valley homes for one year.

But if Las Vegas water officials are worried about a run on the Lake Mead water bank by California, they certainly aren’t showing it.

Metropolitan deposited the water, so Metropolitan has every right to withdraw it, said J.C. Davis, spokesman for the Southern Nevada Water Authority.

“The people making an issue of this only see the negative, because water is being taken out,” he said. “But if Met hadn’t banked it in the first place, that water wouldn’t be there.”

Without the water stored in Lake Mead so far by California, Nevada, Arizona and Mexico, Davis said, the surface of the reservoir formed by Hoover Dam would be at least 10 feet lower than it is right now.

A BANK WITHIN ITS BANKS

Nevada, California and Arizona won the right to store unused Colorado River water in Lake Mead as part of an interstate agreement enacted in 2007.

Mexico started banking water in the lake a few years later, after a major earthquake in April 2010 damaged canals and pipelines that country uses to divert water from the Colorado south of the border. A treaty amendment struck in 2012 expanded Mexico’s ability to store water in the reservoir.

There are restrictions on how much of the banked water, officially known as Intentionally Created Surplus, can be taken out in a single year. California’s annual withdrawals are capped at 400,000 acre-feet, Nevada’s at 300,000 acre-feet. The bank cannot be tapped during a declared shortage on the river or if federal officials determine that a withdrawal would tip the river into shortage.

All Intentionally Created Surplus accounts are subject to a 3 percent reduction each year — call it a bank fee — to account for evaporation.

Since the program began, the Southern Nevada Water Authority has socked away some 540,000 acre-feet and used about 16,000 acre-feet, leaving it with the largest bank account right now. Metropolitan has stored more water than the authority, but Southern California has withdrawn more of its water.

Nevada water officials have a keen interested in keeping Lake Mead as full as possible, since about 70 percent of the state’s population depends on the reservoir for 90 percent of its water supply.

The surface of the lake has fallen more than 100 feet over the past 12 years amid persistent drought on the overtaxed Colorado River. If the lake level drops another 35 feet, it will trigger the first federal shortage declaration and force Arizona and Nevada to trim their use of river water. If the lake drops 60 feet, the authority will lose the use of one of two intake pipes that supply the Las Vegas Valley with nearly all of its water.

Current projections by the U.S. Bureau of Reclamation call for Lake Mead to shrink by 20 feet by the end of the year and 30 feet by April 2015, when it could hit a record low. For now, though, the lake is expected to hover just above the trigger point for a federal shortage at least through January 2016.

In other words, just a few extra feet of water in Lake Mead could make a big difference.

Even so, Davis said Southern Nevada officials have made no effort to dissuade their counterparts in California from making a withdrawal from the water bank.

“It’s for a rainy day, or rather a non-rainy day,” he said. “If you want to create a banking system and you want people to participate in it, you can’t admonish them every time they make a withdrawal. That’s the whole point of a banking system: to give people the flexibility to take the water when they need it.”

‘THE DRIEST YEAR EVER’

And the drought hasn’t let up this year. Before the most recent storms passed through, Los Angeles had received just 2½ inches of rain in the past 12 months. The city gets about 15 inches of rain in a typical year.

Gov. Jerry Brown declared a statewide drought emergency in January, and Met’s board of directors followed that last month by issuing a water supply alert to spur conservation ahead of possible mandatory water-use restrictions.

Conditions have been so bad that Met won’t be allowed to take any water this year from the State Water Project that links Southern California to rivers and lakes some 500 miles to the north.

“We are relying heavily on the Colorado River,” Hasencamp said.

Met, as his agency is commonly known, supplies about half of the water used by 19 million Southern California residents. It serves 26 member utilities in six counties spanning an area that stretches from the Mexican border to Oxnard, north of Los Angeles, and from the coast to the Inland Empire.

Agency spokesman Bob Muir said Met currently has about 2.4 million acre-feet of water stored in “various accounts,” enough to meet its demand for a little more than one year.

“As soon as it gets wet again in California, we’ll start storing water and putting it in Lake Mead,” Muir said.

“We were hoping we could keep that in there,” he said. “But we’re still keeping an account balance. We’re not taking it all out.” 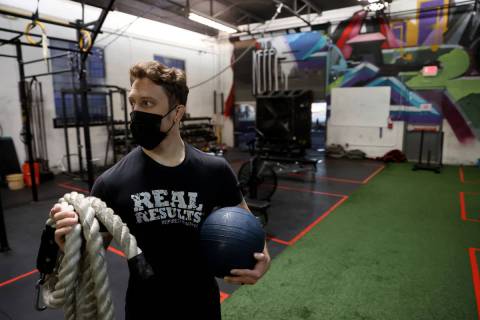